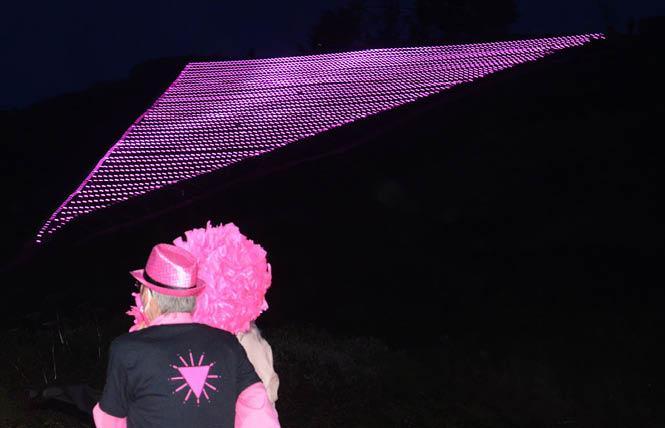 Preparations are underway for this year's 26th pink triangle installation, which will see it lighted at nighttime atop Twin Peaks for Pride Month in June.

Due to the COVID-19 pandemic, social distancing restrictions will result in the giant display appearing different during the daytime again this year. Only the outline of the symbol, which will still be highly visible, will be installed, co-founder Patrick Carney stated. Nighttime lighting will then take place in the center area. Once again, the installation is being done by Illuminate, the group behind the Bay Lights on the San Francisco-Oakland Bay Bridge. Ben Davis, Illuminate founder and chief visionary officer, revealed to the Bay Area Reporter last week new plans his organization and others have for the Music Concourse Bandshell in Golden Gate Park that will see it pay tribute to Black history.

There are some volunteer opportunities this year, Carney explained. The outline of the pink triangle will be set up Saturday, May 29, at noon. About 25 people are needed.

This year's lighting ceremony will take place Tuesday, June 1, at 8 p.m. It will feature San Francisco Mayor London Breed and other dignitaries, who will be wearing masks and physically distanced. People are encouraged to watch from their rooftop, balcony, or window along Market Street, or any high point in San Francisco or beyond. Carney said the ceremony will also be livestreamed.

Carney stated that after the pink triangle goes up, volunteers are needed to serve as site ambassadors to monitor it from May 30-July 1. Various shifts are available. Volunteers are also needed July 1 to help take down the outline.

For more information on the pink triangle, click here.

Survey on LGBTQ smokers
We Breathe, a program that aims to reduce LGBTQ tobacco-related disparities, is working with Harder+Company Community Research to conduct a short survey of people who identify as LGBTQ and who use or have used tobacco products. According to a news release, the survey will help We Breathe identify ways to prevent and reduce tobacco use among LGBTQ people.

Qualifying participants who take the survey will receive a $15 gift card. The survey, which takes about 10 minutes, is available here.

Sisters seek queer artists
It seems like murals are in the news these days, what with the honey bears being defaced at the San Francisco LGBT Community Center and that organization's pledge to use queer muralists for the next one. Now, the San Francisco Sisters of Perpetual Indulgence (who had a honey bear painted by artist fnnch that pays tribute to them) are looking for queer artists and owners of queer spaces who would like a mural.

According to a news release, the Sisters, a charitable drag nun group, have announced a community-sourced art initiative for elevating and uplifting the diversity of LGBTQIA+ artists throughout the Bay Area.

"We have secured funding to provide the artists the opportunity to create public art in queer spaces that inspire, challenge, celebrate, mourn, and evoke the multifaceted perspectives of our community, and we are asking for help from you," the release states, adding that conversations were held following the debut of the fnnch Sisters honey bear outside the Powerhouse bar in the South of Market neighborhood.

"We are listening," the release adds.

The project will include a call to the community to help create a volunteer selections board of independent artist non-Sisters, chaired by the San Francisco Abbess, Sister Tilda NexTime. As locations are secured, the board will announce the space, and information around submissions (the community it honors, themes, size, and materials to use) to the public via the Sisters' social media platforms. The community would then submit ideas. Each project will have a proposed due date for submissions, as well as a submissions town hall, where each applicant will be invited to speak before the committee.

"The board will choose the finalists to be submitted to the owner of the space for a final selection, and we'll foot the bills," the release states.

The Sisters are currently looking for the first space.

Owners of buildings and artists can email the Sisters with thoughts and feedback. People should contact Sister Celine Dionysus (celine@thesisters.org) or NextTime (tilde@thesisters.org).

City College offers in-person registration
City College of San Francisco is offering in-person registration for the summer and fall semesters at six locations throughout the city. The school's popular English as a second language course will meet Monday-Thursday from June 7-July 15 There are morning, afternoon, and evening noncredit classes available and all are free, according to a news release.

The society is looking for people who are inspiring, whose award-worthy leadership has gone unrecognized, and whose work should be held up as an example to others.