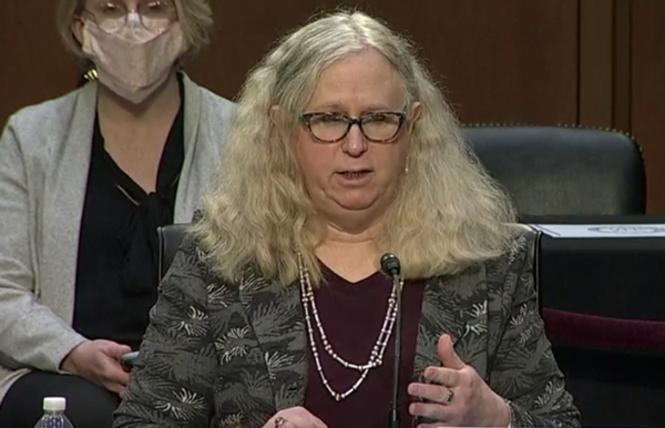 Assistant Secretary for Health Dr. Rachel Levine, shown here during her Senate confirmation hearing, was one of the officials, along with her boss, Health and Human Services Secretary Xavier Becerra, who reversed a Trump-era rule allowing health care providers to discriminate against LGBTQ people. Photo: Screengrab via CSPAN

The Biden administration on Monday reversed a Trump-era decision to allow health care providers to discriminate against LGBTQ people.

As the Bay Area Reporter previously reported, the U.S. Department of Health and Human Services decided last June to reverse an Obama-era regulation interpreting the ban on sex discrimination under Section 1557 of the Affordable Care Act to apply to cases of transgender discrimination. In addition to undoing protections for transgender people, that rule change also rolled back protections based on sex stereotyping, women who have had abortions, and those who speak English as a second language.

But as of May 10 — and just weeks after President Joe Biden declared to transgender Americans in his first address to a joint session of Congress that "your president has your back" — the old rules prohibiting discrimination against LGBTQs are back.

While the Trump-era rule ending nondiscrimination protections for LGBTQs has been reversed, changes that limited remedies available to those facing health disparities, limited access to health care for people with limited English proficiency, added religious exemptions, and reduced the number of health care entities and insurance carriers subject to the rule were not changed by HHS.

Health and Human Services Secretary Xavier Becerra said that his department made the change in light of Biden's Day One executive order (https://www.ebar.com/news/latest_news//301273) applying the United States Supreme Court's 6-3 decision in Bostock v. Clayton County last June to the federal government, so that where statutes — such as Title VII of the Civil Rights Act of 1964 — ban discrimination on the basis of sex, executive agencies interpret that to also include sexual orientation and gender identity. (As California's attorney general at the time, Becerra was one of several attorneys general who sued the Trump administration over its actions on Section 1557.)

"The Supreme Court has made clear that people have a right not to be discriminated against on the basis of sex and receive equal treatment under the law, no matter their gender identity or sexual orientation," Becerra stated. "Fear of discrimination can lead individuals to forgo care, which can have serious negative health consequences. It is the position of the Department of Health and Human Services that everyone — including LGBTQ people — should be able to access health care, free from discrimination or interference, period."

Dr. Rachel Levine, a transgender woman, is the assistant secretary of health for HHS and the first trans person to hold an office requiring U.S. Senate confirmation.

"The mission of our department is to enhance the health and well-being of all Americans, no matter their gender identity or sexual orientation. All people need access to health care services to fix a broken bone, protect their heart health, and screen for cancer risk," Levine stated. "No one should be discriminated against when seeking medical services because of who they are."

Omar Gonzalez-Pagan, a senior attorney and health care strategist for the Lambda Legal Defense and Education Fund, stated that "the law is clear."

"We applaud HHS for taking this important and necessary step, which is ever more important during the global COVID-19 pandemic," Gonzalez-Pagan stated. "However, the significant step taken today is just one step in what is a long road to undo the undermining of health care protections for all people under the Trump administration. Today's announcement does not address significant aspects of the Trump-era rule that we and others have challenged in court."

Lambda Legal filed Whitman-Walker Clinic v. HHS shortly after the Trump administration rule's promulgation last June. In September, a court ruled that the plaintiffs had standing and enjoined two parts of the Trump-era rule from going into effect: namely, the elimination of the definition of discrimination on the basis of sex and its incorporation of Title IX's religious exemption.

"We encourage Secretary Xavier Becerra and the Biden administration to take additional steps to ensure that all LGBTQ people are completely covered wherever and whenever they may encounter discrimination during some of the most delicate and precarious moments of their lives, when seeking health care," Gonzalez-Pagan continued.

"We are thrilled by the news that the Biden-Harris administration will take initial steps to reverse President Trump's dangerous, discriminatory Rollback Rule, which undermined health care nondiscrimination protections critical to the LGBTQ+ community, and trans people in particular," Zbur said. "As the world recovers from a global pandemic, it's more important than ever that every American have access to quality, affordable healthcare without fear of harassment and discrimination. We remain hopeful that under Secretary Becerra and Assistant Secretary Levine's leadership, HHS will continue to take further steps to rescind the Trump-era regulation and address the harms that it has caused."

Chase Strangio, a trans man who is deputy director for Trans Justice with the American Civil Liberties Union LGBTQ & HIV Project, stated that the rule change will be a critical bulwark considering the attacks on LGBTQ access to health care in state legislatures.

"With health care for transgender youth under attack by state legislatures, this move to protect LGBTQ people from discrimination in health care is critical," Strangio stated. "The Biden administration has affirmed what courts have said for decades: Discrimination against LGBTQ people is against the law. It also affirms what transgender people have long said: Gender-affirming care is life-saving care."

"The Trump administration's decision to greenlight anti-LGBTQ discrimination in health care in the middle of a pandemic was an act of senseless and staggering cruelty, made in blatant defiance of our values and a Supreme Court ruling made just a month prior," Pelosi stated (though the timing of the Bostock decision in her statement is incorrect; Bostock was shortly after the Trump-era rule change). "Congressional Democrats together with the Biden administration are proud to uphold the equal right of every American to access the care that they need to pursue a life of dignity and health. We must now build on this progress and enact the House-passed Equality Act to fully ban anti-LGBTQ discrimination in our nation."