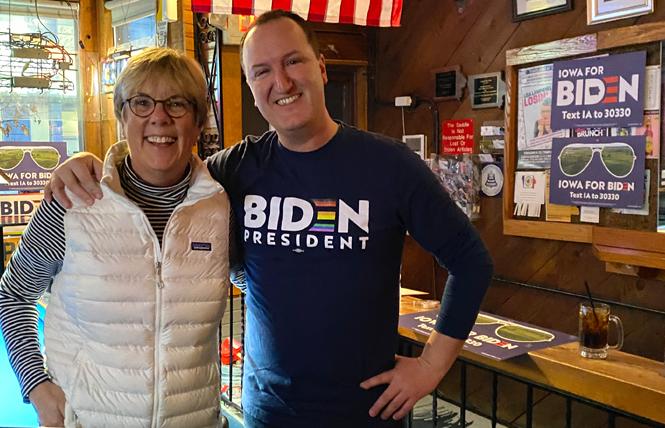 San Francisco resident Jill Nash in 2017 left her corporate job to become a communications consultant for startup companies and have more time to volunteer. It coincided with the start of President Donald Trump's administration.

Surprised that he had defeated former first lady and secretary of state Hillary Clinton, Nash embarked on a trip to talk to people in 15 states that went for Trump in 2016. Among her stops were Arkansas, Tennessee, Alabama, Georgia, and South Carolina.

"I was confused, so I decided to do a Red State tour and go talk to people who lived in Red states," Nash, 60, a married lesbian told the Bay Area Reporter. "Oftentimes in the Bay Area we are here in a little bubble."

Following her trip, Nash joined the board of GLAAD, the LGBTQ media watchdog group that has increased its focus on politics over the last five years. And as the 2020 presidential election began to ramp up, she came to a conclusion after sizing up the Democratic candidates.

"What I came away with was I was convinced Joe Biden was the only guy that could win," said Nash. "So fast forward to a year ago January with the primaries starting, I went to Iowa and worked on Biden's caucus campaign for two to three weeks. I go to the caucuses and it doesn't go that well, so I wait to see what happens in South Carolina."

Gay former South Bend, Indiana mayor Pete Buttigieg had pulled off a win in Iowa only to lose to Biden in South Carolina, due to his strong support among Black Democrats in the Southern state. With new life breathed into Biden's bid, Nash dialed up a friend of hers overseeing an effort to reach out to women on behalf of the former vice president.

"I called her up and said this whole election is going to be virtual," recalled Nash. "You knew it wasn't going to go well with Trump at the helm during the pandemic. I said let me build a digital platform."

Within a week of the website's launch they had attracted the attention of 500 women online and quickly doubled it.

"It was one of those things if you build it they will come," said Nash, who became a co-founder of the group Women for Biden and one of the 18 volunteer members of its national steering committee.

Last year, she often found herself putting in 10 hour days, six days a week helping to elect Biden as president and Kamala Harris as the country's first female vice president.

"I have always been involved to some extent with political races as a volunteer or a fundraiser. But I have never spent the kind of time I spent, nor have the other women in the group, working for Biden," said Nash. "This was a job."

And due to the COVID pandemic, the group conducted nearly all of its work virtually. In addition to bonding over their determination to elect Biden and Harris, the women consoled each other through the hospitalizations, deaths, and funerals of loved ones and also celebrated the births of children.

"It has been a remarkable experience," said Nash, who is looking forward to meeting the women she worked with in person now that they can get vaccinated for the virus. 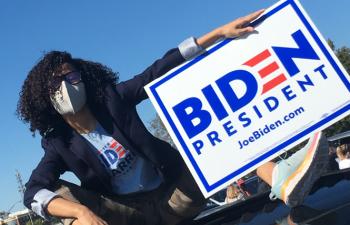 A little razzmatazz
Adding some star power to the Women for Biden group's efforts last year was Halle Morse, a lesbian and former Broadway actor who now lives in Atlanta. She relocated a year ago when a spring break visit to her girlfriend led to an indefinite move.

Having earned an MBA from Columbia last May, Morse had pivoted her career to focus on management consulting. But she didn't let her Rolodex of contacts from her time performing in and then producing shows lay fallow.

A day prior to graduating from Columbia's business school Morse saw a classmate's message looking for volunteers to assist with the Women for Biden group. Having marketing experience under her belt, Morse decided to lend a hand, at least during the summer when she had planned to take some time off.

It led her to meet Nash and subsequently launch the Broadway for Biden group to marshal the talents of her friends from the industry to help raise awareness about Biden's campaign and attract other potential volunteers and donors. With Broadway and regional theaters shuttered because of the health crisis, and touring productions on hold, Morse didn't find much resistance to her pitch for assistance, she told the B.A.R. in a recent phone interview.

"The sad thing was Broadway actors were very much out of work. Their availability was our blessing," said Morse, who said actors never tell when asked her age. "Any person we reached out to was willing to make a testimonial video for us."

With the help of co-founders Jeff Metzler and Dimitri Moise and a leadership team, the Broadway for Biden group was able to setup phone-banking opportunities on Monday nights, held seven virtual town halls and a special "pep rally," and streamed a special event last October that featured among its talented guests Glenn Close, Samuel L. Jackson, and out actor Nathan Lane. According to the group its various online efforts across myriad social media platforms generated 6 million engagements.

The group remained engaged post Biden's victory last November and helped with get-out-the-vote efforts in the two Georgia U.S. Senate runoff races, helping to secure a majority for the Democrats and ensuring Republicans' lost their control of Congress' upper chamber. For Morse personally, 2020 was the polar opposite of when Trump was elected in 2016 and she hadn't been as engaged politically.

"I was a naïve liberal and just believing in the goodwill of our people and that justice would prevail," she recalled. "I will never forget the feeling of losing that election as a New Yorker and as a liberal and as a queer woman of color."

Trump's victory led her to take part in the first Women's March in 2017. Her growing interest in politics partly prompted her decision to enroll in graduate school, which led her to volunteering on behalf of the Biden campaign.

Today, Morse has pulled back her activities to focus on her full-time job but continues to stay on top of political events. And more than 100 days into the Biden administration, Morse has nothing but praise for the candidate she worked so hard to elect to the White House.

"It's really, all I can say, just a breath of fresh air. I am able let my shoulders relax," she said. "The climate just feels different already. They are doing the work they need to do."

As for Nash, she remains involved with the renamed Women for Biden/Harris group and is helping it focus on the midterm elections next year with a goal of keeping the Senate and the House under Democratic control. It has also been engaging with its nearly 1 million members in the fight to protect voting rights at the federal level and in statehouses.

Nash told the B.A.R. she has been impressed by Biden and Harris since they were sworn in.

"I think for both of them it is an absolute breath of fresh air," she said. "They have inherited a mess. The discipline and the compassion and the competence is so refreshing and so reassuring because the previous administration it was so, it was alarming to see how they conducted themselves."

Anyone can sign up for free with Women for Biden/Harris and receive emailed alerts about its activities via its website at https://www.womenforbidenharris.com/