Editorial: Biden's got our backs 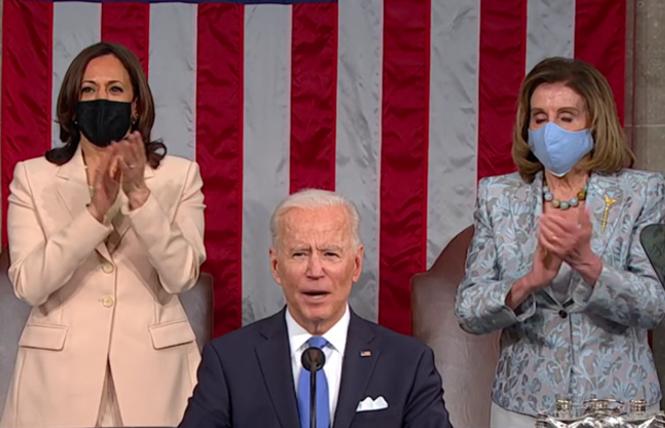 Having passed his 100th day in office, President Joe Biden has attempted to remedy four years of direct attacks by his predecessor with some important accomplishments for the LGBTQ community in pursuit of equity. He lifted the ban on transgender troops serving in the military. He nominated — and saw confirmed by the U.S. Senate — the first openly gay cabinet secretary, Pete Buttigieg at transportation, and the first openly transgender woman to serve in a senior position, Dr. Rachel Levine as assistant secretary for health. According to the LGBTQ Victory Fund, Biden has appointed at least 200 known out people to his administration, "exponentially more than any other president at this point in their administration," the organization stated in a news release. "These appointees make an incalculable impact every day, drafting policies within agencies, advising on legislation, and debating critical issues at the highest levels," stated Annise Parker, president and CEO of the Victory Fund. She added that the organization continues to work with the administration to ensure that trans and nonbinary people, queer people of color, and women are fully represented.

Even straight allies are making a huge difference. The Department of Housing and Urban Development, led by Secretary Marcia Fudge, formally withdrew a rule proposed in the Trump era that would have allowed taxpayer-funded homeless shelters to turn away transgender people on the basis of their gender identity. Last June the U.S. Supreme Court, in Bostock v. Clayton County, ruled 6-3 that a federal law — Title VII of the Civil Rights Act of 1964 — that bars discrimination on the basis of "sex," also prohibits discrimination based on sexual orientation and gender identity. HUD announced earlier this year that it would fully implement the Bostock decision in its application of the Fair Housing Act and take up cases of anti-LGBTQ discrimination in housing, which is consistent with the Supreme Court's decision and the executive order Biden signed on his first day in office that ordered federal agencies to implement the ruling across the board for all laws barring sex discrimination.

Biden's first address to a joint session of Congress last week contrasted positively in style and substance compared to recent presidents. No bombast or lies, like former President Donald Trump reliably spouted. No congressman shouting "You lie," as happened during one of former President Barack Obama's speeches (indeed, the House chamber was at reduced capacity due to the COVID-19 pandemic). Instead, the country got a glimpse of a president who tries to lead by example and who attempted to persuade Americans about how his proposals will help the country as it recovers from the economic fallout of the pandemic.

Of course, there is still work to do. The top priority is passage in the Senate of the Equality Act, and while Biden doesn't have a direct role in that, he did again come out in support of it last week. "I also hope Congress will get to my desk the Equality Act to protect LGBTQ Americans," he said. Then, referencing anti-trans legislation in many states, Biden signaled strong support for trans people: "To all transgender Americans watching at home, especially young people who are so brave: I want you to know your president has your back." That simple statement spoke loudly and profoundly to trans and nonbinary people across the country, especially after four years of being constantly targeted and scapegoated by the Trump administration. Now the work has moved to states where the former president is popular, as state lawmakers attempt to erase trans people through ridiculous policies that even they know have no rational basis. We shudder to imagine what life would be like now without a president who has our backs, and instead with one who puts a bullseye on them.