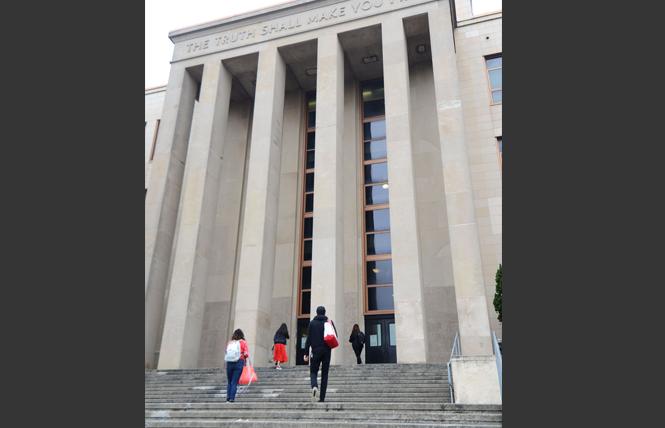 City College trustees are expected to vote on a proposed layoff plan May 10. Photo: Rick Gerharter

Members of City College of San Francisco's extended community are speaking out about proposed layoffs that would lead to cuts in classes and programming.

It is anticipated that the college's board of trustees will vote at its May 10 meeting to go forward with the plan. It already approved the sending of layoff notices to 163 faculty members and 34 administrators across 39 departments as a way of dealing with a projected deficit of $33 million.

Now, the faculty union, the American Federation of Teachers Local 2121, and members of the San Francisco Board of Supervisors are advocating the city provide emergency funding to the institution, which has struggled with budgetary problems for years.

A rally and march to oppose the budget cuts is scheduled for Saturday, May 8, at 11 a.m. at City Hall, according to Athena Waid, who does political and communications work for AFT 2121. At a May 3 virtual news conference Waid also said that the union is seeking people to sign an open letter to the trustees.

"If CCSF implements these layoffs, entire departments will be left with no full-time faculty," the letter states. "Our ability to write or update curriculum as required by accreditation standards, work with community agencies, bring in students, or do outreach needed to ensure San Francisco's Black and Brown students know about the opportunities City College provides will be severely diminished. Students will lose access to office hours and faculty support. The structure that keeps our college going as an intellectual and community resource will be undermined."

In a statement, City College stated it is in talks with AFT 2121 "negotiating the impacts of the layoffs," and there is a mutual goal of reducing the number of them. The college itself requested $15 million from the city, according to the San Francisco Examiner.

"We understand the demoralizing effect these actions might have, but we have no money and by not cutting salary expenditures, we risk being taken over by the state," stated interim Chancellor Rajen Vurdien, Ph.D. "For many years this college has not operated at full capacity. We have offered single section after single section that has not been filled to capacity. We have paid for faculty and administrators to support a non-sustainable class schedule. There is nowhere for us to make savings. In order for this institution to continue to serve the community and future generations, we must reduce salary expenditures."

For its part, the chancellor's office said that the cuts are part of a "right-sizing" of the college.

Rosalinda Zapeda, director of media, governmental relations, and marketing for the college, told the B.A.R. that "unfortunately there's a lot of misinformation going around."

"We issued notices in March. Those notices were based on seniority," she said, adding that if faculty who didn't get notices decided to leave in the past two months it will change who actually gets laid off come the vote. "Part-time faculty at a community college don't factor into actual layoffs because they don't know if they will be teaching semester by semester."

When asked if the administration takes issue with the messaging of AFT 2121, Zapeda said, "Yeah, yeah," before saying "I wouldn't even phrase it as taking issue. Basically, we're right-sizing the college without decimating it. That's incorrect. We're not decimating it. There's no programs being cut. What's being cut is this huge overhead of salary expenditures. You don't need salary expenditures if you're right-sizing."

When reached for comment about how he would vote, Tom Temprano, a gay man who is vice president of the college board, said, "It's too soon to say because we don't know yet what we are voting on."

Temprano said he hopes that the number of layoffs can be "significantly reduced" by concession bargaining between the administration and the union, which would "try to see if there are ways in the contract that exist to avoid layoffs," such as implementing furlough days.

"These are really challenging times for City College," Temprano said. "Multiple audits have pointed to a lack of fiscal stability. The enrollment is the lowest in a long, long time."

While the trustees and the supervisors have been working on a solution for some time to spare "some of the most in-demand programs, and programs essential to economic recovery," it is highly unlikely anything could be agreed upon in the next week.

City College board President Shanell Williams, a bisexual woman, told the B.A.R. that there is "misinformation" being spread about the college's plan by people affiliated with the faculty union and on social media.

"There is a narrative out there that we don't need to do this, that this isn't a very serious financial issue," Williams said. "I've been seeing out there a number of groups who think the board is not doing enough to lobby for additional resources, which is not true. We have to move to reduce our expenditures. The can has been kicked down the road for a number of years, before my time on the board."

Like Temprano, Williams is hoping for concessions in negotiations. Nonetheless, the board has to "make sure there is parity between full-time faculty and full-time equivalent students."

'Devastating impact for students'
Jesse Kolber and Pau Crego Walters teach at City College, for now. They take issue with the administration's messaging.

"It does actually affect part-time people," Crego Walters, who identifies as a trans and queer person and teaches in health education, told the B.A.R. "There's no security that I will receive an assignment every semester. But in my case, I teach a transgender health class and an HIV/hepatitis class and, if I've taught a certain number of times, I get to be offered it before others. But with these layoffs, full-time people will have first choice, so it does effectively lay me off. I'm the only out trans faculty member in my department and I teach two classes relating to trans community health."

Kolber, who identifies as a queer, trans man and teaches in behavioral sciences, told the B.A.R. "Yes, I agree with what Pau said."

"Trans and queer people are already underrepresented in this institution — particularly as professors and in teaching roles. It's unlikely students would have a trans professor, but they do have that at City College," Kolber said. "But now we are facing layoffs. When you lay off queer, trans, and nonbinary faculty you're affecting queer, trans, and nonbinary students and their ability to feel comfortable and safe. It's really impactful to students, making sure students are safe."

Crego Walters added that "by laying off trans and LGBTQ faculty, that limits mentorship opportunities for LGBTQ students."

Kolber and Crego Walters both said that the implementation of the new gender inclusion policy (https://www.ebar.com/news/news//287384) at the institution may be threatened. The college board passed the policy in January 2020; it is designed to protect transgender and gender-nonconforming students and staff who said they were mistreated.

"Jesse and I work at City College. In addition to faculty roles, we worked on passing a gender inclusion policy," Crego Walters said. "We have been continuing implementation work, as the college is not up to par with the gender inclusion policy. But if we are laid off, we will not be able to continue that, which will have a devastating impact for students."

Kolber said he "really hope[s] the trustees do the right thing and consider how this will affect the queer and trans community at CCSF."

'This school is a beacon of hope'
During the virtual news conference, AFT 2121 characterized the 65% cuts as potentially decimating to the institution.

Tamika Jones, a City College faculty member in the computer and information technology department, said that she learned the skills at City College herself that helped her to get ahead. She is the parent of a first-year student.

"City College has been a symbol of new beginnings in my life," Jones said. "My professors were supportive and that motivated me to work hard."

Though she initially didn't finish a degree at City College, Jones said what she learned helped her in a position with Pacific Gas and Electric Company.

"The technical training I received at City College of San Francisco made a huge difference in terms of the opportunities that would have otherwise not been available to me," she said.

Her department — which trains people to work in cybersecurity, web development, cloud administration and technical support — may not survive the cuts, Jones said.

"Our students come to us hungry to learn these high-demand skills in order to change their lives," Jones said. "Employers see the drive our students have and come back again and again. We are diversifying tech, but right now, that mission is under threat. I'm one of four instructors that received a pink slip in [the department]. Between us, we teach 23 classes and our absence would impact 300-500 students every semester. ... If these cuts go through, I'm honestly not sure our department would be able to survive. This school is a beacon of hope, and right now we need your support to keep that alive."

Alumnas Shaw San Liu, the executive director of the Chinese Progressive Association, and Maria Rivera, a student at UC Berkeley, talked about the toll that the cuts would take on English as a Second Language, or ESL, classes.

"I think of our members who through City College ESL and vocational training programs have been able to obtain stable employment in child development, in hospitality and in custodial work," Liu said. "Over half the ESL classes being cut is ridiculous right now for our communities."

"I found a job, but couldn't perform well because I couldn't speak the language," Rivera said. "So I looked for classes to speak English, and I found ESL at City College at the Mission campus and I started there."

Eventually, Rivera was able to take for-credit classes at the main campus on Ocean Avenue. She called her counselors "my stars" for helping her navigate her way to transferring across the Bay.

"God sent them to me," Rivera said.

Now, her parents are learning English, too, and Rivera is on track to graduate this spring from UC Berkeley with a degree in mathematics and a minor in education so that she can one day become a teacher.

"My dream has been made possible by the classes I took at City College," Rivera said. "It's my home. That's why I'm kind of sad. Immigrants — we need to be educated to give back to the city. We work in our city and we need to be able to speak the language of the city."

Alan D'Souza, an at-large representative on the AFT 2121 executive board, said that the ESL program at City College is the largest non-credit program in the state.

"We are a wealthy city, and at this point, not only can San Francisco afford it, but the rest of the nation can afford it," D'Souza said. "Especially at a time when communities of color are more affected by these cuts, we need to stand up for City [College]."

City College trustee insists he did not call police on protesters outside his home
Sign up!