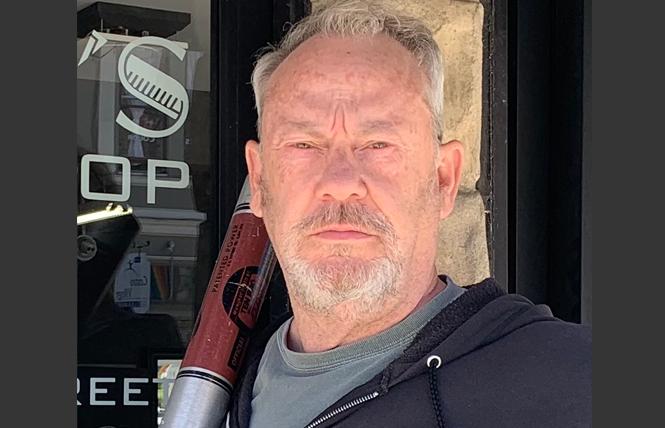 Daddy's owner Arlen Lasater holds the bat he keeps for protection as he stands outside his shop. Photo: Sari Staver

Two of the most successful were by South of Market's internationally acclaimed nightclub and cabaret Oasis (raising $268,000 in a 12-hour telethon) and the Castro's Twin Peaks Tavern (raising $110,000 through GoFundMe).

But when Arlen Lasater, the owner of Daddy's Barbershop in the Castro, launched its fundraiser the campaign fizzled, he conceded. As of May 3, 32 people have donated $3,650, barely making a dent in his ambitious $100,000 goal.

"It hasn't worked out so far," said Lasater.

Lasater, a 61-year-old gay man, was strongly opposed to asking the public for money, he told the Bay Area Reporter in a recent interview outside his 19th Street storefront. "I thought it sounded like begging," he said.

But his employees pushed the issue, he said. "Business was so slow that it was clear I had to do something if we were going to be able to stay open," he said.

So in mid-April, Lasater posted a GoFundMe to raise money for back rent while the shop was shut down due to the COVID-19 pandemic.

Now down to three barbers, Lasater said there isn't enough business to keep them busy. "I had just one customer myself today," said Lasater.

At age 46, after a successful business career, Lasater decided to go back to barber school. "I found out that I really love to cut hair," he said. "I feel lucky to have found a career I have enjoyed."

For several years, he worked at Joe's Barber Shop, now located on Market Street, but previously in the space above Daddy's. Once he had a large established clientele, Lasater thought the time was right to strike out on his own.

"We had three-hour waits for a haircut on Saturdays," said Lasater, recalling better times.

Even before COVID, business in the Castro was slipping, he said. At its busiest, five years ago, there were 17 barbers working seven days a week in the shop's nine chairs.

"By the end of the school year, all of the students, the staff, the owners, the teachers, everyone was calling me 'daddy.' And so, 'daddy' came into my head and Daddy's was born," he said.

Lasater is involved in the leather community, and has served on the board of directors of the Folsom Street Events, which produces the leather- and kink-themed Folsom Street Fair and Up Your Alley events.

A few years ago, Lasater asked himself if the boom years were over. After a handful of break-ins, Lasater started keeping a baseball bat nearby and wondered if the Castro had changed permanently.

"It's not news that the neighborhood has changed," he said, when many young tech employees moved to the city, driving prices up on rents and real estate in the neighborhood. "Gay people don't feel they have to live in the Castro any more. We can go anywhere."

The street crime and the people living in tents in the Castro didn't boost the neighborhood's reputation, he said. "If you're going to do business here, you have to take (the crime) as a given," Lasater said,

During a trip to Palm Springs a few years ago, Lasater saw that the city was booming. Lasater had seen "the writing on the wall" and decided to test the waters down there to see if a Daddy's might succeed.

So in 2018, Lasater opened a shop in Palm Springs and commuted back and forth as he watched the newer shop often booked solid.

"No comparison to what is going on" in the Castro, he said.

Although he hasn't made any formal announcements, Lasater plans to continue operating Daddy's in Palm Springs. But without money to pay the back rent, the future of the Castro location is in doubt. 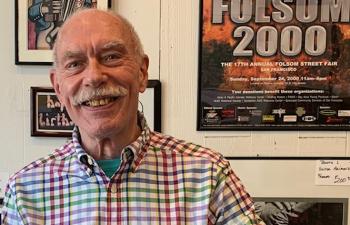 For example, the vintage LGBTQ erotica and memorabilia store Auto Erotica had a crowdfunding campaign that quickly turned into a success, said owner Patrick Batt, a 74-year-old gay man, in an interview at the upstairs shop at 4077 18th Street.

After 25 years in the Castro, Batt's business suffered from the pandemic's stay-at-home orders. "We don't have an online presence at all," he said. Tourists, who make up a large part of his business, have not been traveling in the numbers once found in San Francisco, he noted.

Like Lasater, Batt was hesitant to launch a fundraising campaign, but a persistent customer talked him into it so he posted a GoFundMe campaign.

"I'm comfortable now," he said, that the business should be able to pull through the tough times, especially as people begin traveling again.

To Batt, Auto Erotica is much more than a shopping emporium. "I consider this a living museum of LGBT history," he explained. "I am optimistic that despite the neighborhood problems, our business will continue to thrive. There is such demand, and the shop is one of the few of its kind still around."