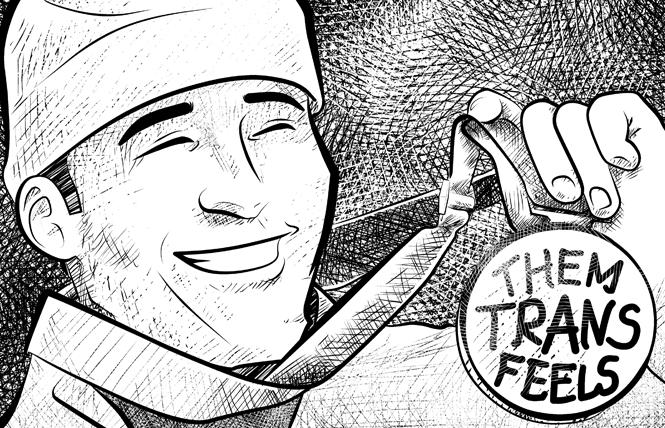 For the moment, I want to speak to those readers who may not think of themselves as transgender.

You may think of transgender people as somehow different from you, say, some group of people over yonder that maybe you know a few things about, but haven't really spent any time getting to know much about.

Maybe your view of transgender people is primarily the notion of a person assigned male at birth, who decides one day to put on a dress, some lipstick, and declare that they are now named Jennifer or some such. Or, perhaps, you hear that it's about young women who have somehow become deluded into believing that they might be men in some sort of internet craze akin to planking or the ice bucket challenge.

But no, I want you to understand, for just one moment, that these notions are not the reality of the majority of transgender people. For most, the idea of our gender identity is fixed from a young age — just like yours. The difference is that a pre-natal ultrasound or a delivery room doctor saw a certain type of genitals and decided they had the key to who you were.

That whole assumption has become a very big deal in the last 30-odd years. Today, we've seen so-called gender-reveal parties literally explode on the scene thanks to people — usually prospective fathers — deciding that using live rounds to ignite a binary explosive named Tannerite combined with pink or blue powders is a sane, rational way to let people know whether their fetus appears to have a penis or not. (Some of these have even resulted in death or massive destruction such as wildfires.

I feel as if gender reveals have become the universe's mirror version of the traditionally feminine baby shower, where the men in your life can revel in masculinity, practicing every dark ritual they feel reinforces their gender in the eyes of their buddies, hopefully culminating in a sign that they have produced another male in a shower of machismo.

Oh, wait, I was talking about being transgender, wasn't I?

As I was saying, a majority of us know from an early age that something isn't right. In the era before the internet, we might go decades never quite understanding. Today — in most places — there is enough information out there that people don't have to scour libraries and seedy adult stores to find a glimmer of information.

Even then, it may take us months or years once we have a name for this thing we feel before we may feel comfortable acknowledging it publicly. For me, I first knew this was even an option when I was still a young kid, but it would be a decade or more before I felt I could speak those words and start to move forward.

Sadly, that was after I had my own binary explosion and went through the tanner stages of development at puberty. That was a hell I do not recommend. Even though I had known I was supposedly a boy up to that point, suddenly I was expected to be a man. Even my body was betraying me, as everything developed in ways I never desired or hoped for.

For you, well, perhaps you do know exactly what your gender is. For sake of argument, let's assume it matches the one you were assigned as a fetus or newly-born infant. Setting aside those awkward moments of puberty, where you had to protect your chest from hitting anything, or when your voice cracked at the most inopportune moments, I suspect you felt a moment where everything was starting to finally "come together" and everything somehow felt right, gender-wise.

If that is the case, why do you push so hard to reinforce our gender roles? Take a moment and think of the clothing you wear, the car you may drive, or even your choices of food, drink, and recreation, and see how so many of them are designed to inform and reinforce gender. How odd does that feel to realize that, even if you do feel happy to be within a specific gender, you are still being forced to conform to two increasingly rigid boxes?

Congratulations, for a brief moment you may have discovered exactly what being transgender feels like. You may never have realized just how much of your life is spent reinforcing and defending your own gender.

Think back, again, to your youth, and how you may have been pushed into being more feminine or more masculine by your family, other adults, and your peer group. Consider, too, that this has never actually stopped — even though you are presumably comfortable with your gender, you have just learned that you need to act in a given way to be accepted within it.

For those of us who are trans, we likely never felt comfortable in those roles. They never were us. It's not that we decided one day to change our gender — we always were our gender. The world and, indeed, our own bodies, sent the wrong messages to us, forcing us to conform in a way that was never going to be right for us.

Maybe, now, you can see what that feels like and get an idea of what it means to be transgender. It's not something developed on a whim, but our identities are as firmly ingrained as yours — and, in this society, something we have to fight even more to be accepted within.

Gwen Smith has so far managed to escape having a gender reveal party. You can find her at www.gwensmith.com

Transmissions: The plight of the plastic potato
Sign up!