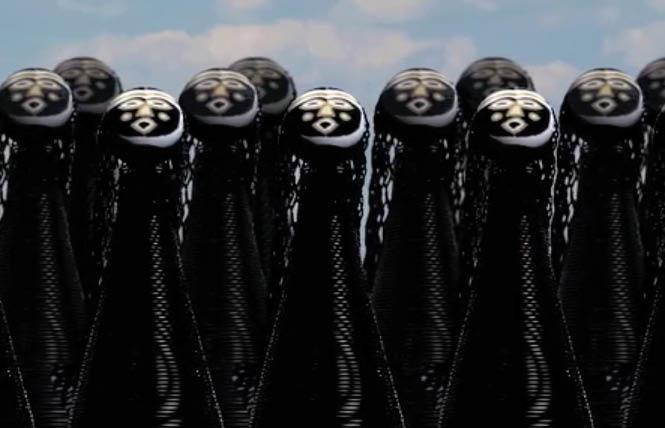 A view of some of sculptor Dana King's 350, four-foot figures representing Black ancestors that artists are proposing be placed around the plinth that formerly held the statue of Francis Scott Key, which was removed by activists last year. Photo: Courtesy Illuminate

As part of the celebrations commemorating the 150th anniversary of San Francisco's Golden Gate Park in 2020, a local artist group had proposed installing a lighted tribute to the late gay supervisor Harvey Milk along the top center of the Music Concourse Bandshell. It was to be in addition to the planned renovations of the performing space's lighting and sound equipment.

Also known as the Spreckles Temple of Music, the bandshell structure is at the western edge of the Music Concourse, which sits above the underground parking garage that serves visitors to the California Academy of Sciences, the de Young Museum, and Japanese Tea Garden. It was built in 1900, survived the 1906 earthquake, has been renovated over the years, and is the official home to the Golden Gate Park Band, which normally performs on Sundays in the park during the summer months.

Leading the renovation project was Illuminate, the arts nonprofit that last year helped to light up the Pink Triangle placed atop the city's Twin Peaks park throughout Pride Month during June. The LGBTQ symbol is installed most years just during Pride weekend at the end of the month, but it went up early and remained throughout June due to the COVID pandemic leading to the cancellation of the official Pride parade. Illuminate is again working with Pink Triangle co-founder Patrick Carney to do a monthlong lighted installation this June.

Last spring Illuminate had also wanted to install a temporary light piece with the words "Hope will never be silent" on the facade of the bandshell. It had unveiled such a neon art piece in November 2017 on the mantel of the commercial building overlooking the plaza that bears Milk's name above the Castro Muni station.

It was part of the ceremonies that fall commemorating the 40th anniversary of Milk's historic 1977 election as the first out gay supervisor in San Francisco and the first openly LGBT elected official in California. While the quote is widely attributed to the late gay Supervisor Harvey Milk, who was killed in 1978, it is unclear when he said it.

To the consternation of Ben Davis, Illuminate's founder and chief visionary officer, the city's Historic Preservation Commission refused to approve the Milk art piece for the bandshell structure. One of the leading critics of it happened to be then-commissioner Jonathan Pearlman, a gay man and local architect who called it "really inappropriate" and "very jarring." (Mayor London Breed opted this year not to reappoint Pearlman to another term on the oversight body.)

Davis had told the Bay Area Reporter last February following the Historic Preservation Commission's vote that he would reach out to the oversight body members and try to get them to reconsider. Then the COVID pandemic hit, upending the city's plans to celebrate Golden Gate Park's birthday.

While the audio upgrades and lighting enhancements for the bandshell were completed, Davis ended up shelving his Milk art installation idea and came up with an entirely different proposal for the historic structure inspired by the Black Lives Matter protests that erupted across the country last summer. It brought renewed attention to the country's racist past and treatment of various ethnic groups.

One area of focus was public monuments erected in cities that heralded figures who supported slavery. It led a group of protesters to take down a statue of Francis Scott Key from a plinth that had been part of a larger monument placed in Golden Gate Park at the other end of the Music Concourse from the bandshell.

While Key's 1814 poem "The Star Spangled Banner" became the national anthem, he was a slave-owning lawyer who fought against abolition. Following the desecration of the Francis Scott Key Monument, a city landmark, last June, it is now part of a citywide review that is looking at all of San Francisco's publicly owned monuments and whether certain ones should be removed.

In the interim, Illuminate has partnered with the Museum of the African Diaspora to erect an installation called "Monumental Reckoning" this June in the Music Concourse that would remain through June 30, 2023. Former local CBS News anchor and sculptor Dana King would place 350, four-foot figures representing Black ancestors around the plinth.

Atop the bandshell Illuminate would install a neon sign of the words "Lift Every Voice," taken from the poem "Lift Every Voice and Sing" by James Weldon Johnson. Also known as "The Black National Anthem," with legislation in Congress to officially make it the national hymn, it was set to music in 1899 by Johnson's brother John Rosamond Johnson.

As it happens, this June 17 marks James Weldon Johnson's 150th birthday. And according to the NAACP, which Johnson was an early leader of, the song was first performed in public in the Johnsons' hometown of Jacksonville, Florida as part of a celebration of Lincoln's birthday on February 12, 1900 — the same year that the Spreckles Temple of Music opened to the public.

"With all of my heart I wanted to see it happen, the Milk quote. But a part of me is grateful it didn't get approved. Now what we are doing is right for right now with 'Lift Every Voice.' It is inclusive of Milk's message but really resonates with the times," Davis told the B.A.R.

The project still needs sign off from both the Recreation and Park Commission, and the Historic Preservation Commission, said Davis, with the final votes not expected until early June. The city's arts commission gave its approval to the installation at its May 3 meeting.

"It is such a powerful punctuation for this time period," said Debra Walker, a lesbian and artist who serves on the oversight body. "It is an acknowledgement so beautifully done and so simply done and so powerful. I can't wait to see it."

Davis told the B.A.R. he is hopeful the project will get the needed sign offs and be publicly debuted June 19, a day after the official Juneteenth celebrations being held. Having read Isabel Wilkerson's 2020 book "Caste: The Origins of Our Discontents" that draws parallels between American slavery and the concentration camps of Nazi Germany, he sees Illuminates two projects it is working to unveil this June as in conversation with one another.

The Pink Triangle and "Monumental Reckoning," said Davis, "are both part of a new narrative of American history."

To learn more about the "Monumental Reckoning" installation, watch this short video about the project.

UPDATED 5/5/2021 to remove mention of See Black Womxn, as the agenda for the arts commission incorrectly listed the artist group as involved in the "Monumental Reckoning" project.

News Briefs: Pink triangle will be lighted for Pride Month
Sign up!