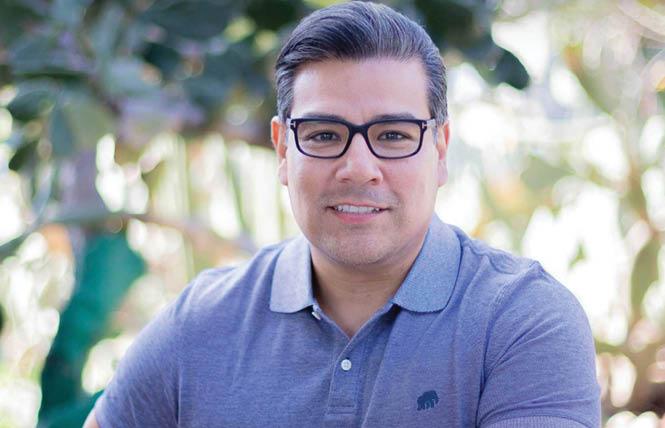 California Insurance Commissioner Ricardo Lara, the first LGBTQ person to win election to statewide office in the Golden State, officially declared Friday his intention to seek a second four-year term in 2022. The gay former state lawmaker from Los Angeles has faced a bumpy first term with self-imposed gaffes and continues to be a lightning rod for criticism from various groups.

But he also has seemed to grow into his role since being sworn into office in January 2019, when he was hailed as "our own Latino Harvey Milk" by former state lawmaker Art Torres, who came out of the closet in 2009 after leading the California Democratic Party as its longtime chair. Torres, who lost his own bid to become state insurance commissioner in 1994, was referring to the late gay San Francisco supervisor who was the first out person elected to public office in California in 1977.

At least two statewide races in 2022 will feature out candidates, as lesbian Sacramento County District Attorney Anne Marie Schubert announced Monday she is running against Attorney General Rob Bonta, who was sworn in as the state's top prosecutor April 23. While Bonta is a former Democratic state Assembly member from Oakland, Schubert is an independent having left the Republican Party in 2018.

Lara, so far, is the only person to file an intent to run for the insurance commissioner post next year, according to the secretary of state's online database. While it is unlikely he will face a challenge from a prominent fellow Democrat, Lara is likely to see a Republican jump into the race with backing from various business groups and other critics of his.

"I'm seeking reelection because this fight is far from over," Lara wrote in an April 30 email to supporters. "I'm on your side as we continue to implement solutions to the climate crisis, expand health care to every Californian, and address the inequities we see across our state."

Lara was front and center during last year's devastating wildfire season, issuing a one-year moratorium on insurers leaving fire-prone areas last November. According to his office the directive helped at least 2.1 million policyholders, or 18% of California's residential insurance market.

And last year he worked with state Senator Lena Gonzalez (D-Long Beach) to adopt Senate Bill 1255, ending the practice of insurance companies discriminating against individuals because of their HIV status. This year he is working with gay state Senator John Laird (D- Santa Cruz) to pass SB 272, which will update "archaic gender-specific pronouns" used in various state codes, such as those related to insurance.

And he is also working with Assemblyman Miguel Santiago (D-Los Angeles) to see that California becomes the first state in the country to allow adult children to add their parents as dependents to their health insurance plans. Opposed by some business groups, Assembly Bill 570, dubbed the Parent Healthcare Act, is seen as a way for low-income people living in the country illegally who aren't eligible for government-funded coverage to obtain insurance.

"My parents came to this country from Mexico propelled by a dream without documents, determined to create a better life. Now, as your insurance commissioner, I'm determined to keep fighting to make a better life for nearly 40 million Californians," wrote Lara in his campaign launch email.

Already a subject of negative ads
The headlines Lara has generated of late over insurance policy matters is a decided charge from his first months into his tenure. Two years ago the San Diego Union-Tribune raised questions about Lara's meeting with a major insurance executive with business before his department, a possible violation of state law, and intervening in cases affecting a donor.

According to filings with the secretary of state, Lara raised just $36,200 in 2020 toward his campaign coffers, ending the year with close to $21,000 in cash on hand. He has yet to file a comprehensive fundraising report for 2021 but has already raised $125,000 from various interests and political action committees, such as the LGBTQ Latino focused HONOR PAC and the LGBT Caucus Leadership Fund.

He is already the subject of negative ads. The American Property Casualty Insurance Association, for instance, has been placing ads critical of Lara in the weekday emails sent out by the Politico California Playbook. It accuses Lara of "pushing costly proposals that put group car insurance discounts in jeopardy."

Lara counters that he has saved consumers more than $1.75 billion dollars in his first two years in office and has put their interests first over those of insurance companies.

"I've fought to defend fire survivors when the industry tried to flee from their commitments - protecting more than 2 million policyholders from nonrenewal following disaster. And I've continued to strengthen our clinics and public health system, fighting to lower costs for all — while still pushing for the creation of a single-payer health care system that covers every Californian," Lara wrote in his campaign announcement email. "I'm committed to holding the insurance industry accountable to consumers because amid crisis, this work has never been more important."

To learn more about Lara's reelection bid, visit his campaign site at https://ricardolara.com/