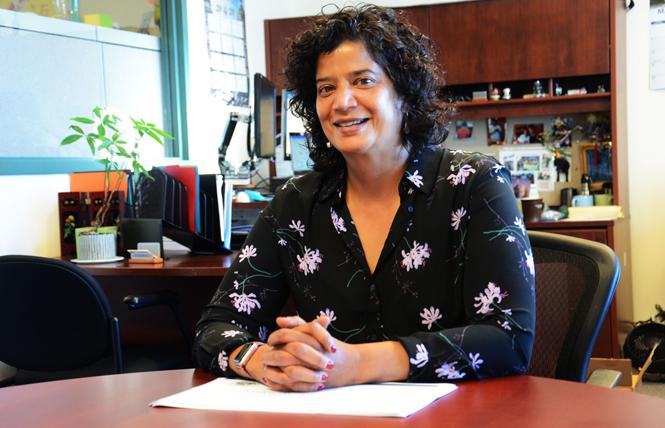 As she departs May 1 for the unenviable job of overseeing San Francisco's response to homelessness, Shireen McSpadden is leaving behind a nationally recognized legacy of tackling LGBTQ aging issues as the executive director of the city's Department of Disability and Aging Services.

McSpadden, 57, who is bisexual and grew up in San Francisco, for the past five years oversaw an agency responsible for more than 70,000 seniors, adults with disabilities, caregivers, and veterans. Under her leadership DAS, as the department is known, worked to ensure that a groundbreaking report on LGBTQ aging issues was implemented and not shelved away to collect dust, as was the case with a similar report released in 2003.

"She had, I think, from the very beginning of that project a deep sense of investment in LGBT senior issues, both personally and professionally," said Bill Ambrunn, a gay man who chaired the task force that wrote the report and has now launched the LGBT Better Aging Project for California. "She was just 100% on board from the very beginning and really just did absolutely everything she could do to follow through. She has been a very gifted and adept leader on aging issues and, in particular, for our community on LGBT aging issues."

Since the issuance of the 2014 report, "LGBT Aging at the Golden Gate: San Francisco Policy Issues and Recommendations," progress has been made on addressing nearly all 13 areas of concern it had highlighted and implementing practically all 40 of the specific steps the report suggested be taken to benefit the city's LGBTQ senior population, estimated at roughly 22,220 residents age 60 or older as of 2020.

As for the couple of suggestions from the report left to be tackled, those are outside of the purview of DAS but several, coincidentally, fall under the focus of the Department of Homelessness and Supportive Housing, which Mayor London Breed tapped McSpadden to now oversee. One involved ensuring the city's shelters are welcoming to LGBTQ people, while the other called for making sure the city's stock of single-room-occupancy hotel housing is safe for LGBTQ seniors to move into.

In an interview with the Bay Area Reporter this month, McSpadden pledged to work on those issues once she has settled into her new job.

"It is one thing I will definitely pay attention to when I move over to the new department," she said. "But there are so many things that need attention before that. Once I get in there, I plan to figure out with staff, community partners and all stakeholders what is happening and what the priority should be."

The programs DAS has launched focused on transgender seniors have been the first of their kind in the country. Another policy from the report that was put into place by San Francisco then statewide was an LGBTQ seniors' bill of rights. It protects those residents of assisted living facilities from being discriminated against and provides a mechanism for reporting violators to DAS.

Yet few complaints have been received, said McSpadden, whose department has worked with the local facilities to train them on LGBTQ cultural competency and the needs of their residents.

"We have heard more anecdotally from people who work at those facilities that they really welcome it to have and share with families, caregivers and individuals themselves," she said. "Often LGBTQ seniors don't even know these are their rights and don't consider they have rights as LGBTQ people, so it is helpful to share the information with them."

SOGI data
One key area McSpadden, who has worked in various roles at DAS for 18 years, took a leadership role in was the collection of sexual orientation and gender identity data. The department has helped train other local aging agencies on how to gather the SOGI information and to use it to address gaps in service among LGBTQ older adults.

For San Francisco, the SOGI data has revealed that although LGBTQ seniors are comfortable accessing programs specifically targeted for them, they are less likely to seek out services developed for a general older adult population. And the information collected helped DAS pivot early in the COVID pandemic to help LGBTQ seniors with food assistance to ensure their pantries didn't go bare due to their having to sequester at home.

"What I learned from this is we were fortunate we had the 'LGBTQ Aging at the Golden Gate' policy recommendations to use as fodder for us," said McSpadden.

Other issues among LGBTQ seniors the SOGI data had already showcased that were exacerbated by COVID included social isolation and suicidal ideation in older people and people with disabilities. DAS early on in the pandemic worked to address those needs with its community partners, such as LGBTQ senior services agency Openhouse and Shanti, which provides support to older and vulnerable adults through programs like its Pets Are Wonderful Support.

"Due to the fear of COVID and the fear of coming out, there was just an incredible loneliness," noted McSpadden, who like many DAS employees was redirected to work on the city's COVID response in addition to continuing to focus on their regular duties. "We started off early figuring out how to mobilize resources, such as volunteer resources, for getting help to people in their homes."

McSpadden praised her staff for being able to quickly mobilize at the start of the pandemic to address the needs of the department's clients. Many continued to venture out into the field despite the health risks to ensure people's needs were met.

"They are committed to the people they serve even though it is hard to go out when you are unsure if you will get ill or if the PPE is protecting you and if your clients are protected," she said. "We are serving some of the most vulnerable. I think we learned lasting lessons on how to break down silos between city departments."

Having worked on the efforts to gather SOGI data, McSpadden said she wasn't surprised to see the problems in collecting LGBTQ demographic info that the COVID pandemic brought to light. As the B.A.R. has reported, various issues have impeded local and state health officials from knowing exactly how widespread COVID infections have been within the LGBTQ community or how many LGBTQ individuals have gotten vaccinated.

McSpadden noted that she and her DAS colleagues continue to encounter pushback from some individuals who question why SOGI data is needed.

"We have a tough road ahead of us, even in 2021, to explain why this is important. I still have family members who say why should a person share such personal information," she said. "We in queer communities in San Francisco have moved so far beyond that and so have our allies, but a lot of people haven't. It has been a battle to get to the point where we normalize SOGI data like we have normalized a lot of other demographic information."

The work that DAS and its nonprofit partners have done on SOGI data is one of her prouder achievements, said McSpadden. One of the projects it has overseen is conducting an LGBTQ COVID-19 survey whose results should be ready for release in the coming weeks.

"The staff here and our community providers have taken a lead on this. It is one of the programs we stepped out in front of and have been bold about it," said McSpadden. "There are still a number of other entities across the counties and at the state level that need to jump on that bandwagon and move this work forward."

McSpadden, who has been serving as president of the California Association of Area Agencies on Aging, told the B.A.R. that she will forever be proud of the leadership role she and her staff, along with community partners, have taken to address LGBTQ aging issues.

"It is certainly something I am proud of and something I will keep in my heart as I go from here into my new position," she said.

Tom Nolan, 76, a gay man who is manager of special projects at DAS and staffed the LGBT Aging Policy Task Force, called McSpadden "a fabulous leader" and an "inspired choice" to now be the city's de facto homelessness czar.

"The mayor chose wisely and well," said Nolan, who plans to remain working at the aging department.

Praising McSpadden's ability to listen and then act on community concerns presented to her, Ambrunn told the B.A.R. he is confident she will continue to be adept in her new role and is excited to she what proposals and programs she implements to address homelessness and housing insecurity among both LGBTQ seniors and youth.

"It is pretty well documented at this point the LGBTQ community is over represented in the homeless community and that includes, in particular, transgender people who are aging and are part of that homeless community. I know Shireen will always keep them in mind and do whatever she can to make their lives better," he said.