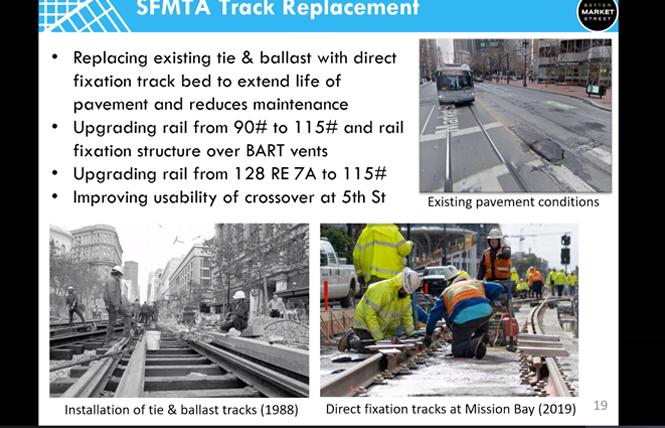 A slide shows old Muni tracks over the years, and what will be done during phase 1 of Better Market Street between Fifth and Eighth streets. Photo: Courtesy SFMTA

The public deserves real answers from several city agencies and BART about the proposed phase 1 Better Market Street project, which would tear up Market Street, between Fifth and Eighth streets, for as long as two to four years to replace water, sewer, and rail lines. This would suspend service for the popular F Line historic streetcars, which will negatively impact Castro-area businesses already struggling to bounce back from the COVID-19 pandemic. As we reported last week, streetcar service would be replaced with buses, a less attractive experience that won't entice tourists with rides from Fisherman's Wharf to the Castro.

On April 26, the Community Advisory Committee for Better Market Street held a virtual meeting — it has been discussing the project for years — and heard updated reports from San Francisco Public Works, the San Francisco Municipal Transportation Agency, and the San Francisco Public Utilities Commission. Estimated to cost $80 million, the phase 1 project already has funding lined up, including state and federal grants and city bond money.

But after the presentation, committee members focused on how to shorten the construction timeline. Committee member Peter Straus pointed out that phase 1 involves only a small section of Market Street. What about the rest of the major artery, he asked, and speculated that the F Line could be out of service for a decade or longer as other parts of the street get their makeovers. Cristina Olea from public works pointed out that phase 1 is "meant to be exploratory" and that funding has not been secured for other segments of Market Street. "We don't know enough about the rest of the corridor," she said. "I'm asking you to take a leap of faith on phase 1."

The discussion turned to accelerating the project after Olea mentioned that the construction crews had worked on the Third Street Bridge renovation 24/7 so that it would be ready for the opening of the Golden State Warriors' Chase Center. But when she said that a similar effort might not be sustainable for Market Street, committee member Rick Laubscher, president and CEO of the nonprofit Market Street Railway, had had enough. Referencing the wealthy owners of the basketball team and how work was speeded up for them, Laubscher questioned the city's commitment to small businesses that would be severely impacted by the loss of the F Line, including those in the Castro and Mid-Market. "The surface work is desirable. It's the underneath stuff that's a real problem. I'm not hearing enough of a commitment to the schedule," he said, and explained that the environmental impact report that had already been approved stated a one-and-a-half to two-year disruption. "Now it's three years and could vary between two and four," he said. "Merchants and bicyclists will be inconvenienced. You ask us to take a leap of faith ... but I am worried about it."

Committee member Jim Haas, a gay man, has had a literal bird's eye view in front of his apartment of another public works project that is updating Van Ness Avenue with dedicated bus lanes to improve traffic flow. The Van Ness Bus Rapid Transit project, which broke ground in 2017, was planned to be completed in 2019. Still ongoing, the estimated completion date is 2022. "I've never felt the contractors had any sense of urgency," he said of that project. "Build some urgency into this. Work 10 hours a day instead of eight; speed it up a little."

Olea said project officials are considering including incentives in the contract to reward quicker progress, but the final draft would have to be reviewed by the city attorney's office. "We would like to work in urgency," she said.

No one from BART spoke during the meeting, but its portion of the project is limited compared to the other city agencies. Gay BART Director Bevan Dufty told us last week that the transit agency needs to install canopies above entrances to comply with state law. At Monday's meeting it was pointed out that BART needs to install new grates.

Small businesses, residents and riders who will be adversely affected by the loss of the F Line during this project deserve answers and a real plan, not asked to take it all on faith. As one speaker pointed out, people don't care about what pipes are beneath the street. They do care about delays and inconvenience, which seem inevitable on big infrastructure projects like Better Market Street even if incentives are part of the contract. The community advisory committee plans to meet again May 17. The San Francisco Transportation Authority, which comprises 11 members of the Board of Supervisors, will hear about the project May 25. City agencies should be upfront with all stakeholders about delays and develop some concrete solutions to lessen the consequences.