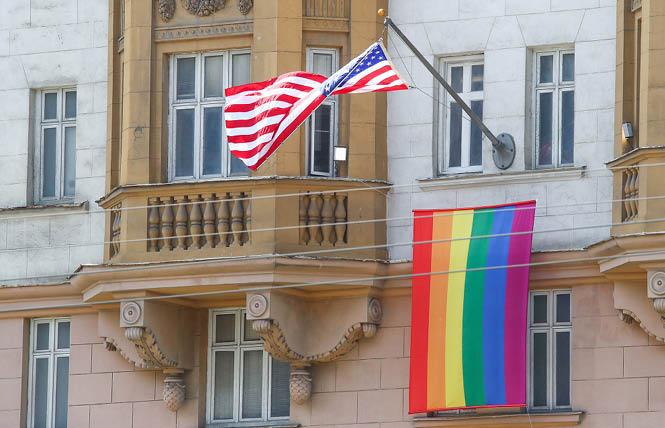 The U.S. flag and an LGBTQ pride flag flew on the front facade of the U.S. Embassy in Moscow last June. Photo: Courtesy Tass

In another reversal of the previous administration, U.S. embassies received a cable from Secretary of State Antony Blinken last week containing a "blanket authorization" to raise the Pride flag this year. The announcement came ahead of International Day Against Homophobia, Transphobia, and Biphobia in May and Pride Month in June.

The cable authorized U.S. missions to display the Pride flag if they choose to do so "on the external-facing flagpole, for the duration of the 2021 Pride season." The cable was sent out early to include IDAHOT, observed May 17.

The cable encouraged missions to develop policy and events for both IDAHOT and Pride Month. "This is an authorization, not a requirement," the cable stated.

Former President Donald Trump's administration banned flying the Pride flag at embassies. South Korea's U.S. embassy in Seoul defied the Trump administration by flying both the rainbow flag and the Black Lives Matter flag, as did some other embassies.

The cable also mentioned reinstating the special envoy for the human rights of LGBTI persons, prioritization of resettling LGBTQ asylum seekers and refugees fleeing persecution, among other key initiatives for LGBTQ rights.

The cable stated it would not advocate for marriage equality abroad as a part of the U.S.'s LGBTQ foreign policy due to concerns of causing harm to some local queer communities, reported ABC News.

ABC News and the New York Times, which both saw a copy of the cable, covered the development April 23. It was first reported by Foreign Policy.

The nonbinding motion, proposed by Ulster Unionist Assembly members Doug Beattie and John Stewart, argued it is "fundamentally wrong" to view the LGBTQ community as needing a "fix or cure."

An amendment to protect churches brought forth by Democratic Union Party members Robin Newton and Pam Cameron was voted down 59-28 the same day.

The United Nations, along with medical associations in the United States, U.K., and elsewhere, has debunked conversion therapy and called for the practice to be banned. Some governments, such as Germany, have heeded the call, prohibiting the practice in 2020.

On April 13, Liz Truss, minister for women and equalities, disbanded the panel that was set up by former Prime Minister Theresa May to advise ministers on LGBTQ issues and policies as a part of the U.K.'s LGBT Action Plan. The panel was set to expire March 31, but some members expected for it to be renewed to continue working with the government on behalf of the LGBTQ community.

In the letter sent to the panel members, seen only by the BBC, Truss wrote, "I am pressing ahead with our commitment to ban conversion therapy in order to protect LGBT people from these abhorrent practices. I look forward to announcing these measures shortly."

Northern Ireland's Minister for Children Roderic O'Gorman recently asked officials in the Department of Children, Equality, Disability, Integration and Youth to prepare a scoping paper to ban the practice, reported the Irish Central. Earlier this month, he set up a new cross-party all-Ireland coalition to ban conversion therapy.

The coalition's effort is Ireland's second attempt to ban conversion therapy. Sinn Fein Senator Fintan Warfield's 2018 bill was co-signed by 20 senators but only reached the committee stage in Ireland's senate, reported the newspaper.

Following the vote, Hargey, who voted in favor of banning conversion therapy, said the practice "has no place in society," and was committed to bringing the legislation forward in an April 20 statement issued by the Department for Communities.

She did not state when the legislation would be introduced in the Senate, but Pink News reported officials were currently researching how to implement the ban on conversion therapy.