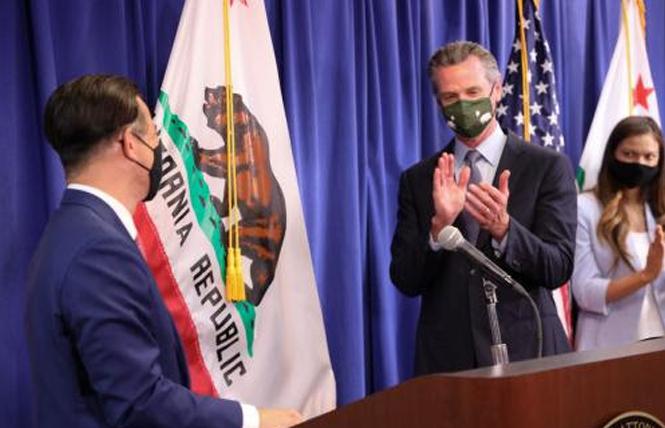 Governor Gavin Newsom swore in Rob Bonta as California's 34th attorney general April 23. A national leader in the fight to reform the justice system, Bonta, a former East Bay assemblyman, is the first Filipino American in the state's history to serve in the role.

But Bonta, an ally to the LGBTQ community, will have a race on his hands to keep the position. Already candidates have announced they will run against him, including Anne Marie Schubert, a lesbian who is the Sacramento County district attorney and a registered independent. Moderate Republican Nathan Hochman, former assistant attorney general in the Bush administration and the former president of the Los Angeles Ethics Commission, has also announced he is in the race.

Bonta must run in 2022 for a full term but could end up having to run to fill out his predecessor Xavier Becerra's term on the same ballot as the recall against Newsom, which is expected to be held before year's end. (State officials said Monday that Newsom opponents had gathered enough valid signatures to force a recall.)

"California and the nation need leaders like Rob Bonta to meet this pivotal moment in our history with the courage, energy and tenacity it will take to shape a society more reflective of our values," Newsom stated. "Carrying the lessons of his remarkable upbringing at the center of historic social justice movements, Rob has been at the forefront of courageous fights for racial, economic and environmental justice from day one. As attorney general, Rob brings to bear the legal and moral authority to effectively engage a broad array of groups — community leaders, law enforcement, the Legislature and more — in a meaningful dialogue, so that California continues to build bridges and advance together in a direction that does justice to all our communities."

Confirmed by the Legislature April 22, Bonta was selected by Newsom to fill the position vacated by Becerra, who was recently sworn in as secretary of the U.S. Department of Health and Human Services. The governor announced the nomination in March at the historic International Hotel in San Francisco, a site where Asian and Pacific Islander Californians famously rallied in 1977 to save the homes of elderly residents and preserve their community.

"Thank you, Governor Newsom for the faith and trust you have placed in me. Serving as California's attorney general is the honor of a lifetime," Bonta stated. "There are a lot of challenges we face across America today. People see institutions that work well for those with wealth and power — at the expense of everyone else."

With Bonta officially in office, Newsom announced Monday that there will be a special election August 31, with a June 29 primary, to fill his East Bay Assembly seat, which includes Oakland, Alameda, and San Leandro. Already three LGBTQ candidates have stated they will run: James Aguilar, a member of the San Leandro school board; social justice attorney Janani Ramachandran; and San Leandro City Councilman Victor Aguilar Jr. (no relation to James). Bonta's wife, Mia Bonta, president of the Alameda school board, is also running for the seat, as is Malia Vella, the vice mayor of Alameda.

NCLR to recognize B.A.R. at virtual gala
The Bay Area Reporter will be recognized by the National Center for Lesbian Rights for its 50 years of covering the LGBTQ community at the nonprofit's Champions for Justice virtual gala Saturday, May 8, at 6 p.m. Pacific Time.

Another queer media outlet, the Windy City Times in Chicago, will also be honored, along with people who have made a difference in fighting for the LGBTQ community. They include Dee Deirdre Farmer, an advocate for incarcerated people; poet Andrea Gibson; gay Pennsylvania state Representative Malcolm Kenyatta; former pro football player Chris Kluwe of Athlete Ally; trans Delaware state Senator Sarah McBride; and actor Ryan O'Connell.

Co-hosts for the evening will be Michelle Meow and Michael Tate.

Registration for the event is free, though donations are accepted. NCLR has a goal of raising $400,000, and as of press time had brought in nearly $270,000.

Last year, eight scholars were selected from six states and each received $5,000 in financial scholarships. Their studies and work range from mitigating the impact of HIV/AIDS in communities of color and other marginalized communities and supporting mentor programs to reduce homelessness to helping people navigate the criminal justice system and providing counsel to help people living with HIV through the challenges of COVID-19, according to a news release.

The scholarship is named in the honor of the late AIDS educator, activist, and reality television pioneer who died more than 20 years ago from AIDS-related illness.

Applications for the Fall 2021/Spring 2022 academic year are now being accepted. The deadline is July 15. For more information, click here.

Coast Pride celebrates birthday
Coast Pride in Half Moon Bay will celebrate its birthday next week, but unlike last year's pandemic-induced virtual event, organizers are asking people to mask up and visit its new center for a quick tour and a cupcake.

The event takes place Thursday, May 6, from noon to 5 p.m. at the office, 711 Main Street in Half Moon Bay.

Officials are also asking people to support this year's Coastside Gives, an online fundraiser for coastside nonprofits. Coast Pride, with $11,000 in challenge grants, encourages people to donate between now and May 6 so that their donation can be doubled. For more information, click here.

Finally, to kick off Pride Month in June, Coast Pride will have a car parade Monday, June 7, from noon to 1 p.m. Businesses are expected to display rainbow flags, and people can drive by and honk their support.

For more information about Coast Pride, go to https://coastpride.org/