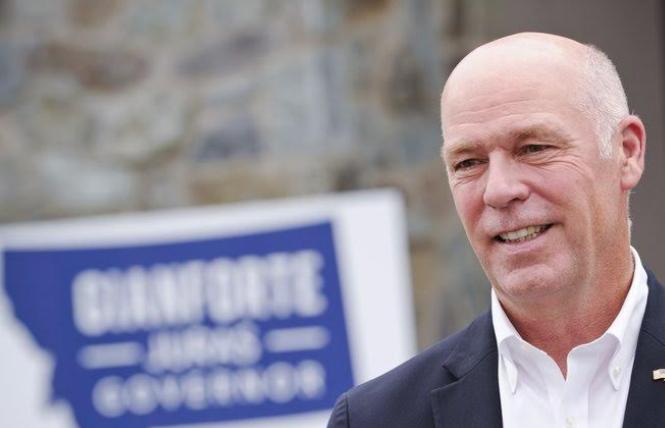 Due to the passage of a law that LGBTQ advocates contend grants Montana residents a license to discriminate based on a person's sexual orientation or gender identity, the Mountain West state is likely to be added to the travel ban lists kept by California and San Francisco officials.

Montana Governor Greg Gianforte signed Senate Bill 215 into law April 22. National LGBTQ rights advocacy organization the Human Rights Campaign blasted his doing so over the weekend, contending the legislation is an expansive religious refusal bill that could grant a license to discriminate against Montanans and visitors, including LGBTQ people, people of faith, and women, across a wide range of goods and services in the state.

"SB 215 will have a significant impact on vulnerable communities in Montana — including people of faith, women, and LGBTQ people. It will also jeopardize Montana businesses that voted for Governor Gianforte with the hopes of getting the state's economy back on track," stated HRC President Alphonso David. "Let me be clear: religious liberty and equality are not mutually exclusive, and Montanans will not stand by as Governor Gianforte and fearful legislators seek to actively discriminate against the LGBTQ population."

As the Helena Independent Record noted, Montana is now the 22nd state that has adopted what is known as a Religious Freedom Restoration Act or RFRA bill. Gianforte's office refuted it is meant as a license to discriminate against LGBTQ people.

"The governor signed SB 215 into law to protect the freedom of people of all faiths to exercise their sincerely held religious beliefs," an unnamed spokesperson for the governor's office told the paper. "Montana joins 21 other states with RFRA laws, where it has historically been used to allow Native American children to wear braids in school, Sikhs to wear turbans in the military, and Christian employers to refuse to cover abortions under their health insurance policies."

Once enacted, the Montana law will be reviewed by both the offices of California Attorney General Rob Bonta and San Francisco City Administrator Carmen Chu to see if it requires placing the Big Sky Country state onto the "no-fly lists" kept by each office.

San Francisco not only bans taxpayer-funded travel for non-essential trips to states that have adopted anti-LGBTQ laws since 2015 but also outlaws city departments from contracting with businesses located in those states. The city also now bans its employees from using taxpayer dollars to travel to states that restrict access to abortion services.

There are currently 24 states on San Francisco's list, thus Montana would become the 25th state to be added to it. There are only 12 states at the moment on California's list.

Because the two states have restrictive abortion policies in place, North Dakota and Arkansas have been on San Francisco's banned travel list since January 1, 2020. They should now receive a double asterisk marking to note each state has enacted both anti-abortion and anti-LGBTQ laws.

The "no fly lists" will likely be around for the foreseeable future as Monday the U.S. Supreme Court opted against taking up a lawsuit filed by Texas state officials seeking to have California's travel ban be deemed unconstitutional. Conservative Justices Samuel Alito and Clarence Thomas dissented from the 7-2 majority decision and would have heard the case.