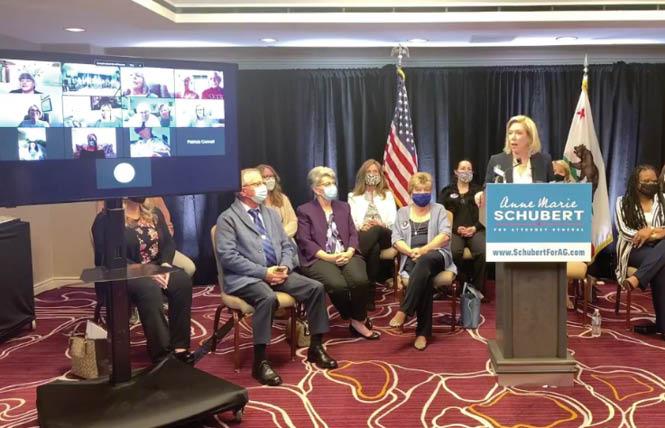 Schubert, an independent who left the Republican Party a few years after she was elected as Sacramento County's chief law enforcement officer in 2014, is the lesbian sister of Proposition 8 campaign consultant Frank Schubert.

She rose to national prominence due to her role in the prosecution of Joseph James DeAngelo Jr., who is also known as the Golden State Killer. DeAngelo pleaded guilty to 13 counts of first-degree murder last summer.

After former state attorney general Xavier Becerra was sworn in as President Joe Biden's secretary of the Department of Health and Human Services, Governor Gavin Newsom last month nominated Bonta, a former Assemblyman representing Oakland, Alameda, and San Leandro, as the next AG. Bonta was confirmed by the Legislature last week.

The state's first Filipino attorney general, Bonta took office April 23. He must run in 2022 for a full term but could end up having to run to fill out Becerra's term on the same ballot as the recall against Newsom expected to be held this fall.

In her announcement Monday, Schubert used the Golden State Killer case, among others, to frame herself as the antidote to what she repeatedly called the "chaos" of the state's two most prominent cities: San Francisco and Los Angeles. She was critical of "rogue prosecutors," a not-too-veiled reference to San Francisco's Boudin and Los Angeles County District Attorney George Gascón, who himself was formerly the top prosecutor in the City by the Bay.

"Countless victims are being abandoned by the very people we've entrusted to protect them," Schubert said. "In San Francisco you have a district attorney — a former public defender — who is letting violent criminals out with little consequences. ... You have a city where every day citizens can't leave their cars for four to five minutes without fear of being ripped off. Tourists think it's too dangerous to visit that beautiful city. A thriving economy depends on a safe society. It is true and tragic that San Francisco is suffering."

When reached for comment April 26, Boudin said it is Schubert whose approach has been lacking.

"District Attorney Schubert has always been committed to a failed, tough on crime approach where the powerful, and especially police who commit acts of violence, are never held accountable," Boudin wrote in an email. "It is unsurprising, then, that as she launches her bid for California attorney general, she is lashing out at progressive prosecutors who do not hold her outdated political values."

Schubert said Gascón is the person who brought the policies to San Francisco that resulted in disorder there. Gascón, she said, "cares more about violent criminals than mothers crying about their grieving children."

Gascón's office did not immediately respond to a request for comment.

Schubert said Bonta has "promised to take their policies to the rest of the state."

"The newly-appointed attorney general has voted for policies and laws that hurt crime victims and are destroying public safety in this state," Schubert said.

Specifically, Schubert said Bonta voted to weaken gun laws, and his response to hate crimes was to "set up a hotline."

"I will work relentlessly every day I'm proud to serve," Schubert promised.

"Anne Marie Schubert attempted to take us backwards with Proposition 20 last year and California voters shot her down," Cristine Soto DeBerry, the founder and executive director of the Prosecutors Alliance, stated, referring to the defeated ballot measure that would have added crimes to a list for which early parole is restricted.

"This is a prosecutor that rejects the science showing her dated way of thinking exacerbates rates of reoffense and creates more victims of crime, has led to overcrowded prisons and the racial disparities that have come to define our system of justice," DeBerry stated. "She's also taken substantial resources from police unions and looked the other way when police kill unarmed men of color."

Indeed, in 2019 Schubert declined to prosecute the officers involved in the shooting of Stephon Clark, 22, a Black man who was killed in the backyard of his grandmother's Sacramento home in March 2018 with a cellphone in his hand.

"But it's her role as secretary-treasurer of [the California District Attorneys Association] that's bound to raise some eyebrows," DeBerry, a former chief of staff to Gascón and Boudin, continued. "She had oversight responsibility over the admitted misappropriation of millions of dollars set aside for environmental crimes and asset forfeiture which has prompted a DOJ investigation, and if elected she'd have oversight over the investigation into her own wrongdoing."

According to the Sacramento Bee (https://www.sacbee.com/opinion/california-forum/article249668988.html), an internal audit found the group misappropriated some $3 million set aside for environmental enforcement for other purposes, including lobbying efforts.

Schubert, through a press representative, did not let up in a statement to the B.A.R. later April 26.

"Cristine Soto DeBerry has worked for both George Gascón and Chesa Boudin, who are creating the chaos that I focused on in my announcement speech today," Schubert stated. "It's therefore no surprise that she wants to change the subject rather than defending her bosses' records. But make no mistake about it: as attorney general, I will step in to protect the public safety in Los Angeles and San Francisco, and the appointed attorney general will not. As to Ms. Soto Berry's mischaracterizations, CDAA has previously responded to these questions and I refer you to the organization's statements on that matter."

The CDAA's statement March 5 formally calls for the state attorney general's office to investigate the matter.

Bonta political adviser Dana Williamson stated April 26 that the allegations against Bonta are "Trumpian lies" and that Schubert's candidacy is "tremendously flawed."

"She has refused to bring excessive force cases and serves as treasurer of an organization that misspent millions meant to prosecute polluters," Williamson stated. "Now she wants to lead the Department of Justice — the same entity that is investigating her organization's misdeeds."

There's also a third candidate in the race. Moderate Republican Nathan Hochman, former assistant U.S. attorney in the Bush administration and the former president of the Los Angeles Ethics Commission, announced his bid last week to be AG.

Updated, 4/26/21: This article has been updated with additional comments.