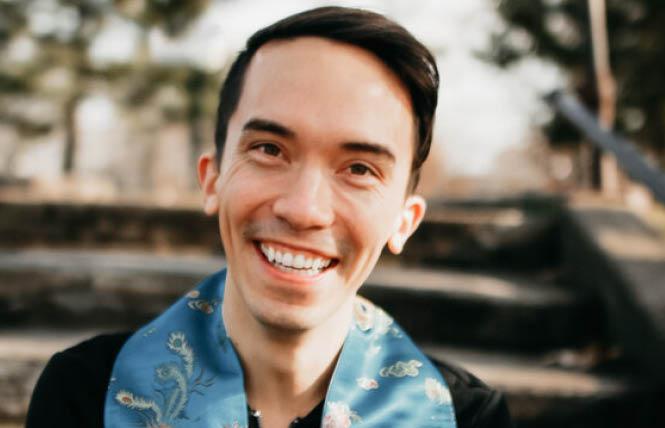 A gay Asian American United Methodist pastor — whose Minneapolis church is just blocks away from where George Floyd was murdered last year by a former police officer — has come out with a new book about how queer people can live the Christian faith.

Sit, a pastor at New City Church, recalled the tense days in the aftermath of Floyd's death. Derek Chauvin, then a Minneapolis police officer, was convicted in Floyd's May 2020 murder on April 20.

"Where we meet is very near George Floyd Square," Sit told the Bay Area Reporter. "We're one block south of Lake Street. When you saw burning images of the uprising, that was on Lake Street.

"We had a vigil, an online vigil that had tens of thousands of viewers," he continued. The church organized patrols to help with neighborhood safety. Some, walking through alleyways, "found bottles of gasoline stashed away, wood soaked in gas, and banners with swastikas," Sit said.

"I think the takeaway is that as a church we believe that Jesus saves us; and not just saves our souls: Jesus cares about justice, and communities caring for each other," Sit added.

The Reverend Dana Neuhauser has served at New City Church since 2017.

"I actually was at the site, at the corner of 38th and Chicago [streets] when the verdict was announced," Neuhauser told the B.A.R. "It was a mixture of shock, relief, and people feeling energized by the decision. But, also, there is a widespread and profound recognition that this is one small piece of a much bigger puzzle and there is a lot of work to be done."

These practices are worship, centering the marginalized, prayer, groups, Sabbath, leadership development, generosity, planting, and what Sit called "putting it all together," or "weaving all these so that they are a part of your life."

"My third chapter is dedicated to prayer, and queer people are particularly spiritual," Sit said. "I've met so many queer people drawn to prayer, to meditation, because they have had to wrestle with questions of identity and belonging since puberty. In my experience in the gay community, queer people are hungry and drawn to God — and, the opposite of what the conservative church says, we are very spiritually mature."

Sit estimates that 40-50% of his congregation "is queer in some way."

"Tyler has a unique gift of being extremely dynamic, but also being a compassionate and attentive pastoral presence," Neuhauser said. "He brings a high-energy style in front of large groups of people, but when people are seeking more compassionate care he is also really attentive to people. So, it's a unique blend of those gifts that come through in his ministry."

As the B.A.R. previously reported, the United Methodist Church (the second largest Protestant denomination in the United States, and the third largest Christian denomination) is experiencing deep divisions over the issues of same-sex marriage and LGBTQ clergy. A conference last year that would have discussed whether to allow those United Methodists opposed to same-sex marriage and LGBTQ clergy to split from the denomination was postponed due to the COVID-19 pandemic.

Sit says he wants to "create space that not only tolerates people, but celebrates queerness as a gift from God."

Sit is also applying his Christian faith to the struggles being faced by the Asian American community.

According to an analysis released last month by the Center for the Study of Hate and Extremism at California State University, San Bernardino, reported hate crimes targeting Asian Americans in 16 of the largest U.S. cities increased some 150% in 2020, even though reported hate crimes overall decreased 7%.

"I'm queer and Christian and Asian American, so it's been an interesting time to put these in conversation with each other," Sit said. "One of the things we in the [Asian American and Pacific Islander] community deal with is the narrative of perpetual 'foreigner-outsider' status. If we 'look Asian,' it means we're not 'from here,' no matter how long we've been here. ... Language like 'China virus' exacerbates that perpetual foreigner status."

Sit said other Americans need to recognize the ways in which Asian Americans have contributed to the fabric of the U.S.

"Asian Americans have been around for 150 years and have shaped this country in significant ways," Sit said. "Viewing Asian Americans as foreigners and outsiders is a tool of white supremacy, and erases who we are as a people."

"Throughout the Bible, there is a strong discourse on welcoming the stranger, welcoming foreigners and practicing extravagant hospitality," Sit said. "One thing we do, when we do that, is reckon with our fear of others. The love of God is greater than our fear of outsiders. Especially as queer people: most queer people I know what it's like to be profoundly excluded. If we can hold on to that feeling and use it to empathize with other marginalized people, it's a powerful way to bring about justice.

"Queer people know what the tomb is like — the tomb of Jesus, that was sealed after the crucifixion," Sit continued. "The act of coming out is a microcosm of the resurrection in the world. When we come out of the closet, we honor the God who made us queer. It's not just about 'It's OK you're gay.' It's saying 'your queerness is a particular way God is breaking into the world, and we need to zoom in on it, focus on it, and cherish it.'"