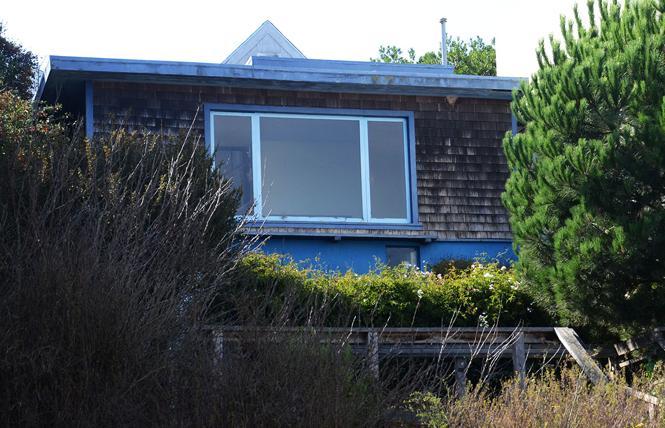 On a hilly residential street in Noe Valley, the small house at 651 Duncan Street gives no hint of its outsized role in influencing over 50 years of LGBTQIA+ civil rights. From the moment they purchased the property together in 1955, partners, advocates, and authors Phyllis Lyon and Del Martin energized the San Francisco LGBTQIA+ community, offering their home as a safe space for women to champion women's rights. Over many decades they successfully fought to validate and decriminalize lesbian identity, shape anti-violence and anti-discrimination policies, and promote marriage equality and elder rights.

At a time when lesbianism was characterized as immoral or illegal, there were almost no public places lesbians could safely meet in 1955. This is why the Lyon-Martin House had to serve as the de facto headquarters for the Daughters of Bilitis, the first national lesbian rights organization and one of the most influential and enduring LGBTQIA+ organizations in the United States. Over the next four decades, Lyon and Martin would be instrumental in founding or supporting numerous organizations, councils, and commissions that advocated for gender equality and LGBTQIA+ civil rights.

Their lifetime of work touched the lives of countless women and men struggling with their identity and sexuality, who were seeking to achieve self-acceptance while also combatting discrimination, harassment, and violence. In her public comment letter to the San Francisco Historic Preservation Commission in February, Mary Means, the groundbreaking founder of the nationwide Main Street program, shared just how much the writings of Lyon and Martin meant to her — and many girls like her — growing up in the 1950s.

"Had it not been for courageous Phyllis Lyon and Del Martin, their pioneering visibility and their magazine The Ladder (which came in a brown paper wrapper), many more of us would have buried our silent pain with alcohol and drugs, or even ended our lives," Means wrote.

Remarkably, Lyon and Martin continued to shatter barriers well into their 80s, achieving international recognition in 2004 as the first same-sex couple married in San Francisco by then-mayor Gavin Newsom. Lyon acknowledged the broad-reaching implications of their 2004 wedding saying, "We got it started for everybody else. We didn't get married just for us. We knew it was important to a lot of other people."

The couple married a second time in 2008 immediately following the California Supreme Court decision In re Marriage Cases — in which Lyon and Martin were plaintiffs — establishing that it is unconstitutional for the state to ban same-sex couples from obtaining a civil marriage. Upon the passing of Martin in 2008, House Speaker Nancy Pelosi (D-San Francisco) credited them with paving the way for so many other same sex couples, saying, "We would not have marriage equality in California if it weren't for Del and Phyllis."

While the many achievements of Lyon and Martin have earned accolades, from the American Civil Liberties Union to NLGJA: The Association of LGBTQ Journalists to the White House, the home where they lived together for 65 years and conducted much of their work is largely unknown and unprotected. In the documentary entitled "No Secret Anymore: The Life and Times of Phyllis Lyon and Del Martin," Lyon observed that she and Martin never would have been able to achieve the level of political activism and organizing they did in San Francisco if not for their purchase of the Duncan Street property years earlier.

It is a problem that is all too common. Sites of women's history and LGBTQIA+ history are woefully underrepresented in official designations, such as the National Register of Historic Places and city local landmark programs. Even in a city like San Francisco with such a rich LGBTQIA+ history, only four of the city's hundreds of local landmarks are listed for their representation of LGBTQIA+ achievements. And none of them recognize the importance of lesbian activism.

It is this kind of systemic disparity that inspired the National Trust for Historic Preservation to launch a new national campaign for Where Women Made History to identify, honor, and elevate places across the country where women have changed their communities and changed the world. By galvanizing support for the preservation of sites like the Lyon-Martin House, we help create a more truthful and inclusive collective history where people can see themselves reflected in the places around them.

Thanks to the leadership of gay San Francisco Supervisor Rafael Mandelman, the Friends of Lyon-Martin House, and many others, the San Francisco Historic Preservation Commission took a critical step in February by approving designation of the Lyon-Martin House as San Francisco's first local landmark of lesbian activism. Now, the responsibility falls to the Board of Supervisors Land Use and Transportation Committee to approve this designation at its April 26 meeting.

With its vote the Board of Supervisors panel can honor the pioneering roles that Lyon and Martin played in shaping policies that benefited not only the LGBTQIA+ communities in San Francisco, but across the nation. (The full board will then vote on the matter.) And a vote for landmark designation also will provide critical protection for this modest home so that the accomplishments of Lyon and Martin will be remembered and serve as a source of inspiration for years to come.

With the support of the property's new owner and Mandelman, a coalition — including the Friends of Lyon-Martin House, the GLBT Historical Society, San Francisco Heritage, CyArk, and the National Trust — has formed to conduct extensive documentation of the Lyon-Martin House and make its history widely accessible to new audiences, while also identifying contemporary uses for the property that will encourage a new generation of activists to build on Lyon and Martin's legacy.

The Board of Supervisors should embrace this opportunity to correct decades of oversight and inequity by approving the Lyon-Martin House as a San Francisco landmark of women's history and LGBTQIA+ civil rights activism.