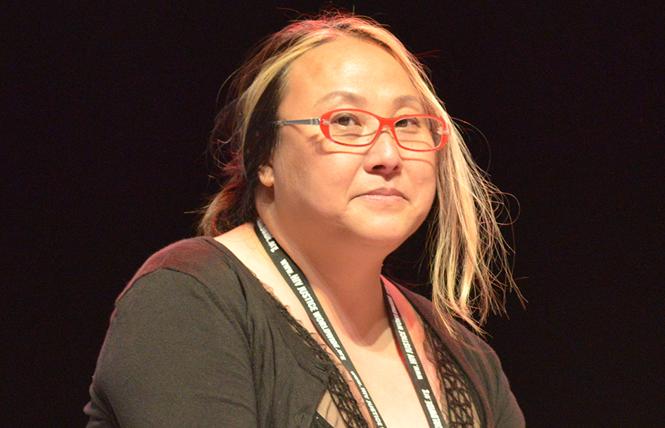 Transgender women in the United States need better access to HIV prevention and treatment services, according to a new survey from the federal Centers for Disease Control and Prevention released ahead of National Transgender HIV Testing Day April 18.

According to the report, four out of 10 trans women surveyed in seven major U.S. cities, including San Francisco, are living with HIV. The prevalence rose to nearly two-thirds for Black trans women.

"I am disheartened to see the findings, but none of this was news to the trans community," San Francisco Health Commissioner Cecilia Chung of the Transgender Law Center told the Bay Area Reporter. "It took almost four decades to get a clear affirmation of our repeated message about the inequity trans women experience across all health services."

As the B.A.R. reported online Wednesday, trans advocates and lawmakers in California are seeking $15 million over two years beginning in 2022 in state funding to meet the various health needs, including HIV services, of trans and nonbinary residents throughout the Golden State. In 2020 legislators established the Transgender Wellness and Equity Fund but did not allocate any money toward it.

For their report CDC researchers interviewed 1,608 transgender women during 2019 and early 2020 in Atlanta, Los Angeles, New Orleans, New York City, Philadelphia, San Francisco, and Seattle. The survey period preceded the COVID-19 pandemic, which has limited access to HIV testing, PrEP, and other health and social services.

Overall, 42% of those with valid test results were HIV-positive. But this hides substantial disparities: 62% of Black trans women had HIV, compared with 35% of Latina trans women and 17% of white trans women.

In addition, 42% of the women said they had experienced homelessness during the past year and almost two-thirds had an income at or below the poverty level.

The survey found that only 32% of HIV-negative respondents were using PrEP, which is recommended for people of any sexual or gender identity who are at risk of exposure to HIV via sex or shared drug injection equipment.

Previous research has found that low PrEP uptake among trans women may be attributable to a variety of factors including medical mistrust, lack of trans-inclusive outreach, and concerns about interactions between hormones and PrEP. However, studies have shown that PrEP does not substantially interfere with hormone therapy or vice versa.

These findings highlight the need for scaled-up HIV prevention and care for transgender women, the report concludes. The researchers stressed the importance of culturally informed approaches that are responsive to community needs and include service delivery in non-traditional settings.

Toward that end, the CDC is "actively working to address disparities through strategic program funding and partnerships throughout the nation," the agency indicated in a press statement. The CDC is providing nearly $11 million per year over five years for 30 community-based organizations to support HIV testing, linkage to care, and prevention services focused on trans people. What's more, the federal Ending the HIV Epidemic initiative is supporting efforts to overcome barriers to HIV prevention and treatment in 57 hard-hit areas, including the seven cities where the survey was conducted.

"These data provide a clear and compelling picture of the severe toll of HIV among transgender women and the social and economic factors — including systemic racism and transphobia — that are contributing to this unacceptable burden," said Dr. Demetre Daskalakis, a gay man who's the new director of the CDC's Division of HIV/AIDS Prevention. "Reducing HIV in these communities will require that public health and other providers of social and prevention services design innovative and comprehensive status-neutral solutions to overcome barriers to whole person prevention and care."

The CDC aims to employ a "status-neutral" approach that encourages ongoing engagement in HIV prevention, care, and treatment regardless of a person's HIV status, with HIV testing acting as a gateway to either prevention or treatment services, depending on the result.

While this survey focused on trans women, Chung, herself a trans woman living with HIV, also drew attention to the lack of services for transgender men.

"The invisibility of the prevention and treatment needs of trans men has become glaring," she told the B.A.R. "We are seeing a rise in unmet needs for trans men, who have historically been viewed as 'low-risk.' I hope it will not take another four decades for our trans brothers to get the attention they deserve."