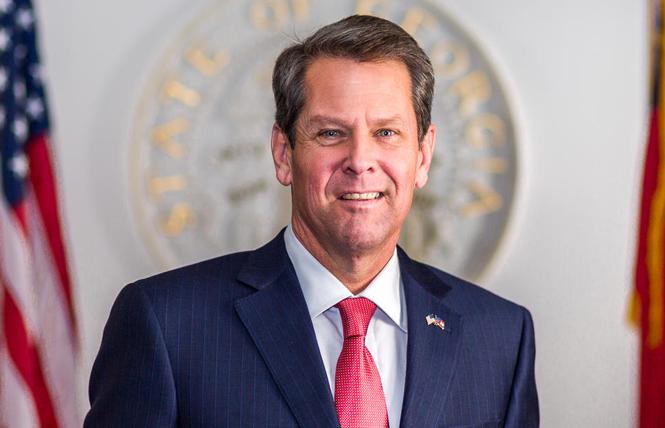 The National LGBT Media Association took a principled stand this month when it announced that it would not meet in Georgia due to the state having recently passed a hideous voter suppression law. The group is the nation's largest queer media association, composed of 11 legacy publications, including the Bay Area Reporter. The group had planned to meet in the state later this year.

"We in the LGBT community built a movement fighting for equality, and we stand with those who fight this 'Jim Crow, Part 2' legislation in order to make their voice heard and their vote count," the association stated in an April 9 news release. "Too many people in power wish to keep marginalized communities invisible and without proper representation in government, and we must be vigilant in fighting against their unjust and unfair discrimination."

While much has been made of the law's provision that offering food or water to people waiting in line to vote could result in misdemeanor charges, the law is far more chilling, according to an in-depth analysis by the New York Times. Indeed, as Times reporters Nick Corasaniti and Reid J. Epstein make clear, "The Republican legislature and governor have made a breathtaking assertion of partisan power in elections, making absentee voting harder and creating restrictions and complications in the wake of narrow losses to Democrats." They are referring, of course, to Joe Biden's victory in the presidential race last November, and the two U.S. Senate runoffs in January in which Democrats Jon Ossoff and the Reverend Raphael Warnock prevailed over Republican incumbents, flipping the upper chamber to Democratic control with a 50-50 split (Democratic Vice President Kamala Harris is the tie-breaker).

Among the drastic changes to voting in the Peach State, people will now have less time to request absentee ballots — from nearly six months before an election to less than three, the Times analysis found. The shorter window will also limit opportunities for get-out-the-vote efforts, the reporters noted, "and could put greater strain on local election boards, which will have less time to process ballot requests."

There are also strict new ID requirements for absentee voters that harken back to Jim Crow-era laws that used poll taxes, literacy tests, and other hurdles to disenfranchise Black voters. Under the new law, if voters fail to follow all the new steps — including printing their date of birth or a partial Social Security number — their ballots could be tossed out on pretext.

It is now illegal for the Georgia secretary of state to automatically mail out absentee voter applications to all registered voters. This was done last year because of the coronavirus pandemic. The Times analysis noted, "The new law also forbids third-party groups to prefill applications for voters, which made applying for an absentee ballot easier for many voters." Georgia Republicans deemed these new "safeguards" necessary correctives despite the fact that there were no reported cases of abuse or illegal activity related to absentee voting.

The number of drop boxes are severely limited under the new law and won't have 24-hour access. "The boxes must be placed indoors at government buildings and early-voting sites and will thus be unavailable for voters to drop off their ballots during evenings and other nonbusiness hours," the Times analysis stated. This, of course, will suppress turnout for those who may only have time to drop off their ballot after-hours or on weekends. Voters would have to resort to returning their ballots via the U.S. Postal Service, which itself has been hampered by delayed delivery times due to operational changes that were implemented by the disastrous Postmaster General Louis DeJoy.

Under the law, early voting is expanded in many small counties, but not larger ones, according to the analysis. Again, this likely will affect working people, including minorities and LGBTQs, since the law prohibits early voting before 7 a.m. or after 7 p.m. Counties also have the choice to opt for Sunday early voting, and those that decline to do so would be limiting ballot access for parishioners at Black churches, which have often organized their congregants to vote after worship services, according to the Times analysis.

When counting the ballots, the law gives power to the Republican-controlled Legislature at the expense of the duly elected secretary of state. You may recall that last year Georgia Secretary of State Brad Raffensperger refused to buckle under the hardball tactics of former President Donald Trump and his cronies to not certify the state's votes for Joe Biden — he decided to follow the law instead. Well, now the law's been changed and Raffensperger, a Republican, has been demoted under it, even as he recently defended it. NPR reported last week that he stands with Governor Brian Kemp in maintaining that the law safeguards elections. He is obviously worried about his own political future, as the Trump-lovers blamed him for giving the state's electoral votes to Biden. But more significantly, the new law removes the secretary of state as chair of Georgia's State Election Board, allowing a Republican-majority board to take over local election offices temporarily.

It's for all these reasons and more that the National LGBT Media Association took the position it did. "With this law, it is now easier to get a gun in Georgia than to vote," stated Leo Cusimano, co-chair of the organization, which will not travel to the state for any future meetings until it creates fair election laws that ensure all people have equal and fair access to vote.

The members of the national group include the Georgia Voice, as well as Bay Windows in Boston; Between the Lines in Detroit; Dallas Voice; Gay City News in New York City; Philadelphia Gay News; Los Angeles Blade; South Florida Gay News; Washington Blade; Watermark in Tampa, Florida; and the Windy City Times in Chicago. These publications recognize the importance of voting — not just for queer people, but for all Americans. We're proud to stand with our sister publications against Georgia's discriminatory limits on voting access.