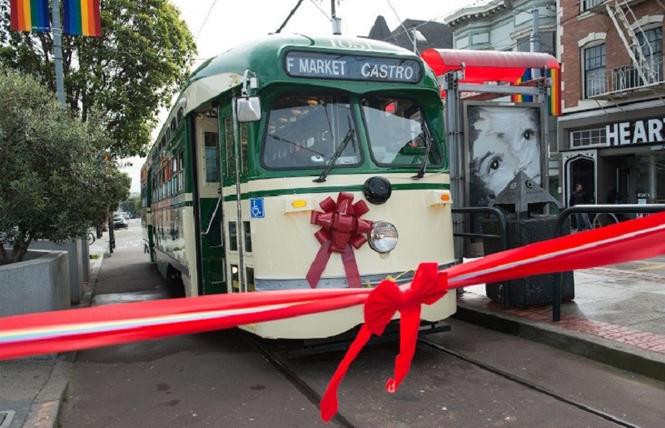 The Harvey Milk F Line streetcar No. 1051 was rededicated in 2018. Photo: Courtesy SFMTA

Just as the historic streetcars are slated to resume service after being suspended during the COVID pandemic, a city plan to stop Muni's F Line service to the Castro for up to four years is eliciting strong negative reactions in the neighborhood.

The streetcars — which traverse from Fisherman's Wharf to the Castro — have been replaced by bus service for much of the health crisis. They are scheduled to restart service May 15 along with the resumption of some subway service on the K and N lines.

But as part of the multi-agency Better Market Street project, the F Line is slated to be substituted by bus service again "for the duration of phase I construction, which is anticipated to take approximately two to four years," Coma Te, public affairs officer for San Francisco Public Works and the head of communication and outreach for Better Market Street, confirmed to the Bay Area Reporter April 12.

Rick Laubscher, president and CEO of the nonprofit Market Street Railway, told a meeting of the Castro Merchants Association earlier this month that this phase of the project is slated to begin in 2021. Still, speaking to the B.A.R. April 19, he finds the timetable "incomprehensible."

"As we recover from this pandemic, is three years of disruption really a good idea?" he asked. "Is it really necessary?"

To answer these questions, city officials from the San Francisco Public Utilities Commission, the San Francisco Municipal Transportation Agency, and Public Works will be appearing at a virtual meeting of the community working group for the Better Market Street project Monday, April 26, at 6 p.m.

Laubscher said he wants to know "what exactly is the schedule? How long will the disruption to the F Line go? And, is there anything that can be done to shorten the schedule?"

Although the streetcars will be replaced with bus service, Laubscher stressed that this is not adequate for such a long stretch of time, especially for seniors and tourists, many of whom make their way to the Castro using the rail line.

"The visitors who love to take the F Line are not going to have the Castro as the end of the line anymore," Laubscher said. "The F Line should be exploited for the best value up and down the line, especially on the upper Market Street area, where they provide more than the Muni Metro. Between Church [Street] and Van Ness [Avenue] there are no Metro stops."

The line is a rolling history exhibit popular with locals and tourists alike. In addition to celebrating historic trolley lines from across the world with streetcars representing various cities, streetcar No. 1051 celebrates the late gay supervisor Harvey Milk, who represented the Castro when he served on the Board of Supervisors in the late 1970s.

Not only is streetcar No. 1051 painted in the same green and cream colors they had when Milk used them, inside it is a historical exhibit about Milk, who was assassinated along with then-mayor George Moscone in 1978.

Laubscher isn't the only one who wants answers from city officials about the length and necessity of the project. Masood Samereie, a straight ally who is the president of the Castro Merchants Association board, stated to the B.A.R. through spokesman Dave Karraker that the group's position is that these repairs should be put off at least two years to assist the neighborhood's economic recovery from the unprecedented loss of business due to the COVID-19 lockdown.

"Castro Merchants is working very hard with city officials to develop a workable solution and we are pleased to see they are open to discussing it," the statement reads. "Our position is we need to find other solutions that would keep the F-Market streetcar operational for its full route for at least two years post the California reopening date announced by [California] Governor [Gavin] Newsom of June 15.

"Anything short of that would be a devastating blow to the Castro as the F-Market has proven to be a constant lifeline bringing tourists to the neighborhood from the hotel districts," it continues. "City busses will simply not be as appealing. The city needs to carefully consider any project that might disrupt the ability for customers to get to the Castro and for our neighborhood businesses to recover from this horrible pandemic. We look forward to finding a solution cooperatively with them on this critical issue." 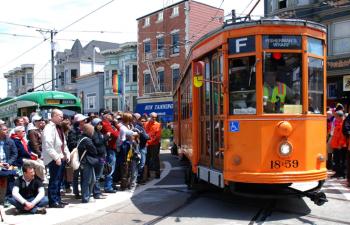 'Devastating' to community
Terry Asten Bennett, a straight ally who is general manager of Cliff's Variety on Castro Street, expressed much the same sentiment.

"This is going to be devastating to the community," she wrote to the B.A.R. "As a mobile tourist attraction, the Castro depends on it to bring tourists from Fisherman's Wharf to the Castro [the route of the F Line]. Our community depends on visitors coming to the Castro to thrive. When it is made unnecessarily difficult, we are all hurt by it."

"I have concerns," wrote Mandelman, who represents the Castro at City Hall. "Certainly, after Van Ness [bus rapid transit] and Central Subway, San Franciscans understand that these large infrastructure projects can drag on much longer than expected. We need more clarity and certainty on the projected duration of the entirety of the Better Market Street Project. That's important for the F, but for a lot of other interests and priorities as well."

The Van Ness BRT project, which broke ground in 2017, was planned to be completed in 2019. Still ongoing, the estimated completion date is 2022.

The Central Subway project was initiated after the Embarcadero Freeway (which spat out Bay Bridge traffic onto Broadway, bringing motorists to the Chinatown and North Beach neighborhood businesses) was torn down following the 1989 Loma Prieta earthquake. Construction on the new subway line that will connect Chinatown and the South of Market neighborhood began in 2012. Originally scheduled to be completed in 2018, its opening has been delayed until mid-2022 at the earliest.

Mandelman added that an update on Better Market Street is planned for the May 25 meeting of the Transportation Authority board.

Better Market Street project manager Cristina C. Olea said that the four agencies involved in the project (BART is the other one) are each in charge of what work needs to be done.

Gay BART director Bevan Dufty, himself a former supervisor who represented the Castro, told the B.A.R. that he "intends to pursue change with Supervisor [Rafael] Mandelman." He intends to participate in the April 26 meeting to "get a handle on the leadership."

Dufty said that BART needs to add canopies above entrances to comply with state law.

"BART's role in Better Market Street has been focused on our escalator replacement project — most escalators on Market Street are over 40 years old, but they're only good for 25 years," he explained. "I was not aware of the disruption to the F Line. ... But three blocks, two-to-four years, doesn't make much sense."

Dufty, a Castro resident, said shutting down the streetcar would "discourage people staying on the waterfront from visiting our neighborhood."

"I am deeply concerned with the Castro's revival," he said. "I don't think it's good for the Castro, given all the hardships. I live in this neighborhood. I know how businesses have struggled."

Olea told the B.A.R. April 19 that the Market Street roadway is too narrow for the streetcar to run where the work is to take place, which in the first phase begins at Fifth Street and ends at Eighth Street.

"It's hard for us to work in the curb lane with cars running in the construction zone," Olea said. "It's a constricted roadway with little space for us to work in, and there's a lot of work to be done."

Te stated that "at a minimum, historic streetcars will run between Fisherman's Wharf and the Ferry Building throughout the full duration of Better Market Street construction. But that doesn't help businesses in the Castro.

The initial phase is focused on transit elements that are "in dire need of repair and replacement," Te stated.

"The first construction phase of the project will focus on critical underground infrastructure and surface-level state of good repair improvements, which will include new transit boarding islands, track, overhead lines and traction power replacement, BART grate replacement and curb-to-curb roadway paving on Market Street between Fifth and Eighth streets," Te wrote. "It's well documented that these elements are in dire need of repair and replacement or they risk failure.

"To conduct this work, the Muni overhead power lines need to be taken down for the duration of construction," he continued. "That is the biggest challenge to running continuous trolley service on the full F Line route. However, the project team expects to be able to maintain F Line service from Fisherman's Wharf to the Castro with a combination of historic trolley cars and a bus substitution along Market Street to bypass construction."

A spokesperson for Jeffrey Tumlin, a gay man who is the city's director of transportation, did not respond to a B.A.R. request to interview Tumlin regarding SFMTA's role in the project.