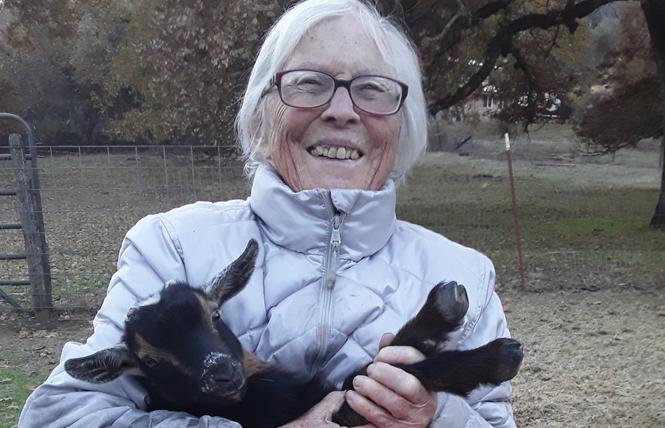 Helen was born between September 25 and 28, 1925 on the kitchen table of her Ingleside Terrace home in San Francisco. While her birth certificate said the 25th, her family always maintained the 28th as her birthday, so we'll never know exactly.

Helen was preceded in death by her father, mother, and brother. Her father's passing, when she was 8, particularly affected her. When she refused to eat, she was sent for the summer to a sheep farm in the Delta so that fresh air might console her. That time awakened her connection to the land that would shape her future as a rancher.

The labor shortage of World War II provided the opportunity for Helen to learn drafting, attend UC Berkeley, and then after the war's end, leverage those skills into a career. She worked at Takahashi Engineering for many years, where she designed plumbing on large commercial projects, until retiring in her 70s. Helen invested her self-made wealth wisely when she bought the Full Moon Ranch in 1975.

Helen always loved animals, from the zebra finches she had as a child to the series of dogs, many Dobermans, who she devoted herself to over the years. She rode horses, mothered a slew of bummer lambs, and nursed hurt animals in her home. Later in life, she took to collecting the feathers that fell in her yard, both the worthy specimens and the littlest bits of fluff. She has promised to come back in the next life as a bird, freely floating on the wind.

Helen was fiercely independent, living alone off-grid, on well water, stoking a wood oven until the end. She lived simply herself but was incredibly generous to others. Over the years the ranch served as a place of respite for many, including through the Hopland Women's Music Festival, which ran there from 1990 to 2004. She also taught a generation of folks to work cattle, welcoming people twice a year for Round Up, sharing her skills and eventually supervising from the sidelines. In her later years, she loved Speyside scotch, Sudoku, puzzles, and movies.

She is survived by her children, Kellen Kaiser and Ethan Kaiser-Klimist; her life partner, Nina Kaiser; and many friends.

In lieu of flowers, feel free to donate to the Humane Society for Inland Mendocino County at https://mendohumanesociety.com/