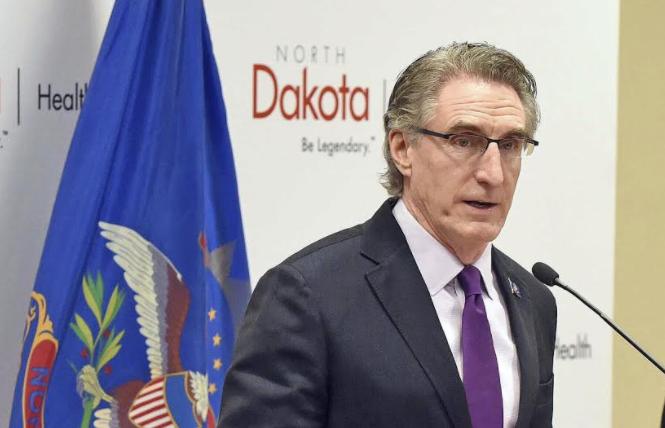 North Dakota is set for addition to the list of states California bans state-funded travel to now that lawmakers in the Peace Garden State have adopted anti-LGBTQ legislation. It is the second state in recent weeks to pass a bill targeting LGBTQ individuals, thus landing it on the Golden State's "no fly list."

It is a direct attack against the U.S. Supreme Court's 2010 decision in Christian Legal Society v. Martinez that upheld as constitutional so-called all-comers policies requiring student organizations receiving financial and other support from their institution not to discriminate against prospective members based on their race, sex, religion, sexual orientation, or gender identity. The North Dakota law undermines inclusive "all-comers" policies at the state's public colleges and universities by allowing student organizations to cite freedom of speech for discriminating against LGBTQ students.

"North Dakota Governor Doug Burgum's shameful decision to sign this discriminatory bill undermines non-discrimination policies at colleges, universities, and high schools across the state. Student organizations can now choose to turn away a range of potential members and leaders — from LGBTQ students to students of particular gender, race, or religious belief — and still receive state funding," stated Alphonso David, president of national LGBTQ rights organization the Human Rights Campaign. "This law is nothing more than a harmful attempt by Governor Doug Burgum and North Dakota legislators to discriminate against LGBTQ and other marginalized communities. No student should be denied full access to and enjoyment of educational, social, and leadership opportunities typically offered by colleges and universities because of who they are."

Arkansas will also be added to California's banned travel list due to its governor, Asa Hutchinson, signing into law March 25 Senate Bill 354, which bans transgender women and girls from participating in school sports consistent with their gender identity. The discriminatory law covers extracurricular and school sports at the elementary, middle, high school, and collegiate level.

Depending on when the state laws officially take effect, Arkansas and North Dakota will bring the number of states on California's "no-fly list" to 14. The office of the state attorney general oversees the list.

Signing off on adding the two Republican-led states to the banned list could be one of the first actions taken by Rob Bonta, currently a Democratic Assemblyman from Oakland who was named by Governor Gavin Newsom as the state's next attorney general. Bonta's appointment needs to be confirmed by the Legislature.

Texas is suing California in federal court in an attempt to have the travel ban law thrown out. It recently asked the U.S. Supreme Court to hear the matter, arguing in its brief to the justices that "California's travel ban is an affront to the sovereignty of Texas — as well as the 10 other states that California has blacklisted."

In its briefings with the court, California has asked the justices not to take up the case.

"States in our Union often disagree, sometimes vigorously," California argued. "Neither California nor Texas can make the other conform to its preferred policy views. But each is surely entitled to criticize and decline to subsidize the other's contrary policies."

San Francisco keeps its own list of "no-fly" states it bans city-funded travel to as well as bans city departments entering into contracts with businesses based in those states. Because San Francisco's list covers not only states that have adopted anti-LGBT laws since 2015 but also those that restrict abortion access to their residents, travel to both Arkansas and North Dakota is already banned.

The two states landed on the banned travel list overseen by the city administrator's office January 1, 2020. The city now bans its staffers from traveling on the public dime to nearly half the country, as there are currently 24 states on its list.