Guest Opinion: How I learned to stop worrying and love the vote 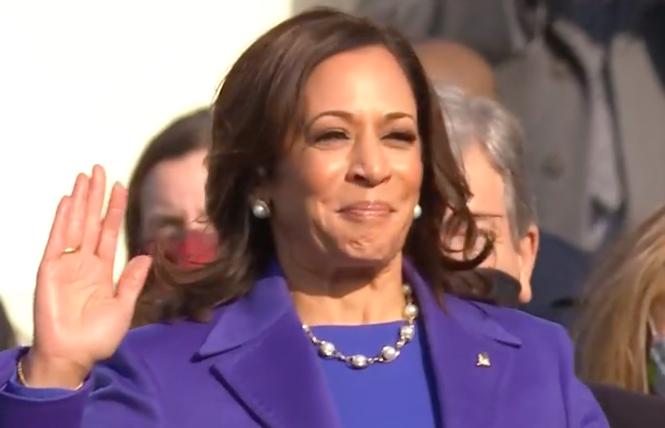 To say I held my bated breath until it was clear that "Uncle Joe" had won would be the understatement of a century. Or two. Add in "Auntie" Kamala and my gay self has been in an election coma ever since.

There are a few things I want now that Joe Biden and Kamala Harris were inaugurated January 20 as president and vice president, respectively.

Who you calling a bitch? U-N-I-T-Y (It is NOT on my agenda)
For four long and hurtful years every part of my Black, LGBTQ, and HIV-positive self has been under relentless assault. My trans brothers and sisters, who were braver and more patriotic than any member of Dollar Store Hitler's family, were told they are not good enough to give their lives for this country. That they deserved none of the benefits that everyone else who serves can access. Gay folks trying to give kids a normal life rather than one spent in foster care have been told that my gay tax money is going to those who say they cannot be a part of building better Americans.

But most importantly, I have been told for four years my Black Life Doesn't Matter. All Lives Matter. Blue Lives Matter. But Black lives do not. When a white football player prays after a touchdown it's a beautiful thing. When Colin Kaepernick knelt during the racist national anthem he is a son of a bitch and blackballed. Because he would not stand for police killing Black people one more second. Breonna Taylor died in her sleep. Kyle Rittenhouse, charged with homicide in the shootings of two protesters in Kenosha, Wisconsin, got a Go Fund Me. George Floyd got a knee to the neck. White terrorists attacking the U.S. Capitol got selfies with cops and Insta content while getting helped down the stairs.

So. NO UNITY. Not with these people. Cheeto Mussolini and his enablers need to be held accountable. Charged. Tried. And if convicted fairly, jail. Don't be all healing the nation now. You wanna heal a nation? Accountability.

For colored girls who've considered not voting, when the rainbow wasn't enough
I'm going to need respect for the fact that Black folks, no, Black women, are the reason Biden is president. Black women are the reason the Senate isn't going to block everything he does for the next four years. Yet, who got Senator Harris' seat? A Latino man. Can I tell you how I signed the petition to recall Governor Gavin Newsom faster than a MAGA refusing to wear a mask at Target? (While I live in Nevada, I signed it because it was the only way I knew to express my anger at what I saw as yet another Dem betrayal of Black voters and organizers.) How dare the very first thank-you to Black women be a fuck you to Black women?

And Biden's cabinet? Thanks for reminding us that white comes in dozens of shades while Black only comes in Housing and Urban Development. I mean seriously. Biden's first thought was to give us the projects when he nominated Ohio Congresswoman Marsha Fudge for HUD secretary. Not agriculture, which she wanted due to its oversight of the nation's food stamp program. (She would have been the first Black woman to head that department.)

I am the chairman of the Black Democratic Empowerment Project. How am I supposed to sell voting for Biden in the next election when the payoff is a giveaway to the ethnic man who belongs to the group the white consultocracy is replacing us with? No matter what role we play, the consultocracy will always take us for granted. Or when the spoils of war are handed out we get the projects and some dude we have never heard of at Defense (retired General Lloyd Austin III), which isn't exactly what we aspire to.

I will just say this. Biden better figure out quick what to reward Stacey Abrams.

And it better be good.

I just wanna be normal again. I want to go out to lunch
Biden and Harris need to solve this pandemic situation. I am not an essential worker. I am a Negro with a car payment. I do not work from home while baking four types of sourdough bread as I binge on Netflix from my Peloton. Oh, no. I make my living driving an Uber. Yep. About 12 hours a day. In Las Vegas! My limited T-cell ass does not have the privilege of self-quarantining. I get up at 3 a.m. every single day and say, "Not today, Rona, not today." I am Black, so me and vaccines have history. Can anyone say Tuskegee experiment? (Google is your best friend.)

But I will take a shot in the ass, arm, or nose if I can go sit in a theater for the next Madea movie or eat a bowl of grits at my favorite soul food restaurant again.

Commander Bone Spurs screwed up every single bit of this pandemic. And folks of color paid — and are paying — the price. If Biden fixes this in four years I will be like Barbra Streisand at the end of "The Way We Were" — all curly hair sporting a campaign sign while screaming, "VOTE FOR KAMALA!" I mean Biden.

Derek Washington is chairman of the Black Democratic Empowerment Project in Nevada. He's a longtime activist known for "flipping" former Nevada Senator John Ensign to cast the deciding vote to repeal "Don't Ask, Don't Tell" and is a 2016 Out magazine Out 100 honoree.