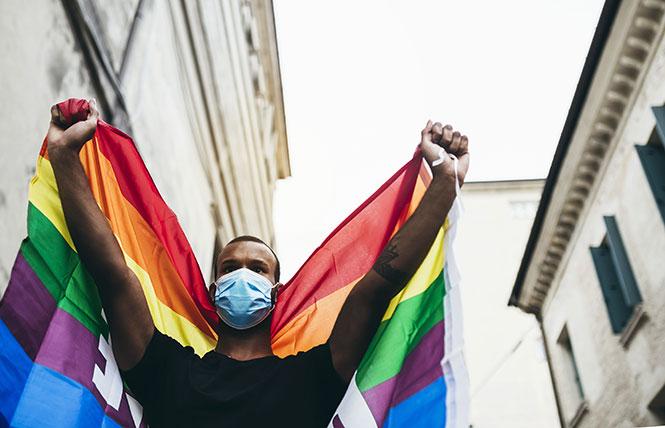 A masked demonstrator holds up a rainbow flag. Photo: AdobeStock

The new decade started jubilantly, but the light quickly went out shortly after 2020 began.

The novel coronavirus, which causes COVID-19, snuck up and crashed down in a destructive wave across the globe.

Scientists and researchers scrambled to learn about the virus, create tests, and find a vaccine to stop it in its tracks.

Travelers rushed to get home as borders closed. Lockdowns turned cities into ghost towns, and many LGBTQ people were isolated or trapped in dangerous family situations. Businesses that could went virtual, but other sectors crumbled, and frontline workers — from doctors to grocery clerks —stared an invisible enemy down. Millions of people lost their jobs and became dependent on the government and organizations to help them survive.

The virus claimed more than 1.7 million lives and sickened more than 82 million people worldwide by December 29, according to Worldometer.com.

LGBTQ people were among the most vulnerable but invisible victims. It is unclear how many LGBTQ lives have been lost to the virus. WHO and most governments are not specifically counting the community.

Global LGBTQ organizations directed the community's narrative of COVID-19's impact, issuing a number of reports throughout the year.

Queer voices grew louder, seeking to hold governments accountable and asking that LGBTQs be counted. (That has started to happen in California and San Francisco.)

Two viable vaccines were approved and began being distributed by the end of the year.

COVID-19 revealed the social unrest just beneath the surface of societies and not just because people spent months cooped up in their homes. Inequalities, privilege and poverty, racism, homophobia, transphobia, and anti-feminism all quickly jostled for center stage.

Black Lives Matter, the movement launched in Oakland by three Black women, two of whom identify as queer, went global in a big way after George Floyd, a Black Minneapolis man, was killed by police May 25.

President Donald Trump and others blamed China for the virus and promoted anti-Asian rhetoric.

Some government and religious leaders pointed their finger at the LGBTQ community as the cause of the pandemic.

Conservative governments in Hungary, Indonesia, Poland, and Uganda led the way, taking advantage of the pandemic-induced fear, lockdowns, and restrictions to attack LGBTQ and women's rights.

LGBTQ leaders feared the pandemic would cause major setbacks in the global LGBTQ movement as queer organizations struggled to support the community amid a wave of need, legal restrictions, and dwindling funds.

"They are really at risk of going under," Amie Bishop, a senior research adviser at OutRight Action International and author of "Vulnerability Amplified: The Impact of the COVID-19 Pandemic on LGBTIQ People," told the Bay Area Reporter in May. "That's what's so scary about this, as well as seeing the possibility of movements being set back by years potentially."

The pandemic year ended on a high note and revealed some surprises, but 2020 was a rough ride.

Under attack
The U.S. implemented homophobic foreign and immigration policies and took a conservative human rights policy to the United Nations.

Hungary and Poland blocked the European Union's $1.8 trillion budget, pushing back against the E.U.'s human rights policies, particularly LGBTQ rights. The package finally passed after a deal was made.

Ironically, the arrest was for violating Belgium's strict COVID-19 lockdown mandate, not to be mistaken for how anti-gay countries used pandemic restrictions to raid and arrest queer people.

Ugandan authorities arrested 20 LGBTQ youth at a shelter in March for allegedly violating pandemic restrictions. The youth were reportedly detained, humiliated, tortured, and denied their rights to care and legal counsel for nearly 50 days.

In a rare attempt at justice, the officers responsible for the arrest were summoned to court in August but the officers and the chief magistrate did not appear.

Lawyers representing the youth issued warrants and filed a criminal case against the two officers.

Fighting back
The global LGBTQ community showed resilience during the pandemic year and fought back against hate and the virus.

Despite their fear, Asian LGBTQ activists in the diaspora stood up to the anti-Asian racism that spread once headlines announced the virus originated in Wuhan, China.

Like many other queer communities they organized, provided virtual support, and sent money and aid back to communities in their home countries, the activists told the B.A.R.

Stories of LGBTQ community members going to great lengths to deliver HIV medicines and other necessities to queer people in need emerged from China to Lebanon to Uganda.

LGBTQ activists around the world found support from the E.U., U.N., and the World Bank as well as groups such as Amnesty International; Human Rights Campaign; Human Rights Watch; Organization for Refuge, Asylum and Migration; and OutRight.

HRC partnered with 23 North American corporations that pledged to help resettled refugees assimilate into the workforce.

Hungarian and Polish queers fought back against anti-LGBTQ legislation; Italians pushed for hate crimes legislation; and Japanese queer activists launched a campaign for an equality law.

Political wins
The biggest wins were the U.S. election of President-elect Joe Biden and New Zealand's reelection of Prime Minister Jacinda Ardern for a second term.

Biden's election brought relief to LGBTQ people around the world. He vowed to restore Obama-era pro-LGBTQ laws and policies and roll back Trump-era attacks once his administration is in the White House.

More than 400 religious leaders around the world called for an end to discrimination and violence against LGBTQ people.

A Russian lesbian couple won a landmark case against the country from the committee of the Convention on the Elimination of Discrimination Against Women. The women sued the Russian government for negligence investigating and prosecuting a hate crime committed against them by two men in 2014.

Italy's inclusion of LGBTQ people in the country's hate crimes law progressed to the house of representatives for review.

Conversion therapy
Conversion therapy officially became the next battle with the U.N.'s call to end the widely debunked practice to change a person's sexual orientation and/or gender identity.

Legislation to ban the practice is pending in Canada.

A Malaysian court allowed a legal challenge to the country's law that criminalizes homosexuality to move forward.

Dominican churches disrupted a decriminalization case against the small Caribbean island country, putting it temporarily on hold for the second time.

Refugees and asylum seekers
LGBTQ refugees living in Kakuma Refugee Camp in Kenya demonstrated against ongoing attacks and lack of protection against COVID-19 but were tear gassed by security outside the U.N. High Commissioner for Refugees, which manages the camp.

Asylum seekers at the U.S.-Mexico border did not fare much better, with reports of increased violence and killings, particularly of transgender women.

Norway provided some hope to LGBTQ refugees by opening its borders and prioritizing resettlement for some queer refugees this year.

The Philippines dealt a harsh blow to transgender Filipinas this year when President Rodrigo Duterte pardoned and deported ex-U.S. Marine Joseph Scott Pemberton, who was convicted in the 2014 murder of Jennifer Laude, a transgender woman.

IACHR found Peru responsible for torture of Azul Rojas Marin, who was arbitrarily detained and raped in 2008. The court ordered Peru to pay Marin unspecified damages.

In El Salvador, three former police officers were sentenced to 20 years each in prison for the killing of 29-year-old Camila Diaz Cordova.

The Dutch government decided to offer reparations to its transgender citizens who suffered under The Netherlands' Transgender Act.

Bermuda and the Cayman Islands same-sex marriage cases are set to be heard by the Judicial Committee of the Privy Council, the highest court for British Overseas Territories, in London in 2021.

In the meantime, the Cayman Islands legalized civil unions.

Barbados plans to put same-sex marriage on the ballot soon.

Switzerland passed same-sex marriage. The issue will go to a referendum next year, but Swiss lawmakers expressed confidence it will secure popular support, Reuters reported.

The Chilean constitutional court denied a lesbian couple's case to have their marriage in Spain recognized while the country's same-sex marriage bill remains stalled in congress.

Pride
Many Pride celebrations around the world went virtual due to the pandemic.

Taiwan was one of the few countries that hosted a downsized Pride celebration due to the country's success controlling COVID-19.