Out in the Bay: Rapper Mahawam speaks on power, beauty, and sex 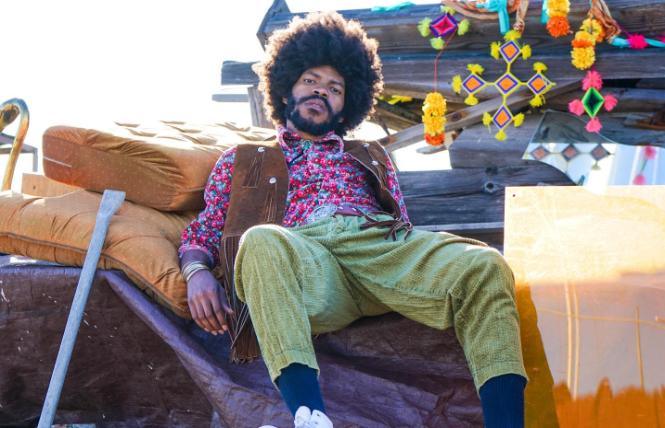 Queer Oakland rapper Mahawam spoke with Out in the Bay about their life and music projects. Photo: Courtesy Mahawam/Malik Mays

Musician Malik Mayes, better known as rapper Mahawam, grew up between Arizona and Texas with a single mother. In their early 20s, Mahawam settled in Oakland where they've lived since 2013. Like many in the Bay Area, Mahawam shares space with six other people, including their partner.

There's a chicken coop in the backyard and a garden where Mahawam is growing mugwort. "I got it because I wanted to try to be a psychonaut and kick up my dreamspace another level," they said on this week's Out in The Bay radio show and podcast. "It's supposed to induce vivid dreams if you make a tea of it but I read up on it a little bit more and apparently ingesting large enough quantities can be dangerous."

Before the pandemic, Mahawam bartended at Eli's in Oakland but since the health crisis is far from over, going back into the service industry isn't worth it, they noted. "I'm not technically immunocompromised because I'm HIV-positive, undetectable," they said, "but I am still immunocompromised."

As the pandemic continues and the general public's fury over injustice and inequity wanes, Mahawam says the long arc of history is too great. "The gays will stop fighting because no one is trying to take away their right to get married anymore," they said. "We've seen this before."

The intersection in which Mahawam lives their life means that their work "will inherently be political," but it's important that they "get to be an artist and an activist, not an art activist all the time."

Although Mahawam "also just wants to be a dope rapper," their work is still "about resilience, it's about power, it's about beauty, it's about sex," they said. "I want to talk about all of those things and I don't want to be afraid or ashamed in talking about them if I think it's important that people hear."

Mahawam is working on another musical project, operating from a less autobiographical space; their "primary artistic goal is trying to bring a little more raucous party energy to my music," they said. "A little more of an organic sheen as opposed to a hard digital veneer."

Hear more from Mahawam on this week's Out in the Bay-Queer Radio from San Francisco. The program re-airs at 9:30 a.m. Saturday, December 26, on KSFP Radio, 102.5 FM in San Francisco only, and is available anytime on Out in the Bay's website. Out in the Bay also airs 10 p.m. Tuesdays on KALW, 91.7 FM throughout the central Bay Area.

Truc Nguyen is a producer of Out in the Bay-Queer Radio from San Francisco. Learn more and listen at https://www.outinthebay.org/