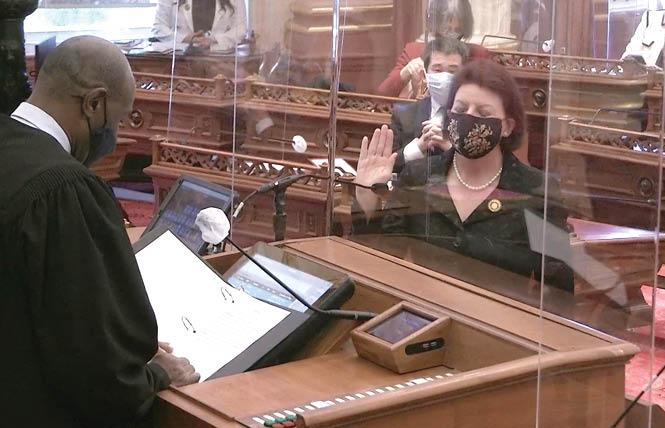 At age 70, gay state Senator John Laird (D-Santa Cruz) became the oldest out member of the Legislative LGBTQ Caucus Monday when he took his oath of office inside a sparsely attended Senate chamber. Standing next to him at a safe distance and also wearing a facemask was lesbian state Senator Susan Talamantes Eggman (D-Stockton), now the first out woman of color to serve in the Legislature's upper chamber.

Down the street at the Golden 1 Center, 25-year-old Assemblyman Alex Lee (D-San Jose) became the youngest member ever of the affinity group for out lawmakers and its first bisexual member. He is the youngest state lawmaker since 1938 and the first state legislator from Generation Z.

"While I'm bummed my friends, family, and supporters cannot witness and celebrate this momentous occasion together in person, it gives me a lot more comfort to know you all can be watching from the safety and comfort of home during this pandemic," wrote Lee in an emailed invite to watch his taking his oath of office, administered by the clerk of the Assembly. "Make no mistake: this coming legislative year is more important than ever. We must confront the pandemic, the climate crisis, the housing crisis, and the influence of corporate special interest money with urgency. We can't afford another year of inaction."

Lee and gay Assemblyman Chris Ward (D-San Diego) join returning gay Assemblyman Evan Low (D-Campbell) and lesbian Assemblywoman Sabrina Cervantes (D-Corona) in the Legislature's lower chamber. Low announced Monday that he was elected to a two-year term as chair of the LGBTQ caucus, while Eggman will serve as vice chair.

"We have seen firsthand how the federal government has abdicated its responsibilities in dealing with the pandemic, but California has never waited for permission to take the lead," stated Low, who previously served as caucus chair from 2017-2018. "As we move closer toward a vaccine, the pandemic will remain the caucus' top priority as we seek to protect LGBTQ residents' health and prosperity."

Eggman and Laird are both former state Assembly members who will now be serving alongside gay state Senator Scott Wiener (D-San Francisco) and Senate President pro Tempore Toni Atkins (D-San Diego). She was easily reelected as the chamber's leader and took her oath of office administered by recently seated California Supreme Court Justice Martin Jenkins, the first out gay man on the bench.

He also sworn in the senators, telling them their "secret weapon" is the rule of law, something made clear to him when he served as a federal judge.

"It is our north star that leads us safely home," said Jenkins.

Just as the lawmakers' constituents have been delaying various "important life events" from weddings to graduations due to the COVID-19 pandemic, noted Atkins, "We will take a pass on the pomp and circumstance we normally enjoy."

Laird, who read the Senate chaplain's prayer on her behalf since she was unable to make it in person, noted in a Facebook post later in the day that "it was moving to actually be sworn in - we were socially distanced, and I missed having John and my family present due to the restrictions."

Atkins said the Senate's top priority when it reconvenes January 4 will be addressing the various crises brought on by the health crisis. Topping the list will be affordable housing, support for small business, and addressing systemic racism.

Wiener also highlighted the numerous challenges the state is facing in a statement ahead of his taking his oath of office for a second term.

"I do not take this responsibility lightly: We're in the midst of one of the most challenging times California has ever faced, with COVID-19 cases surging and so many experiencing unemployment and staring down the possibility of eviction or foreclosure in the near future," stated Wiener. "Our priority needs to be helping struggling Californians, including working families, those without stable housing or at risk of losing their housing, and people struggling with food security, mental health, addiction, and other severe challenges."

With the proceeding occurring on the 79th anniversary of the Japanese attack on Pearl Harbor in Hawaii, Atkins noted that the Senate now has seven veterans among its ranks. It is "the highest number in decades," she added. One of them is Eggman, who served in the Army.

"There's no question we've made great progress here in California, but there is still so much work that simply cannot wait when lives are on the line," stated Eggman about becoming vice chair of the LGBTQ caucus, which she had previously led as its chair for the 2016-2017 legislative session.

Recalling how Americans "made do" during World War II in sacrifice to the country's war efforts, Atkins said Californians should easily be able to handle the safety precautions they are being asked to take today in order to deflate transmission of the coronavirus. In addition to wearing face coverings in public and avoiding large gatherings, much of the Golden State is again under stay-at-home orders and many businesses and entertainment venues are once again closed.

"It is not a lot for Californians to be asked that we do everything we can to eradicate this threat to our communities, loved ones, small business, and economy," she said. "We will meet these tough times with the same courage, sacrifice, and determination Californians have displayed in previous tough times."

In a moment of levity, Atkins also quipped that she and her spouse wish the state's residents a happy holiday season and "a boring 2021."