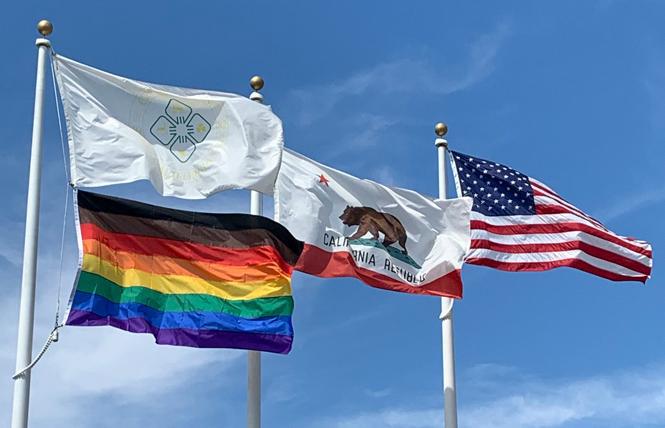 The Dublin City Council this year raised the Philly version of the rainbow flag during Pride Month in June. Photo: Courtesy Shawn Kumagai

GLAAD recently reported in its 2020 Accelerating Acceptance Study that a majority of Americans, both LGBTQ and non-LGBTQ, believe that LGBTQ people are mostly protected by federal laws — when, in fact, they are not. While it's unsurprising that non-LGBTQ people hold that view, it's striking and alarming that so many in our own community are not aware of how few federal protections we have.

GLAAD President and CEO Sarah Kate Ellis noted that despite landmark Supreme Court decisions like 2015's Obergefell v. Hodges, which legalized same-sex marriage nationwide, and an expansion of non-discrimination employment protections resulting from this year's Bostock v. Clayton County ruling, there continues to be a lack of awareness about our legal protections. "The findings of this year's Accelerating Acceptance Study highlight a dangerous reality: a significant majority of Americans, even within our own community, are not aware that LGBTQ people are not federally protected from discrimination in many areas of life," she stated.

It didn't help that LGBTQ issues were absent from this year's presidential race, a missed opportunity to discuss cases moving through the courts that will affect the LGBTQ community. That's especially important given that the Supreme Court now has a solid 6-3 conservative majority, with the seating of Justice Amy Coney Barrett. But this new reality demonstrates that the LGBTQ community must look beyond the courts for equality. That means pushing for LGBTQ non-discrimination laws in states that don't yet have them, particularly regarding trans students and public accommodations. It's also a reason why the Equality Act, currently languishing in the Senate, is so important; yet it likely won't be voted on in that body, so we'll have to wait until a new Congress is installed next year and then start the whole process over again. Preliminary election results don't bode well for that prospect, as Democrats look unlikely to capture control of the U.S. Senate, a troublesome development.

GLAAD also asked respondents about their comfort level around LGBTQ people in several scenarios, such as having a queer doctor or seeing a co-worker's same-sex wedding picture. Strangely, the highest response — 39% of non-LGBTQ respondents — said they are or would be "very" or "somewhat" uncomfortable learning that their child has a lesson on LGBTQ history in school. That's distressing, given that California has a law mandating that students in public schools are taught about LGBTQs in history.

The bottom line is our equal rights aren't fully established just because we've achieved marriage equality and some workplace protections at the federal level. We need to be seen by non-LGBTQ people as deserving of equal rights just as they are. The queer community has a lot of work to do not only educating the general population, but our own people. That will take more time, more education, and more of us telling our stories, as so many did during the same-sex marriage fight. Research has shown that non-LGBTQ people are more supportive when they know someone who is queer. That means we must continue to stand proud and come out to our family, neighbors, and co-workers. GLAAD's new report is a sobering reminder that we have not achieved equality, though we're closer than ever before.