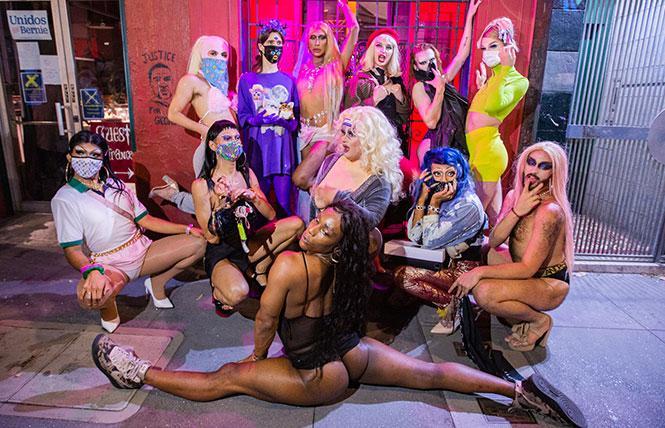 The landlords of a former hotel on Haight Street are disputing the claims of a collective of queer and trans people whose members currently live there, saying that the group is conducting a "hostile takeover" of the building.

For its part, the collective disagrees with the claims of the landlords.

As the Bay Area Reporter reported October 14, the Fishbowl Collective — which puts on an in-person weekly drag show from 1665 Haight Street — is raising money from the public and fear eviction after they received notice from their landlords, the District Commons nonprofit that owns Red Victorian LLC, from which Fishbowl members said they had obtained permission to live in the building in August after the COVID-19 pandemic left the building empty.

District 5 Supervisor Dean Preston came out in support of the collective in the B.A.R.

District Commons did not respond to a B.A.R. request for comment at the time of the original article, but stated October 26 that in August the Fishbowl Collective approached the organization to ask if it could host drag shows there.

"The Red Victorian has always supported both queer artists and public art, so it was thrilled to offer its event space to the group for these performances," District Commons stated.

"Regrettably, after the late-night shows ended, some of the performers and stage managers did not vacate the building as agreed. The group broke into the upstairs hotel and refused to leave when asked. They have since wrongfully assumed the identity of the Red Victorian and generated fundraising campaigns, taking credit for the Red Victorian's community projects and advocacy work, in order to fraudulently raise money for themselves."

District Commons officials stated that the Fishbowl Collective is preventing the nonprofit from going forward with its own plans to house LGBTQ, Black, and Indigenous people of color.

"We totally support any groups who want to rent the 1665 space for housing queer BIPOC folks — this has been a dream of ours for a long time," Zarinah Agnew, the co-executive director of District Commons, stated in the news release. "Anyone who wants is welcome to submit a lease application to the property owners. We desperately want to see the building continue to be used in ways that foster justice. That's our goal and you can see that in the work we've done. Now, it's likely that this small group might end all our efforts."

"To name one specifically, Fishbowl performers and stage managers did not 'break into the upstairs hotel following a late-night performance.' Additionally, the money we are raising is independent from the Red Vic's community projects and advocacy work, which is distinctly separate from our mission of providing low income and subsidized QTBIPOC housing," the Fishbowl Collective statement reads. "Our fundraising directly finances our current project, pays all building utilities, and will support future project expenses. We maintain we are tenants with rights."

Michael Thurin, a genderqueer femme performance artist from the East Bay who now lives at the Red Vic, told the B.A.R. October 27 that the collective did not hear of the detainer action until the news release was sent to the collective.

Thurin also stated that "there is a 'Shared Agreement' document created by Agnew which, beginning August 1, 2020, gives permission to our collective to stay at the building." This has not been provided to the B.A.R. as of press time.

The collective's attorney, James Millar, did not respond to a request for comment as of press time. Neither has Preston, when sent District Commons' allegations.