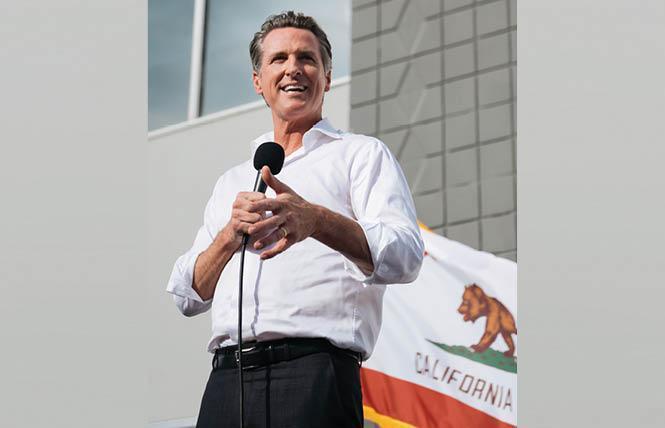 Despite an unprecedented two-month break in this year's legislative session, a $54 billion budget deficit, and death threats, California lawmakers sent several LGBTQ equality measures to Governor Gavin Newsom for approval. He signed most of them into laws that take effect January 1.

They include a mandate to collect sexual orientation and gender identity of COVID-19 patients, a measure ending discrimination against queer young people for consensual under-age sex, and a bill requiring state prisons to house transgender, gender-nonconforming and intersex people according to their gender identity or perception of personal safety.

"The argument is that if you don't have the data, you don't know what's going on," explained Bajko, a gay man. "It hampers legislators' and policymakers' ability to direct funding or resources to cover health crises within our community."

This law went into effect upon Newsom's signature September 26. It requires collection of sexual orientation and gender identity data for all reportable communicable diseases.

SB 132, also authored by Wiener, requires the California Department of Corrections and Rehabilitation to house transgender, gender-nonconforming and intersex inmates according to the gender by which they identify or their own perception of safety.

Currently, they are housed according to the sex they were assigned at birth, increasing the risk of violence for transgender people while incarcerated, particularly transgender women.

It is a "very horrific environment that they are put into," said Bajko, "with, until now, really no way to get out of."

The most controversial of California's new pro-equality laws aims to end discrimination against LGBTQ+ young adults by ensuring they are treated the same as others when engaging in consensual sex with a minor. Current law requires, for example, that an 18-year-old male who has sex with a 17-year-old male be placed on the state's sex offender registry, but not if his younger partner were female.

SB 145 author Wiener received death threats and other harassment from QAnon followers after the bill received national attention with false claims that the bill would legalize pedophilia.

The new law, taking effect January 1, gives judges discretion. If the relationship is predatory, Bajko explained, the perpetrator "can still be forced to register as a sex offender. But this takes out the automatic derailment of gay and lesbian young peoples' lives."

Hear more from Bajko on California's new LGBTQ+ protections on this week's Out in the Bay-Queer Radio from San Francisco. The program will re-air at 9:30 a.m., Saturday, October 31, on KSFP Radio, 102.5 FM in San Francisco only, and is available anytime on Out in the Bay's website.

Kendra Klang is a producer at Out in the Bay-Queer Radio from San Francisco. Learn more and listen at https://www.outinthebay.org/>