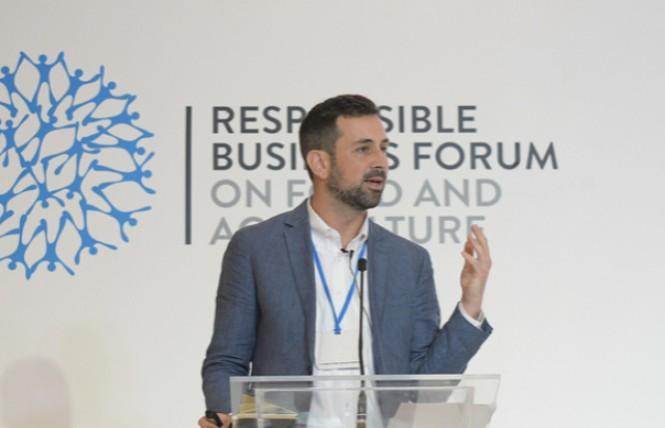 David Ball is the manager of Headstream, which is accepting applications for its Accelerator 2 program. Photo: Courtesy SecondMuse

Headstream, a San Francisco-based tech incubation project of SecondMuse, an impact and innovation company, is conducting its second Accelerator program, which will give grants to entrepreneurs with innovative ideas about how to improve youth digital experience — with a special emphasis on LGBTQs and other minority groups.

Accelerator 2 will be accepting online applications here through November 6.

"There is a pool of funding. They'll each get up to $30,000 after we make the selection," David Ball, a straight ally who is a manager at Headstream, told the Bay Area Reporter in a recent interview. "This has opened the types of capital and innovation we need. It has allowed us to put youth-centered solutions and impact-centered solutions at the forefront of our work and has allowed us to work more closely with young people than before."

Ball said Headstream is looking for ideas that make the digital and social media world a better and more representative place.

"We lead with serving communities — particularly LGBTQI communities, Black, Latinx and Indigenous people of color — centered around those consumers," Ball said. "We want to do something specifically for those communities, and those users, and bring in entrepreneurs who don't have the traditional access. ... SecondMuse believes in using innovation as a driver for social and environmental change and we wanted to create an economy based on the well-being of young people."

The first accelerator began at the start of this year, Ball said, and concluded in September. Ideas that received funding from that include 2Swim, a social networking platform for LGBTQ and Black and Indigenous youth of color, and Live for Tomorrow, an online suicide prevention tool that initiates online conversations.

As this column previously reported, suicide prevention resources have been increasingly overwhelmed in this year of pandemic, economic hardship and social strife. Suicide has long affected LGBTQ youth more than many other populations.

"I have done a lot of mental health promotional work on social media — using marketing for behavioral change — and I became cynical about my ability to make a difference using that method," Taylor said. "I came across a lot of young people pouring their lives out on there."

What moved Taylor to change, he said, was the story of Zander Mahaffey, a trans teenager from Austell, Georgia who killed himself five years ago at the age of 15 after posting a heartbreaking suicide note to Tumblr.

"It was about his experience of being trans, not being accepted," Taylor said. "These young people need a place they can belong and that's why we exist."

Purse became involved in the project about a year ago — "many COVID years ago" — after meeting another Live for Tomorrow co-founder.

"[Headstream] offered us [an award] of $35,000 U.S. and when you converted that to New Zealand dollars it gives us more leverage, so that's nice," Taylor said.

Added Purse: "One of the best things, besides finances, that it allowed us to reassess what we are doing, the products we are offering and the value in that so that we can be a bridge and provide specialized services."

Purse said a young gay person from Lebanon reached out because he was stressed he could not tell his family or friends about his sexual orientation. The legal status of homosexuality is ambiguous in the Mid-East country, though there is widespread discrimination and stigma.

Purse said it was "tricky, given the different language," but that she was able to find the young man a queer-affirming psychotherapist.

"We didn't know where a good space was for him," Purse said. "We check in every now and then."

Live for Tomorrow has plans to implement a filter tool for the LGBTQ community and to be available "to anyone who needs free help" the world over, Taylor said.