Election 2020: US Senate races worth careful attention as November nears

by analysis by Lisa Keen 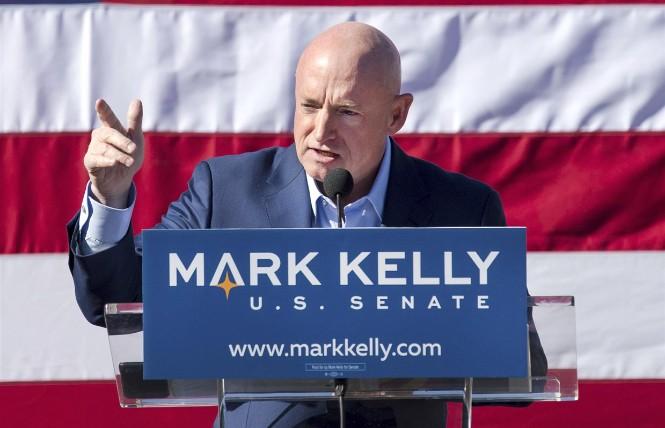 Former NASA astronaut Mark Kelly is ahead in his bid to unseat Senator Martha McSally in Arizona. Photo: Courtesy AP

Control of the U.S. Senate is almost as important to LGBTQ people this year as who wins the White House.

Under Republican control, the Senate has ignored bills to make schools safer for LGBTQ students or to stop discrimination against queer youth seeking child welfare services. While the Equality Act to prohibit discrimination based on sexual orientation and gender identity in employment, housing, and federally funded programs, has passed the House, it has languished in the Senate Judiciary Committee, without a hearing or a vote.

Under Republican control, the Senate has rubber-stamped President Donald Trump's nominations to every level of the federal court system, confirming people who have records of animosity to LGBTQ people.

"In nomination after nomination, [Trump's] picks for federal courts are hostile to civil rights in general and specifically hostile to LGBTQ rights," stated Lambda Legal Defense and Education Fund. Twenty-four judges have already been confirmed for appointment to the federal appeals courts and, by month's end, the Senate is expected to confirm Trump's third pick for the U.S. Supreme Court, conservative federal Judge Amy Coney Barrett.

And it warrants particular notice that the Senate, under Republican Majority Leader Mitch McConnell (Kentucky), openly flouted the majority's own rules governing nominations to deprive Democratic President Barack Obama of his choice of a Supreme Court nominee during the 2016 election year but insisted that Trump have one during the 2020 election.

Not every LGBTQ person or group has given up on the Republican Party. Charles T. Moran, managing director of the national Log Cabin Republicans, signed onto a letter supporting the nomination of Barrett to become a U.S. Supreme Court justice, even as every other national LGBTQ group opposed her confirmation. The national Log Cabin Republicans has not endorsed any U.S. Senate candidates yet this year, but its chapter in Illinois has endorsed Mark Curran Jr., the Republican challenger to incumbent Democratic Senator Dick Durbin. Log Cabin national also considers Senator Susan Collins (R-Maine) a strong ally, even while the Human Rights Campaign and Equality Maine have turned against her.

But on an even more practical level, having Democrats control the Senate and the House would create a line of defense against any number of schemes Trump might employ to declare himself the winner of the presidential race. It would also provide Congress with a realistic means of holding Trump accountable for any crimes he might commit, or has allegedly committed, against the nation. And it would improve the chances that any upcoming Supreme Court vacancy could be filled by nominees who have a commitment to equal rights for LGBTQ people.

So, what are the numbers and which are the states that could decide which party controls the Senate next session?

There are 35 Senate seats up for election November 3, but only 10 of them are contestable enough to warrant attention and funding by supporters of either party. Republicans seeking reelection currently hold nine of those 10; one (in Michigan) is a Democrat.

If Trump retains the White House, Democrats would need 51 seats in order to take control of the Senate. They currently have 47, but polling indicates they will lose one of those seats (held by Alabama Senator Doug Jones). Senator Gary Peters, the Michigan Democrat, is also in a tough race for reelection. The latest poll shows Republican challenger John James with a 1.4% lead and only 2.5% of voters undecided. But an average of polls, calculated by RealClearPolitics, gives Peters a 4.9% edge.

If Jones and Peters lose, the Democrats would be down to 45 seats and need to take six Republican seats to take the Senate.

FiveThirtyEight.com, the website founded by gay statistics guru Nate Silver, calculated last week that Democrats have a 73% chance of winning the Senate.

Senate races to watch
Here are the races where Senate seats have the best chance to flip from Republican to Democrat:

Arizona: Democrat Mark Kelly, husband of former Arizona Congresswoman Gabby Giffords (D), is running to replace first-term Republican Martha McSally. HRC endorsed Kelly, saying he has been a "steadfast ally." McSally's score on LGBTQ issues has rated a zero from HRC. An average of recent polls, calculated by RealClearPolitics.com, shows Kelly with an 8.3% lead, as of October 16.

Georgia: Both Senate seats are up this year. Democrat Jon Ossoff, a media owner and journalist, is running for a full term. He almost won a House seat from Georgia two years ago. Ossoff had HRC's endorsement then and now and he and special election Senate candidate Raphael Warnock (see below) have both earned gay former presidential contender Pete Buttigieg's endorsement. Ossoff is hoping to unseat Republican incumbent David Perdue, who has a zero score from HRC. RealClearPolitics' average of polls shows Perdue ahead by only one point as of October 12.

Warnock, running in the special election, is the personal pastor of lesbian Georgia state Representative Park Cannon, who has endorsed him, as has HRC. While having "evolved" on issues such as same-sex marriage, he has welcomed LGBTQ people and promised leaders to passionately argue against anyone trying to use religion to discriminate. The Republican incumbent, Kelly Loeffler, has not been in the Senate long enough to obtain a score from HRC, but she recently introduced legislation to limit Title IX protection on sex discrimination in educational sports "based solely on a person's reproductive biology and genetics at birth." RealClearPolitics' calculation shows Warnock leads by 7.7 points as of October 12.

Iowa: Democrat Theresa Greenfield, a real estate executive, has been consistently polling three to five points ahead of incumbent Republican Joni Ernst in recent weeks, but the undecided votes are running about 10%. She's got the support of HRC and Buttigieg, and Ernst's HRC score is a zero. Two early October polls showed Greenfield up by four points, but with a margin of error of 3.5 points.

Maine: Democrat Sara Gideon, speaker of the Maine House, might once have been considered a long-shot to unseat longtime incumbent Susan Collins, who was once seen by many in the LGBTQ community as among the few allies on the Republican side. But then Collins voted for Trump Supreme Court nominee Brett Kavanaugh, whom HRC characterized as a "dangerous, unqualified nominee." Collins' impassioned floor speech and vote for Kavanaugh and repeated willingness to stay in lock step with McConnell has rendered Collins' reelection "simply untenable," said HRC President Alphonso David. On the other side of the aisle, Log Cabin Republicans is announcing its endorsement of Collins this week. RealClearPolitics' averaging of polls shows Gideon up by 4.2 points in early October.

Montana: Democrat Steve Bullock, current governor of the state, has seen a recent surge in support, from nine points down October 7 to a tie October 10. As governor, Bullock signed an executive order prohibiting discrimination against LGBTQ state employees and supported the U.S. Supreme Court decision to strike state bans on marriage for same-sex couples. HRC has endorsed Bullock, and scored Republican incumbent Steve Daines a zero.

North Carolina: Democrat Cal Cunningham appeared to be running away with the election in his bid to unseat incumbent Republican Thom Tillis. Then news broke that he had been engaging in sexting with a woman other than his wife, and his polls slipped. But FiveThirtyEight.com reported last week that Cunningham appears to have survived the scandal. Recent New York Times polling shows him with a one-point lead but RealClearPolitics' average of polls shows him with a 4.3-point lead. HRC and Buttigieg have both endorsed Cunningham.