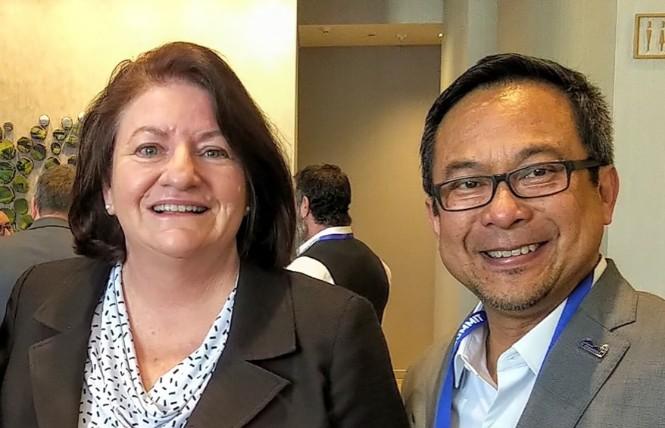 A gay Filipino East Bay city councilman is the new head of a statewide caucus for local LGBTQ leaders, which is looking to expand its membership ranks following the November 3 election.

El Cerrito City Councilman Gabriel Quinto, elected in 2018 to a second four-year term, is the new president of the League of California Cities' LGBTQ Caucus. He had been serving as the group's vice president and was elected to its top leadership position October 8.

"I want to make sure our elected officials from our community have every opportunity to excel as an elected official," Quinto said in a phone interview with the Bay Area Reporter. "Our caucus will be a part of that to make sure they get proper training and assistance to join boards and commissions locally and regionally as well."

Serving as vice president is gay Tracy City Councilman Dan Arriola, who is seeking to be elected next month as mayor of the San Joaquin County municipality. Arriola, who had been serving as secretary, is the caucus' first LGBTQ board member from the Central Valley. Formed in 2006, the caucus became the fifth such group within the league: one is for women and the other three are race-based.

Quinto succeeded bisexual Menlo Park City Councilwoman Catherine Carlton. According to an online database of local queer officials compiled by the LGBTQ Victory Institute, Carlton is the lone out Republican officeholder in the Bay Area.

Twice elected at-large, she will be leaving the council at the end of this year. She opted not to run for reelection this November as the Peninsula city completes its move to electing council members by district.

In 2014, Quinto became the first LGBTQ person to serve on the El Cerrito City Council. His election also marked the first time a person living with HIV had won public office in the Bay Area.

Quinto also was his city's first LGBTQ and first Filipino mayor; the position rotates among the council members. He is also the first known HIV-positive mayor in the region, and only the second out mayor to serve in Contra Costa County.

For the past year, Quinto had served as president of the League of California Cities' caucus for Asian and Pacific Islander local leaders. He told the B.A.R. his holding such leadership positions as an out elected leader of a smaller city in the Golden State carries its own significance.

"From a small city perspective like El Cerrito, this is big. This shows our community is not just in cities you hear about — like San Francisco, Oakland, Los Angeles, West Hollywood — we are everywhere," said Quinto, noting that the league welcomes leaders from both sides of the political aisle. "This is nonpartisan; we have Republicans and Democrats. In my opinion, we need to have our community on both sides represented."

The caucus sponsors various events around the state to highlight LGBTQ issues. It published last year, for example, a guide for how municipalities can assist their employees who transition their gender identities.

Anyone can download the 64-page document. It includes everything from how to upgrade local ordinances to how to educate city staff about trans issues. A new edition using gender-neutral pronouns should be published soon.

"It is good for all kinds of businesses in the communities also. It addresses all kinds of questions, like how to get other team members on board," said Kathy Val, whose adult daughter is a lesbian and has served as a consultant to the LGBTQ caucus since 2016.

The League serves as the lobbyist for small and medium-size cities in the state, explained Quinto, and presses state lawmakers and others on a host of concerns that LGBTQ elected leaders must contend with, from addressing transit needs and affordable housing to the impacts of climate change. It also has a number of committees focused on specific policy areas.

"You will see people from our community play important roles in the future of California, " said Quinto, who hopes to remain a member of the environmental policy committee.

"I am grateful these policy committees welcome more diversity and this is how we get diversity into many of these," said Quinto. "I want to make sure our people of color and LGBTQ communities are included."

Quinto hopes to grow the LGBTQ caucus' membership ranks, which currently stands at 30 people. With a record number of out candidates running this year — just in the Bay Area region alone there are nearly 60 known LGBTQ people seeking elected positions on the fall ballot — it shouldn't be that hard to see the caucus double in size during his 12-month term as president.

"We will reach out and help our new council members who have been recently elected. I know we will have a lot of them," said Quinto. "We have been doubling in size every election year. We will definitely have more after November 3."

Elected and appointed LGBTQ leaders throughout the state can join the caucus as an active member by paying a yearly fee of $50. Anyone who supports the caucus and its mission can become an associate member, which costs $70, while outside groups can also become sponsors of the caucus and its events.

Just one of the current caucus members is an associate member. Only LGBTQ active members can serve on its board, said Quinto, who noted the group strives to have geographically diverse executive committee.

To learn more about the LGBTQ Caucus or to join it, visit its website.