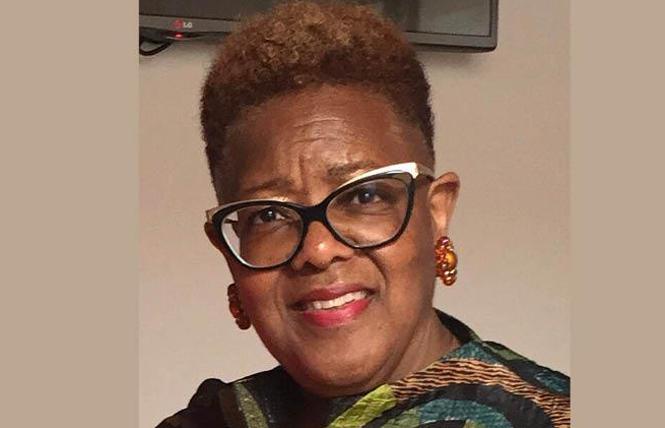 Governor Gavin Newsom has appointed a Black Oakland lesbian to a seat on the California Commission on Aging.

Brendalynn Goodall, 69, is a longtime LGBTQ activist, having served as president of the East Bay Stonewall Democratic Club.

In an email to the Bay Area Reporter, Goodall said she was "honored and excited" about the appointment.

"With over 30 years in the field of aging, I will have the opportunity to turn my passion into purpose," she stated. "I have been an advocate and voice for elders, people of color, and LGBTQ individuals on a state, local, and national level. Serving as a commissioner, I am confident that I will continue to make a positive impact."

In March, Goodall won her bid for reelection on the Alameda County Democratic Central Committee. Her new term on that body begins in January.

This state aging commission position does not require state Senate confirmation and there is no compensation. Goodall is a Democrat.

Every Friday, the paper will post an online item about the latest program in advance of its Saturday rebroadcast on KSFP Radio, 102.5 FM in San Francisco only, and online anytime at https://www.outinthebay.org/

The B.A.R. will also be contributing to the radio program monthly.

Eric Jansen, co-producer of Out in the Bay, said his team is pleased with the arrangement.

"I and my co-producers, Truc Nguyen and Kendra Klang, are thrilled about this new partnership with the Bay Area Reporter," Jansen stated. "Journalism that covers and serves specific communities is threatened financially all over the country. This partnership helps us reach a wider audience through the B.A.R.'s award-winning website and newspaper, and we hope to help the B.A.R. reach new readers through our podcasts and radio broadcasts."

B.A.R. publisher Michael Yamashita explained that the partnership would help both entities.

"We've been aware of Eric's long career in Bay Area broadcasting so it's exciting to finally collaborate with Out in the Bay to bring more quality content to our audiences by doing what we each do best, and in time extend our partnership to new projects," he stated.

"Raising LGBTQ Voices in the Media" is free.

Panelists will include Reggie Aqui, anchor of ABC7's "Morning in the SF Bay Area;" Jeffrey Masters, creator and host of LGBTQ&A, an interview podcast co-produced by the Advocate; Mark Segal, publisher of Philadelphia Gay News; Kim Severson, national food correspondent for the New York Times; and Kara Swisher, editor-at-large of New York Media, host of the Pivot podcast, and executive producer of the Code conference.

They will be talking about the importance of raising queer voices in the media. Liam Mayclem, TV personality of "Eye on the Bay," will moderate.

To reserve a ticket, go to https://bit.ly/33zRYpq

"Seen and Unseen: Queering Japanese American History Before 1945" will open Sunday, October 11, to coincide with National Coming Out Day. It is hosted by J-Sei and co-curated by Amy Sueyoshi and Stan Yogi.

A news release noted that the exhibit brings to light a hidden past when same-sex relationships and female impersonation were accepted parts of Japanese immigrant culture, and how queer Japanese Americans expressed themselves as the Nikkei community came to mirror white American fears of same-sex intimacy and gender nonconformity.

The exhibit will run until February 14 and includes several programs, which are free but require an RSVP to receive the Zoom link.

For more information, go to https://j-sei.org/seen-and-unseen

The women will receive the foundation's Making a Difference Award.

Tomlin and Wagner, who met in 1971, have used their platform to serve as advocates for equal rights and feminism throughout the decades, a news release from the foundation stated. The award recognizes individuals and organizations committed to replacing hate with understanding, compassion and acceptance.

Other honorees include Julie Chavez, who will receive the Dennis Dougherty Award for Community Leadership and Jude, a 13-year-old trans student who will accept the Spirit of Matthew Award. (Jude's last name is being withheld because she is a minor.)

The foundation was established in honor of Matthew Shepard, a gay man who was beaten, tortured, and left to die near Laramie, Wyoming in 1998. He did die six days later. His parents, Judy and Dennis Shepard, later started the foundation.

The foundation was involved with the country's first federal hate crimes legislation in 2009, which is named after Shepard and James Byrd Jr., a Black man who was dragged to his death in Texas. President Barack Obama signed the law.

Tickets for the gala are $20 and available at https://www.matthewshepard.org/gala/

Trevor Project CEO receives award
Trevor Project CEO Amit Paley recently received the 2020 One Mind Champion Award.
The announcement was made last month at One Mind's 26th annual music festival for brain health. One Mind is a leading mental health and brain research nonprofit. It raised over $3 million at the music festival, which was held virtually along with a scientific symposium in Rutherford in the Napa Valley.

The Trevor Project is a national nonprofit providing crisis intervention and suicide prevention services to LGBTQ young people under 25.

For more information about One Mind, visit http://www.onemind.org

Students in grades 5-12 can apply if they have made meaningful contributions to their communities through volunteering within the past 12 months — virtually or otherwise, according to a news release.

The top middle level and high school volunteer from each state and the District of Columbia will be named State Honorees in February. They will receive $1,000 scholarships, engraved silver medallions, and an invitation to the program's national recognition events in early May.

The awards are through Prudential Financial and the National Association of Secondary School Principals.

In May, the program will name America's top 10 youth volunteers of 2021. Those National Honorees will receive additional $5,000 scholarships, gold medallions, crystal trophies for their nominating schools or organizations, and $5,000 Prudential grants for nonprofit charitable organizations of their choice.

The Prudential Spirit of Community Awards was created in 1995 to recognize the exemplary volunteer work of middle level and high school students. Since then, awards have been granted to more than 140,000 middle and high school students across the country at the local, state, and national level. Spirit of Community programs are also conducted in Japan, Ireland, India, China, and Brazil, where Prudential has significant business operations.

For complete details on the program and the stories of California's top youth volunteers from years past, visit http://spirit.prudential.com

The deadline is November 10.