Andrew Gillum comes out as bisexual 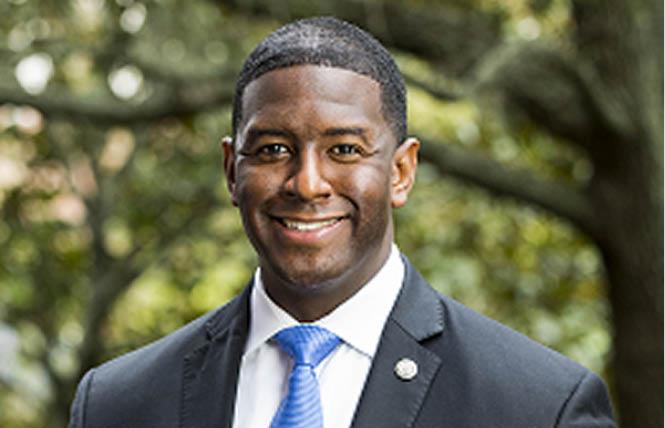 Andrew Gillum has come out as bisexual. Photo: Public domain

Andrew Gillum, a Florida Democrat who after a narrow loss in a 2018 gubernatorial run was engulfed in a scandal after being found in a hotel room with drugs and a male sex worker, has come out as bisexual.

Gillum, 41, made the announcement about his sexual orientation in an interview with journalist Tamron Hall that went online Monday, September 14.

"You didn't ask the question, you put it out there whether I identify as gay. The answer is I don't identify as gay but I do identify as bisexual," Gillum said. "And that is something that I've never shared publicly before."

In March, the Tallahassee Democrat reported Gillum was one of three men, one of whom was suffering from a drug overdose, found by police with "plastic baggies of suspected crystal meth" in a hotel room in Miami Beach, Florida.

The person who overdosed has been reported by numerous outlets as a gay male escort.

According to police reports, Gillum was found vomiting in the room too inebriated to speak with officers while another man was passed out.

At the time, Gillum denied using any drugs and said he had "too much to drink." Days later, Gillum said he would enter rehab, citing struggles after losing his race to now Florida Governor Ron DeSantis.

Alphonso David, president of the Human Rights Campaign, commended Gillum on Twitter for coming out, saying "coming out as bi+ looks different from every person."

"No matter the circumstances, all people deserve respect," David tweeted. "@AndrewGillum sharing his story will no doubt help others who may be struggling with coming out on their own terms."

Gillum, who was known for supporting LGBTQ rights before coming out, is married to his wife, R. Jai Gillum, and previously was mayor of Tallahassee.

"Black members of the LGBTQ+ community across the country watched Andrew Gillum's interview with Tamron Hall today with empathy and love, as so many of us can relate to the complex issues and feelings he conveyed," Johns said. "I applaud Gillum's willingness to be vulnerable about his struggles and journey on national television, and deeply appreciate the raw emotion he conveyed in his conversation with Hall alongside his wife, R. Jai."