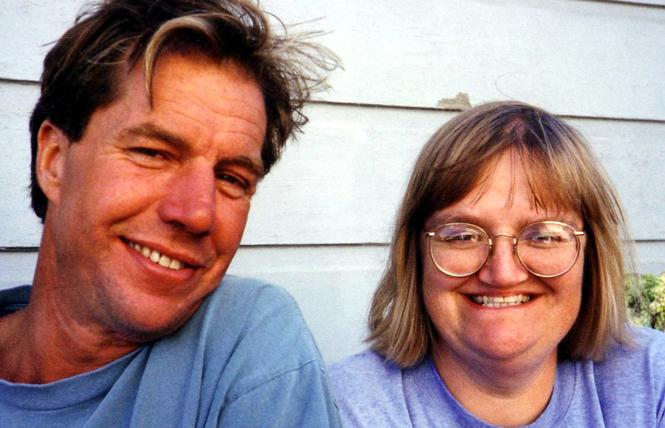 Ms. Hall, a straight ally, worked on behalf of patients and their families for four decades, from the outbreak of AIDS to the COVID-19 pandemic.

The Family Link is a nonprofit guesthouse serving families who come to San Francisco to visit and care for loved ones with a life-threatening illness or traumatic injury.

Ms. Hall and a small group of Anglican sisters emigrated from England to San Francisco in 1974 and established the American Province of the Community of St. Francis, or CSF.

According to her obituary, by 1982, when the acronym AIDS was first applied to a mysterious illness that primarily affected gay men, AIDS service organizations were being formed in the city to address diverse needs of the growing epidemic. Ms. Hall was already busy filling a niche that would become her life's work.

Then a volunteer at the Shanti Project, Ms. Hall realized that many people who came to San Francisco to care for ill loved ones had nowhere to stay. In 1981, she arranged a room for a relative visiting a Shanti client. By 1985, she had rented an apartment, recruited a board of directors, obtained nonprofit status, and was networking with hospital and hospice social workers to identify unhoused guests.

She worked closely with the LGBTQ community, and many Family Link board members over the years have been gay, noted Denis Wade, a man who's a longtime volunteer for the agency and a former board member.

To avoid competing for scarce funds that could otherwise go to medical care, she insisted on never seeking or accepting government funding, a policy that continues today at the Family Link. Dedicated volunteers and donors have enabled the nondenominational agency to survive. Ms. Hall was the only full-time employee, and the agency had a part-time assistant and housecleaner. The Family Link's annual budget is under $200,000, Wade said.

Wade wrote in an email that Ms. Hall did much outreach to the LGBTQ community. She rode in the agency's float in the 1993 San Francisco Pride parade. The Family Link has participated in the AIDS Walk and has been involved in the Castro Street Fair since the 1990s.

In 1995, the Family Link moved into its own building at 317 Castro Street. Ms. Hall had obtained a contractor's license, and she worked with contractor Jim Spotts, a board member, on repairs that turned two dilapidated Edwardian flats into a warm family home.

The organization continues to serve visitors who come to San Francisco to visit and care for loved ones with life-threatening illnesses or injuries. Ms. Hall was there 24/7, making sure the guests were fed, comforted, and cared for.

Her successor as program director is Shabnam Gul, a Pakistani American educator who had worked with Ms. Hall since she first came to the Family Link with her infant daughter in 2001 during a family medical crisis.

"Sister Ruth was all love, all kindness," Gul stated in an email. "The help she gave our family changed our lives. We will always keep her dream alive at the Family Link.

"My daughters insisted that I take this job. We want to make sure that Ruth's legacy continues," Gul added.

Ms. Hall is survived by her brother and sister-in-law, Steve and Jean Hall, of County Durham, England, and her CSF sisters Jean Lait, Maggie Simpson, and Pamela Clare Magers.

A memorial is planned for St. Francis Episcopal Church in San Francisco at a date to be announced.

Donations can be made to the Family Link, 317 Castro Street, San Francisco, CA 94114. For more information, visit http://www.thefamilylink.com