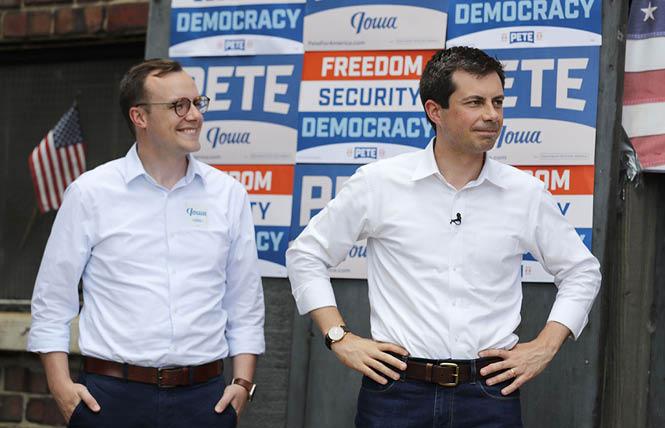 Chasten and Pete Buttigieg will receive the Trailblazer Award from Equality California at its virtual fundraiser next month. Photo: Courtesy AP

Its normal schedule of high-priced fundraising dinners in cities around the state upended by the novel coronavirus outbreak, LGBTQ rights organization Equality California is pivoting to holding one star-studded statewide awards ceremony this fall.

The first-ever statewide "Golden State Equality Awards" virtual celebration will be held at 6 p.m. Sunday, September 13, and feature "Pose" star, actress and advocate Angelica Ross as host. Among the honorees will be Netflix's groundbreaking documentary "Disclosure," about transgender representation in film, and husbands Pete and Chasten Buttigieg.

The former mayor of South Bend, Indiana who had sought to be the Democratic presidential nominee this year, and his husband, respectively, will receive the Equality Trailblazer Award. House Speaker Nancy Pelosi (D-San Francisco) will posthumously honor the late Georgia congressman John Lewis, the civil rights icon who was a vocal supporter of the LGBTQ community.

"Over the past year, Pete and Chasten Buttigieg have transformed American politics forever. Netflix's groundbreaking documentary 'Disclosure' shed much-needed light on the power of transgender representation in film and television," stated EQCA Executive Director Rick Chavez Zbur in announcing the plans for the virtual celebration. "And we lost a true giant — and an unwavering ally — in Congressman John Lewis, whose life and legacy we are proud to honor with a tribute from Speaker Pelosi."

As the Bay Area Reporter first reported in March, EQCA had initially postponed two of its planned big fundraising galas in the spring, in Sacramento and San Francisco, due to the pandemic. The San Francisco event at the time had been pushed back to September 11 and was to be held at a hotel in atop the city's Nob Hill.

And EQCA was still hopeful it would be able to hold the awards dinners in San Diego (June 5), Los Angeles (September 26) and Palm Springs (October 17). But with the state unable to control transmission of the virus, those plans had to be scrapped.

"2020 has challenged the LGBTQ+ community in ways we could never have imagined, but challenging times create heroes, and we cannot wait to come together virtually and celebrate some of this year's heroes," stated Zbur. "The Equality Awards are a critical opportunity for members of our community to honor the leaders and organizations whose selfless work helps to advance LGBTQ+ civil rights and social justice."

There will still be a local aspect to the event, as EQCA will be hosting regional pre-show cocktail hours to honor local individuals in Sacramento, San Francisco, San Diego, Los Angeles, and Palm Springs. In the Bay Area, former San Francisco supervisor and assemblywoman Fiona Ma, now the state's treasurer, and gay Assemblyman Evan Low (D-Campbell) will be honored. In Sacramento trans advocate Evan Minton, who is the plaintiff in a landmark lawsuit against a Catholic healthcare provider that denied him medical care, will be honored by EQCA.

Additional honorees and special guests will be announced in the coming weeks. Tickets to gain access to the private website where the event will be livestreamed, which begin at $100 for individuals, can be purchased online at http://www.eqca.org/equality-awards