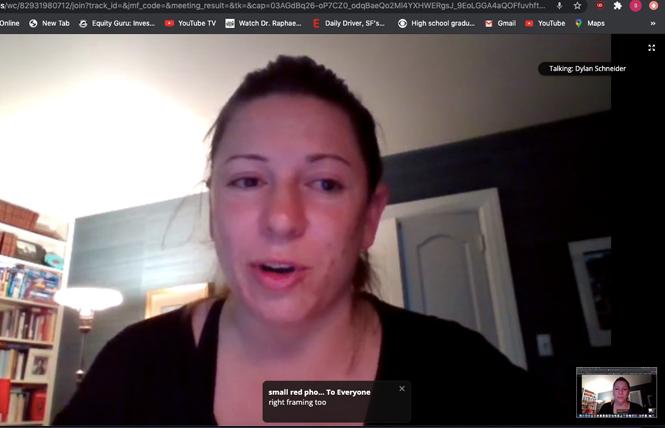 Dylan Schneider, acting director of strategy and external affairs at the San Francisco Department of Homelessness and Supportive Housing, spoke during the virtual meeting of the Duboce Triangle Neighborhood Association. Photo: Screengrab via Zoom

At a July 27 virtual meeting of the Duboce Triangle Neighborhood Association, the idea for the new program was introduced by Mary Ellen Carroll, executive director of the Department of Emergency Management.

Speaking to some 80 people who tuned into the Zoom meeting, Carroll conceded that an effort to deal with tent encampments in the city "came to a standstill" after shelter in place was mandated due to the coronavirus pandemic. That, she said, hobbled an ability to help people in the encampments as well as respond to neighborhood complaints about unhealthy conditions on the streets.

Dylan Schneider, acting director of strategy and external affairs at the San Francisco Department of Homelessness and Supportive Housing, said the onset of COVID-19 multiplied an already serious situation. The city lost 50% of its shelter spaces, while the number of people needing housing increased as couch surfing ended for many people previously depending on friends and relatives. The city's goal is "healthy streets for everyone ... housed and unhoused," she said.

Carroll said she believes the city now "has the resources to go out and begin our work."

Current problems in Duboce Triangle, which is adjacent to the Castro, began about the same time COVID-19 hit the city, bringing encampments to the small neighborhood. In the last few months, at least five encampments have been in the area in and around Duboce Triangle; among the largest is one on 16th Street near Market, across the street from the library, as well as two on the corner of 15th and Sanchez streets and one on Noe Street near CPMC Hospital.

"We were at a standstill for months," Carroll said, while the city designed and implemented programs to house people in hotels and safe sleeping sites, such as the one that was at Everett Middle School until recently.

As the Bay Area Reporter previously reported, while gay District 8 Supervisor Rafael Mandelman pushed for the Everett site, he said earlier this month at a meeting of the Castro Merchants group that the results of the program were mixed.

In what she called a "phase two" response to the city's homelessness crisis during COVID-19, Carroll said the city plans to have an "alternative housing system" that can be accessed more easily.

The city has focused its efforts to bring services to the Tenderloin, Mission, and Bayview neighborhoods as those were the areas of greatest need.

"Going forward, the city hopes to help other communities where encampments have settled, including several in Duboce," Carroll said.

Carroll envisions a public-private partnership, comprised of stakeholders and residents, to determine the priorities in a neighborhood.

"It will be an open process," she said.

She plans to work with staff from Mandelman's office but added, "Anyone is welcome to join us." Carroll plans to develop a "neighborhood-based tool that will allow the city to make an onsite assessment of a hot spot" and determine problems and "develop solutions or steps to mitigate" those issues, including services and housing for people who live on the street as well as help for residents who want healthier conditions.

"All tents won't disappear," she cautioned, "but we know every community has their own culture and issues. It's important to hear from residents and approach it together."

Mandelman said that four months ago, there were no encampments in the neighborhood so anything less than "a universe without tents might not be a success to some" people. But even "some mitigation would be good," he conceded.

"A question I hear a lot is if camping in residential neighborhoods is illegal," why isn't it easy to cite people breaking the law, said Pedrini.

But the city procedure requires police to attempt to get voluntary compliance and offer alternative shelter, which is currently unavailable, he said. "It is only after campers are warned, asked to leave, and offered housing that police can warm them and then issue a citation or an arrest when appropriate," he explained.

The city's public-private plan was greeted with cautious approval by some attending the meeting.

In response to a request from the B.A.R., Kimyn Braithwaite, president of DTNA, wrote in an email, "I think the meeting provided some good information for residents about how the city deals with homelessness. I don't know that that will alleviate any of their frustrations.

"The supervisor mentioned that he convenes a monthly meeting with the various city departments that deal with homelessness as well as reps from the neighborhood. I have been to those meetings and while I don't doubt the passion and commitment by city employees that are working to get people off the streets, it just doesn't seem like things on the street are changing much," she added. "And, of course, COVID-19 has just made it worse."

Braithwaite said she had just heard of the city's new neighborhood-focused approach the day of the meeting.

"We definitely plan to work with ... the Department of Emergency Management to deal with the encampments in our neighborhood," she wrote. "I hope it works or at least makes a measurable dent in the problem."

David Troup, a Duboce resident and former board member of DTNA, emphasized that he was speaking for himself, not DTNA, when he wrote in an email, "I think a big chunk, maybe a majority, of the new tent-dwellers do not want or need services, many of them are using and/or selling drugs and operating criminal theft and fencing operations. We need a big dose of tough love.

"I think Rafael is on the right track with major expansion of safe sleeping spaces, with enough capacity that we can compel their use. But we're a long way from that and I fear it may never happen with our current Board of Supervisors."