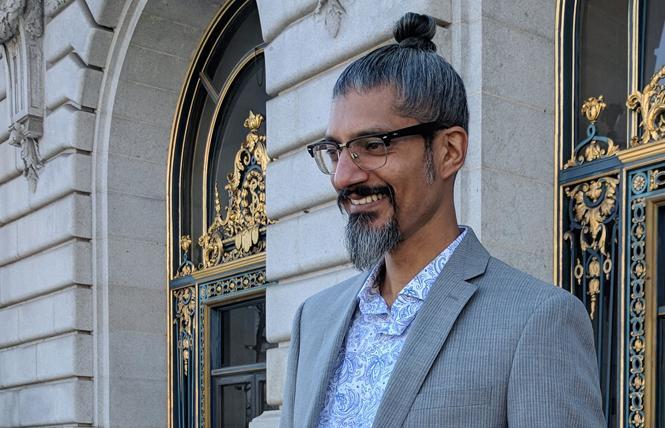 Progressive Shahid Buttar, an attorney and deejay who is challenging House Speaker Nancy Pelosi (D-San Francisco) for her seat on the November ballot, is facing charges of sexual harassment by a woman he knew in Washington, D.C. and of fostering a misogynistic atmosphere on his campaign that led roughly a dozen staffers to resign this spring.

The dual allegations have led the Democratic Socialists of America to consider rescinding its endorsement of Buttar, the Bay Area Reporter has learned. In an interview Tuesday, Buttar denied both of the accusations from the fellow activist and poet as well as from his former campaign personnel.

"I am as disturbed about the allegations as anyone. In particular the charges of toxic masculinity gravely concerns me. It bears no relationship to who I am or how I have conducted myself," said Buttar, 45, who placed second in the March 3 primary to advance to the fall ballot and run to the left of Pelosi.

In a July 12 tweet Elizabeth Croydon first accused Buttar of sexually harassing her more than a dozen years ago. She also wrote that he was friends with a former "gang banger" who had thrown her "into a wall disabling me for years. I think the left should find someone else to run against Pelosi."

In a fuller statement sent to the media and publicly released July 21 on the website Medium, Croydon said she first met Buttar in 2003 at the communal home he lived in where she would go to meet other artists and activists. A comic and actor, Croydon claims Buttar "repeatedly pursued me for sex" and one time in the kitchen of his home "cornered me with his body and got so close and brushed up against my breasts."

About a decade later she claims Buttar made fun of her when she disclosed to a group of mutual friends that she had been celibate for several years and later that night shared her disclosure with other people at his communal home and offered to recruit men to have sex with her.

"I felt degraded, nauseated, and revolted that he would mock me in front of friends who looked to me as an outspoken voice for women," stated Croydon.

In a phone interview with the B.A.R. from Maryland, where she lives, Croydon said she decided to come forward as she is concerned Buttar will continue to harass other women should he be elected to Congress.

"I couldn't be quiet anymore because I felt there could be other people out there he did this to," she said. "Shahid is applying for a very high government position. He could continue to do this as a congress member."

She did not file any police reports or complaints regarding the incident in the kitchen, she said. Asked why she didn't come forward prior to the March election or when Buttar first ran for the House seat in 2018, Croydon said it was due to the "terror" of sharing her story publicly and knowing what other survivors of sexual harassment have been subjected to.

"As an experienced comedian I know stepping in front of the spotlight makes you a target for someone, let alone calling out a powerful name," she said.

A person close to Croydon, who asked to remain anonymous for fear of being targeted themselves, told the B.A.R. that Croydon had disclosed to them her encounters with Buttar about seven years ago.

Online, some commenters have suggested Croydon is speaking out in order to help Pelosi, as this is the first time she has faced a progressive opponent since first running more than three decades ago. Croydon declined to talk about Pelosi, saying her focus was on her interactions with Buttar.

"Clearly, look at my Twitter feed and you will see I am of the left. I love Bernie Sanders," said Croydon, who backed the progressive Vermont senator's presidential bid this year.

Buttar insisted neither incidents Croydon claims occurred "are grounded in fact." Having been vocal in the past that victims of sexual harassment deserve to be taken seriously, Buttar told the B.A.R. that "all survivors should be heard, including my accuser. I am eager for the facts to come out and am confident they will vindicate me."

Two women who knew Buttar in the 2000s told the B.A.R. there was no credibility to what Croydon alleges occurred. Martine Zundmanis, who met Buttar in 2004 while working together on civil rights issues, said there is "absolutely no merit" to Croydon's claims.

"I think in context of the progress victims and survivors have made as a result of the #MeToo movement, to have someone as ethical and with so much integrity as Shahid to be attacked with lies like this is just disgusting," she said.

Dr. Margaret Flowers, on Twitter and in a phone interview with the B.A.R., said Croydon had falsely accused her partner, attorney Kevin Zeese, of sexual assault in 2006.

"It is really sad she is given any credibility," said Flowers. "I have known Shahid at least a decade; I have a lot of respect for him."

Asked about Flowers' tweet, Croydon said she doesn't recall making such an accusation against Zeese. She said she had sought a temporary restraining order against him after he left a threatening voicemail on her home phone. It stemmed from a dispute, she said, over Zeese not providing her a tape of an hourlong comedy performance she had done for free at a fundraiser during his bid as a Green Party candidate for a U.S. Senate seat in Maryland.

Late Tuesday, the executive board of San Francisco Berniecrats, which has endorsed Buttar, issued a statement regarding Croydon's accusations saying it takes "sexual harassment very seriously and will approach every case of sexual harassment with a survivor-first mentality."

It asked people not to insult or attack her and pledged to be "a safe space for other witnesses and survivors" who come forward as it reviews the matter and decides what steps it will take in "a fair and democratic process."

And that evening Jackie Fielder, a queer progressive and educator running against gay state Senator Scott Wiener (D-San Francisco), tweeted her support for the local DSA chapter rescinding its endorsement of Buttar, whom she noted she had not endorsed.

"May all the women Mr. Buttar has mistreated find healing," she wrote.

Campaign staff air grievances
Croydon's accusations come as several former Buttar campaign staffers speak out about what they say was a misogynistic work environment that led them to quit this spring. Among those who left were campaign manager Jasper Wilde, volunteer coordinator Patrick Cochran, and finance director Emily Jones.

Jones and Wilde declined the B.A.R.'s interview requests, citing their having signed nondisclosure agreements that prevent them from talking about their work experiences.

Cochran told the B.A.R. that he observed Buttar treat male staffers with more deference than female staffers, several of whom he said were treated "like crap." He said Buttar would discount Wilde's advice, to the point she would ask male colleagues to relay suggestions to him so they would not be discounted.

"He talked down to them all the time. He was really unpleasant to them," said Cochran, adding that he is a "completely left-wing person who would love to see Pelosi go. But I came to believe Shahid is not capable of doing that. He would be an embarrassment for our left-wing cause if elected."

Campaign field organizer Raya Steier, who is nonbinary and uses neutral pronouns, told the B.A.R. they observed a culture of misogyny within the campaign that emanated from Buttar and it led them to resign within two months of being hired.

"I saw a pattern of disregard for women in Shahid's behavior personally. It was one of the reasons why I left the campaign," said Steier, adding that they also felt Buttar had so mismanaged his campaign they felt it "had no future. The totality of these circumstances made me leave."

In response, Buttar denied he had created a hostile work environment or engaged in gender-based discrimination. He said the comments were made by former campaign personnel who were "not terribly loyal" to him and had been hostile to the campaign's volunteers.

He added that his concerns about one of the former staffers were "in no way was gender based. It was performance based" and that "the other people reportedly left out of solidarity with that person."

The heart of the disagreements, claimed Buttar, was his hiring professional campaign people who wanted him to run as a politician and not as an activist.

"Ultimately, it wasn't their campaign, it was my campaign," he said.

He insisted none of the allegations he is facing are supported by the facts.

"As an immigrant entering the political arena to challenge a wealthy oligarch, it does surprise me some people think of me as an institution wielding privilege," said Buttar. "It is surprising, it is unfortunate, and I dare say it is confused."

UPDATED 7/21/2020 with a statement from the San Francisco Berniecrats.

Web Extra: For more queer political news, be sure to check http://www.ebar.com Monday mornings for Political Notes, the notebook's online companion. This week's column reported on LGBT legal groups calling for an out person to be named to California's supreme court vacancy.