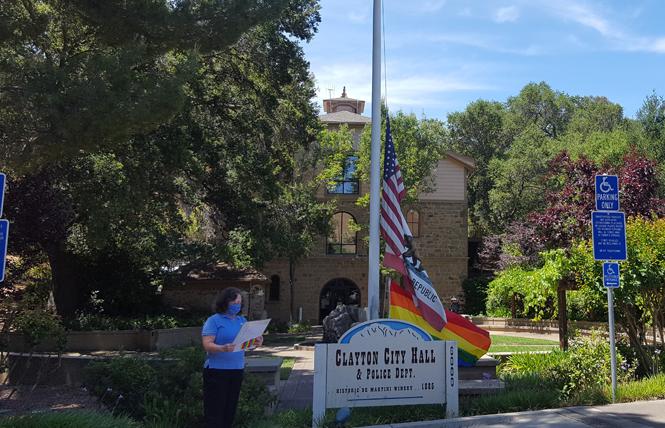 After reading her city's first proclamation declaring June as Pride Month, East Palo Alto Mayor Regina Wallace-Jones explained why doing so held particular importance for her. Fifteen years ago one of her siblings came out as a transgender woman.

"My thoughts here are that when I was approaching 30, my youngest sibling, he was approaching 15, shared with our family that he at the time but she now did not identify with being a male. I know for our family it was a very hard struggle and journey for each member of our family to get there," said Wallace-Jones during the City Council's Tuesday, June 2 meeting. "But today, almost 15 years later, we are there there. And it is not lost on me how complicated and difficult a topic like this and month like this can be in a city like ours."

City Councilwoman Lisa Gauthier added that the predominately black Peninsula city stands with the local LGBT community "with pride" and expressed her disappointment that it could not celebrate Pride Month in the usual manner with public parades and gatherings. This year, due to the novel coronavirus outbreak, most Pride events are being held virtually, as was the council's meeting.

"We stand with you through this difficult time of COVID and everything else," said Gauthier.

An hour later in the East Bay town of Danville, its council also issued a Pride Month proclamation for the first time. In reading it during her council's livestreamed meeting, Mayor Karen Stepper noted that it called for Danville to annually proclaim June as LGBTQ Pride Month.

"The Town of Danville recognizes the importance of equality and freedom, and is dedicated to fostering acceptance of all its citizens and preventing discrimination and bullying based on sexual orientation and gender identity," read Stepper.

With the issuance of the two proclamations, LGBT community leaders in San Mateo and Contra Costa counties edged closer to achieving their goal of seeing every one of the incorporated cities and towns in their jurisdictions mark Pride Month this year in some manner. Because of the pandemic upending Pride plans this year and forcing people to shelter at home, the Pride Visibility campaigns took on greater importance so that LGBT people could feel accepted and embraced by their hometowns.

"This visibility allows LGBT residents to know they are seen and they are important," Andres Loyola, a training and peer group coordinator at the San Mateo County Pride Center, told the East Palo Alto council members.

Tanya Beat, director of the San Mateo County LGBTQ Commission, told the Bay Area Reporter this week that she had received confirmation from all but one of the county's 20 cities and towns that they would celebrate Pride Month by issuing a proclamation or raising the rainbow flag — or doing both — in the coming days. The lone holdout on the list is Atherton.

The affluent town's mayor, Rick DeGolia, told the B.A.R. Monday, June 1, that he is hopeful his council will issue a Pride Month proclamation when it next meets Wednesday, June 17.

"I don't know what Atherton will decide. I am putting on our agenda for our next meeting and hopefully, I will have support from other council members," wrote DeGolia in an emailed reply.

In Contra Costa County the only two cities among the 19 in the East Bay jurisdiction that had not previously celebrated Pride Month were Danville and Clayton. Both have now done so, as Clayton not only issued a proclamation in honor of Pride it also raised the rainbow flag at several sites in its downtown area Monday. They will fly throughout the rest of June.

In the coming days LGBT residents of the county expect to see every city declare June as Pride Month, with many also raising the rainbow flag.

"We hope that Contra Costa County is but a ripple in this vast ocean of change and that other counties and cities join us. It is never too late to do the right thing for a better tomorrow," gay Richmond resident Cesar Zepeda, who helped found his city's Pride committee and has worked on the countywide Pride initiative for the last several years. "For that person reading this and struggling with being who they are; know that there is hope, and the rainbow will always come out even after a darkest of storms."

Flying Pride flag still an issue
But for some city councils, raising the rainbow flag in front of their city halls is still a step too far for them to take. Such was the case in Foster City, where its council voted Monday night to reject a request that it fly the international symbol for the LGBT community in addition to its issuing a Pride proclamation for the second year in a row.

As the B.A.R. first reported online shortly after the June 1 meeting, the Reverend Jim Mitulski, a gay man who is pastor of the Island United UCC Church in the city, criticized the decision. He was one of two people who had asked the council members to approve flying the flag, and he was critical of their citing concerns doing so would require them to also fly flags associated with racist causes or groups.

Mitulski could not address the council during its virtual meeting as he was just getting home from attending a peaceful demonstration in front of the city of Alameda Police Department. He is now reaching out to the council members to request they revisit their decision. In the meantime, he intends to find a way to fly the rainbow flag in front of his church this year in a more visible spot than it has in years past.

"We will likely raise a flag on the church property. We already hang one in the window but it's hard to see from the street. Plus, I can't figure out how to have protests right now," Mitulski told the B.A.R.

A number of people Tuesday night asked the Danville Town Council to also consider flying the rainbow flag in their submitted comments read by the town clerk. Among them was Jacquie Guzzo, the president of the local PFLAG chapter who accepted the Pride proclamation.

She and several others also requested that the city fly the Black Lives Matter flag in light of the protests against police brutality taking place across the country. In terms of seeing the rainbow flag flying in the town, Guzzo noted it would send an especially important message to LGBT youth in the area.

"Many of our kids here in Danville didn't come out to us until they left to go to college because of being afraid they wouldn't be accepted due to the negative messaging they were hearing here in Danville," wrote Guzzo.

Another person sent in an email that concluded, "Fly the damn flag!"

The council members, however, did not address the flag raising requests.