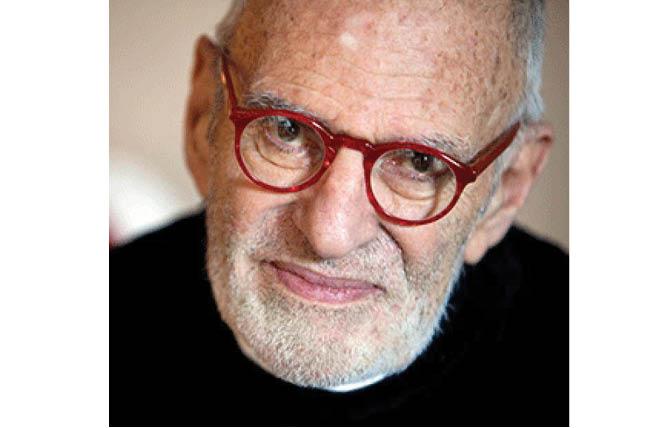 Larry Kramer — the New York City-based gay playwright and author whose involvement in the Gay Men's Health Crisis and ACT UP changed the course of the AIDS epidemic — died May 27. He was 84.

He died in Manhattan, where he lived near Greenwich Village, of pneumonia, according to his husband and longtime partner David Webster. He had been in poor health for some time — having endured liver damage from hepatitis, an HIV infection for several decades, and a broken leg last year.

"I scarcely knew Larry, having encountered him several times in the late 1980s and early 1990s through my work with ACT UP, Project Inform and other groups," Beswick wrote in an email to the Bay Area Reporter. "And yet, he was one of the most influential figures in my life, and for queer people generally, whether they know it or not. It's difficult to imagine the world without him."

In a statement late Wednesday, ACT UP/New York announced a dual memorial service and demonstration to be held Thursday, May 28, at 5 p.m. Pacific Time at the New York City AIDS Memorial in Lower Manhattan.

"The event will include mask-wearing and social distancing," the statement read. "We will be livestreaming on the ACT UP/New York page on Instagram, Facebook and Twitter. People who are livestreaming are asked to post a photo with the attached placard and a candle with a message saying #ThankYouLarry."

"Larry was our beacon, our inspiration, and sometimes our nemesis. But through good times and bad, we moved forward in our quest to end the AIDS crisis and to identify and defeat the villains in power whose crimes or apathy allowed a disease to become a worldwide plague," the group stated. "His uncompromising honesty moved us to greater achievements. The AIDS plague is not over. And neither is ACT UP. In memory of Larry Kramer, we will continue to demonstrate, lobby, protest, and fight the forces that allow this plague to flourish. We will stand up to the homophobia, racism, misogyny and transphobia that still aggravate this pandemic. We will move forward with anger and purpose in memory of our beloved comrade."

Mr. Kramer was born June 25, 1935 in Connecticut and grew up in Maryland. He returned to the Constitution State to attend Yale University, graduating in 1957 with an English degree.

After receiving an Academy Award nomination in 1969 for screenwriting for "Women in Love," he turned his attention to writing.

His 1978 book "Faggots" — a parody of late 1970s gay, urban life — was widely ridiculed for its implicit criticism of promiscuity and recreational drug use. Many gay bookstores wouldn't carry it.

Mr. Kramer tried to alert gay men to the dangers of AIDS at a time when many people did not want to recognize the severity of the disease. His 1983 essay "1,112 and Counting" in the New York Native, an LGBT newspaper, began "If this article doesn't scare the shit out of you, we're in real trouble. If this article doesn't rouse you to anger, fury, rage, and action, gay men may have no future on this earth. Our continued existence depends on just how angry you can get."

Mr. Kramer's blistering attacks on government inaction on AIDS, both federally and in New York City, led to his ouster from GMHC.

Mr. Kramer wrote about his experiences with GMHC in a play — "The Normal Heart" — in 1985. It became an HBO film in 2014. The character based on Mr. Kramer was played by Mark Ruffalo.

Mr. Kramer was the key leader in the AIDS Coalition to Unleash Power, or ACT UP, which was founded in 1987. ACT UP's famously confrontational style brought controversy — members staged 'die-ins' and protested on Wall Street and inside Manhattan's St. Patrick's Cathedral — but also publicity.

After Kramer got the attention of Dr. Anthony Fauci, longtime director of the National Institute of Allergy and Infectious Diseases, by calling him out as an "incompetent idiot," ACT UP was able to establish a working relationship with him and other federal officials. As the B.A.R. reported in 2011, the two went from a confrontational start to becoming good friends.

"Once you got past the rhetoric, you found that Larry Kramer made a lot of sense, and that he had a heart of gold," Fauci told the New York Times Wednesday.

That relationship helped lead to the development and production of antiretroviral therapies to lengthen the lives of people who become infected with HIV.

After Mr. Kramer received a liver transplant in 2001, Fauci helped him get into an experimental drug trial that saved his life.

Mr. Kramer continued to write later in life and was a Pulitzer Prize finalist in 1992 for "The Destiny of Me," which was a sequel to "The Normal Heart."

It was Mr. Kramer's initial rejection by Webster in the 1970s that inspired the "Faggots" novel — but in a twist of fate, they moved in together in 1994 and got married in 2013, after it became legal in New York State.

Mr. Kramer continued to write and speak until he died, in spite of his health problems. According to a March New York Times piece, he was writing a play based on the COVID-19 outbreak titled "An Army of Lovers Must Not Die."

"Larry Kramer was an inspiring playwright, author, and pioneering campaigner on LGBT+ and HIV issues. He helped galvanize the formation of the AIDS activist group ACT UP, which successfully challenged U.S. government inaction and forced pharmaceutical companies to speed their efforts to research and trial treatments. He also helped establish the Gay Men's Health Crisis, which did so much to support people living with HIV/AIDS," Tatchell stated.

"ACT UP's efforts helped save the lives of millions of people worldwide and Larry was part of that achievement. His often-angry tirades against President (Ronald) Reagan, the New York Times, drug corporations and the medical establishment were searing and effective. I counted him as a friend and comrade. He will be missed and remembered for decades to come," he added.

Michael Petrelis, a co-founder of ACT UP/New York, is a longtime activist who now lives in San Francisco.

"I was honored Larry sought my advice about fighting AIDS before he made his speech that launched ACT UP," Petrelis told the B.A.R. Wednesday. "'We need to get arrested in big numbers and make the news,' I said. In his speech he cited with praise the group I belonged to, the Lavender Hill Mob, and Larry wanted more of the angry activism we practiced to save lives. I was proud to call him my friend, occasional adversary, and furious mentor. The world is a better place because of Larry."

"At the beginning of the HIV and AIDS crisis — when thousands of LGBTQ people and people of color were dying — Larry Kramer spoke up when our government was silent," HRC President Alphonso David stated. "Larry's unending courage and tireless efforts helped awaken a nation to the urgent crisis of HIV and AIDS and brought us closer to a cure than ever before. Through his life and work, Larry Kramer inspired generations of advocates, many of whom are alive today because he dared to speak out and act up. We mourn the loss of this advocate, and rededicate ourselves to our collective responsibility of ending the HIV and AIDS epidemic — which unfortunately continues to largely impact people of color today — once and for all."

Queer historian Gerard Koskovich put the AIDS era in context in his comments about Mr. Kramer.

"Kramer had an immense ego, an immense sense of his own righteousness, and an immense capacity for rage," Koskovich wrote in a Facebook message to the B.A.R. "Those traits clearly made him difficult to deal with in many circumstances. They also offered just the example we needed when our country and our society largely turned its back as AIDS annihilated a generation of gay men.

"Well-behaved people are ill-equipped to confront systemic bigotry and to force massive institutions to change direction. In the darkest years of the AIDS crisis, Kramer's writing, activism, and public persona crystalized the anger so many of us rightly felt and helped us channel our anger into direct action. That is perhaps his most invaluable contribution."

Mr. Kramer spoke with the B.A.R. in 2012 in an interview that focused on "The Normal Heart."

One of Mr. Kramer's life's works was trying to show that a gay culture had to be defined by more than sex ("The only way we'll have real pride is when we demand recognition of a culture that isn't just sexual," the 'Normal Heart' character based on Kramer said in that production). He told the B.A.R. in 2012 that he was glad young people were impacted by his work.

"When they did come in and see ('The Normal Heart'), they were incredibly moved because so many of them were unaware of this history at all," he said.

He didn't realize he would be alive to see future generations impacted.

"I thought I'd be dead by the time the play closed in New York," Mr. Kramer said. "I've been very lucky, and anyone who is still alive from those years has been very lucky."

Updated, 5/27/20: This article has been updated with additional comments and the May 28 livestreamed memorial.