Editorial: Newsom deserves to be 'blasted' 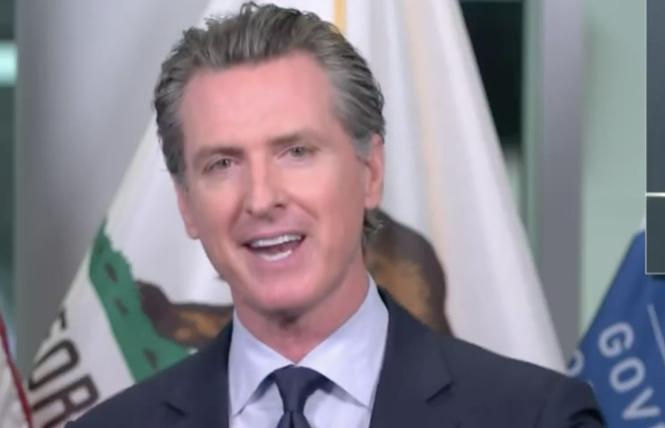 Last week we reported that California LGBT leaders were angry that Governor Gavin Newsom and his public health department have not gathered data on the sexual orientation and gender identity of COVID-19 patients. LGBT legislative leaders have spoken to the governor about it; state advocacy groups have sent out emails; we've editorialized about it. Several years ago, California adopted laws to mandate the collection of what is known as SOGI data in several state agencies, including the health department; still, nothing has happened. It got to the point that gay state Senator Scott Wiener (D-San Francisco) introduced a bill to mandate SOGI data collection, and it was the morning of the first legislative hearing on his Senate Bill 932 that advocates held a conference call with reporters. "Frankly, I will be honest. Frankly, I wish I wasn't forced to introduce this legislation. This issue should have been taken care of already," said Wiener, who chairs the Legislative LGBTQ Caucus, whose seven members are all co-sponsors of SB 932. We headlined the article, "Advocates blast Newsom for lack of COVID LGBT data." We reported what we heard on the call, that advocates were forcefully reprimanding the governor for his inaction. The fact that the state has not been asking for SOGI data since the start of the pandemic "is frankly appalling," said Wiener. "It is appalling we have the ability to collect the data and it is an afterthought."

On the call, Equality California's executive director, Rick Chavez Zbur, pointedly bemoaned that he wasn't asked his sexual orientation when he took a coronavirus test. "This is a really urgent issue. In my six years as director of Equality California this has truly been the biggest, most urgent, and troubling wake up call I have experienced," said Zbur. "In 2020 in the state of California, we literally have to beg our government and public health officials to collect information to protect the health of LGBT people."

Later that afternoon, we were able to ask Newsom about the missing SOGI data during his daily virtual coronavirus briefing. "God Bless — I've been very clear that we want this information to be forthcoming. We've been in touch with Scott Wiener, who's been an outstanding leader in this space, and have been in contact with the LGBT caucus on this," Newsom said. "I'm very deferential to the work Scott Wiener is currently doing. Nobody wants to see this information more than (state public health director) Dr. Sonia Angell."

We certainly hope so. Angell's department has not been very communicative with the LGBT press. When we published an exhaustive three-part series on SOGI data in 2017 that was written as part of a California Health Journalism Fellowship project with the University of Southern California-Annenberg Center for Health Care Journalism, the state DPH declined our request for an interview and only responded to emailed questions. (Angell did not assume the directorship of the state DPH until 2019.)

The staff at Equality California took strong exception to our headline. Their position was that since nobody actually used the word "blast," the headline was inaccurate. We disagreed and told them so. When a state senator threatens to go to the courts, as Wiener did later on the call, and when he's stating that he shouldn't even have to come up with the legislation, we characterize that as a "blast," or a verbal explosion. EQCA didn't seem pleased that we were able to ask Newsom the question about SOGI either.

It's as though EQCA doesn't want to ruffle feathers with Newsom or his administration. But to us, that's EQCA's job — to advocate, vigorously, for the queer community. And let's be clear — the buck stops with Newsom; he's the chief government executive of California.

EQCA has sponsored Wiener's SB 932 and has made it a priority bill this year. But in seeking to downplay the angst among LGBT lawmakers, EQCA sent out some tweets disputing our reporting. A reporter for another LGBT publication agreed with them.

The bottom line is that Wiener is correct — he shouldn't have to introduce a COVID-19 SOGI bill because the state health department should already be collecting SOGI data and should easily be able to pivot to include COVID-19 information. Assemblyman David Chiu (D-San Francisco) authored the original legislation a few years ago and even gave state departments more time to get their systems up and running. Now, we're in the middle of a pandemic and SOGI data is still not yet being collected at the state level. And, while the virus does not discriminate, LGBT health experts have pointed out that health disparities do. As the B.A.R. and other outlets have reported, the National LGBT Cancer Network anticipates that LGBT people have more risk from COVID-19 because of higher rates of cancer, HIV-infection, smoking and its attendant respiratory illnesses, and structural discrimination in the medical field.

Perhaps the most head-scratching thing about EQCA's reaction to our reporting on the matter was the fact that within a couple of hours of the conference call, it was fundraising off the need for SOGI data. "Sign our petition calling on public health leaders to collect LGBTQ+ data now," the email states. (And we agree, please donate.) And this, after explaining it's sponsoring Wiener's bill: "But we shouldn't have to wait for a bill to pass." (Italics in the original.)

Exactly. EQCA can challenge us over our coverage, though in reality, it should be happy the issue is finally getting attention from the governor. The fact is that we helped put it on the state's radar in a public way by getting Newsom to answer our question during his news conference last week. Newsom has publicly pledged to sign Wiener's bill. He should do so as soon as it is passed, or issue an executive order in the interim so that COVID-19 data can be collected.