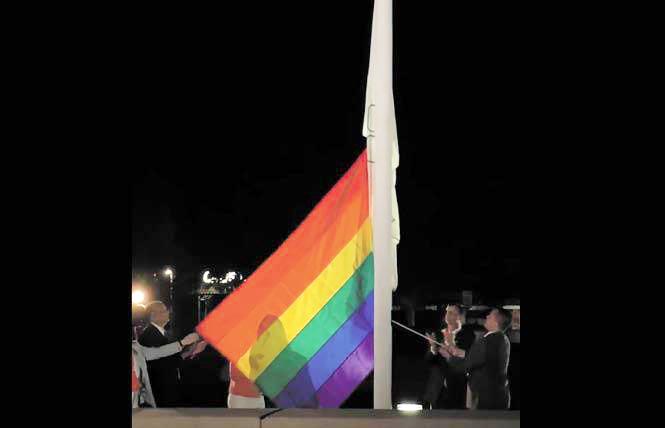 A year after the city council in Dublin, California found itself the focus of negative headlines across the country for initially refusing to fly the rainbow flag in honor of June being Pride Month, the East Bay city's five-person governing body easily adopted a Pride proclamation at its meeting Tuesday, May 19.

It also unanimously ordered its city staff to hoist the internationally recognized symbol of the LGBT community on a flagpole in front of City Hall throughout June. But it went one step further and requested that the more expansive version of the rainbow flag with black and brown stripes, which honor LGBT people of color, be flown.

Dublin City Manager Linda Smith informed the council that the staff would order the flag, known as the Philadelphia version for where it was first flown in 2017, and if it didn't arrive in time then they would fly the rainbow flag they already own and switch it out for the newer flag once it arrives.

Councilman Arun Goel, who is straight and currently serving as vice mayor, made the request to fly the eight-colored rainbow flag in "consideration of additional inclusivity." It was in stark contrast from last year, when he was one of the three council members to vote at first against flying the rainbow flag.

He said the city should fly the Philadelphia version of the flag "to focus on areas of the LGBTQ+ community that have not been provided enough visibility and also would be considered the most marginalized."

Gay City Councilman Shawn Kumagai, who sought the Pride recognition by the city for the second year, voiced his support for doing so. In introducing his Pride Month request, Kumagai referred to last year's flag flap, stressing that the city's flying the rainbow flag should be seen as "additive, it is not divisive. I want to make sure it is very clear that is what this represents."

Mayor David Haubert also brought up last year's controversy. He too was a no vote at first on the flag last year only to then switch his vote and deliver an apology to the LGBT community.

"Reflecting back on last year I will echo all the comments of my colleagues it was indeed an experience we grew in and learned from. It opened our minds and of course we corrected," said Haubert, noting that this year the council was "making a move tonight as a team."

And in terms of the Pride proclamation honoring the LGBT community, Haubert said, "I stand behind every word on that proclamation."

Other cities to recognize Pride Month
The San Leandro City Council Tuesday also unanimously approved its Pride proclamation and request to fly the rainbow flag from gay City Councilman Victor Aguilar Jr. In a Facebook post after the meeting Aguilar thanked his colleagues for their "overwhelming support. Couldn't be prouder to call San Leandro home."

Across the bay in San Mateo County, the City Council in Redwood City voted Monday, May 18, to again celebrate Pride Month in June by flying the rainbow flag. Tuesday night the city council in Half Moon Bay agreed to do so for the first time this June.

They are the latest Mid-Peninsula cities to sign on to the Pride Visibility campaign LGBT leaders are pushing this year to see all 20 of the county's towns and cities celebrate Pride for the first time. Daly City and San Carlos already agreed to do so, with the South San Francisco City Council set to discuss the matter at its May 27 meeting.

In Contra Costa County, LGBT leaders expect all 19 of the East Bay jurisdiction's cities and towns to celebrate Pride Month this year for the first time now that the last two holdouts — Clayton and Danville — are set to issue proclamations. As the B.A.R. reported online Monday, May 18, Danville's town council is set to do so at its June 2 meeting.

While it is not expected to raise the rainbow flag this year, it is working on doing so at some point, according to Councilman Newell Arnerich. Clayton's city council voted in April to fly the Pride flag for the first time during the month of June.

The Pinole and Walnut Creek city councils voted Tuesday, May 19, to again fly the flag, while El Cerrito will do so when its council meets June 2. The 14 other cities in the county are also expected to officially celebrate June as Pride Month as their councils meet over the coming weeks.

It is a goal the Lambda Democratic Club of Contra Costa County, the county's LGBT political club, has been working toward since it was launched in 2017.

"This year every city has stood up to hate and decided to show hope and love to all its residents. Especially to those that are marginalized, looked down on, made fun of, and bullied," said gay Richmond resident Cesar Zepeda, a founding member and first president of the Lambda club. "This is a great achievement; however, we are not at the top of the rainbow yet, but we will continue walking together until there are no more suicides because someone deciding to come out of the closet; until there are no more murders of our brothers and sisters for whom they fall in love with or for simply being who they are."

Queer immigrant to join SF Dem Party body
When the San Francisco Democratic County Central Committee meets next Wednesday, May 27, it is expected to approve the appointment of Carolina Morales to fill a vacancy on the local party's governing body.

Morales, a queer immigrant from Venezuela who is now an U.S. citizen and lives in the Excelsior district, will serve as a representative from the 17th Assembly District on the eastside of the city. She will be replacing Frances Hsieh, a lesbian who was recently reelected to the DCCC but had to resign due to her family moving to the city's 19th Assembly District.

"First I was surprised then also honored to be considered. Then I thought precisely this time of coronavirus — and I saw it on campus the inequities that already exist in our society are getting doubled or tripled at this time — it is important we continue having people who are from this community," said Morales, who recently completed her first year as a graduate student at UC Berkeley seeking a master's in social work and serves as an adviser for the Center for Political Education. "I am Latina; I am an immigrant; I am a part of this community bearing the brunt of this pandemic in San Francisco. It is important to have people lift up the voices of my community."

Gay party chair David Campos announced his decision to appoint Morales to the seat in a Facebook post earlier this month. Morales, a former co-president of the Harvey Milk LGBTQ Democratic Club, worked as a City Hall aide to Campos when he served as the city's District 9 supervisor and his successor Hillary Ronen, who was Campos' chief of staff.

"Given the challenges facing the undocumented community in our city, state, and country, it was important for me that this seat go to someone who has lived the experience of being undocumented," wrote Campos. "This is, after all, a community that has been marginalized and in the age of COVID-19 is being left out of any federal assistance. It was also important that the LGBTQ experience continues to be represented."

Campos also appointed two women of color as delegates to the state party, Sarah Souza from AD 17 and Kelly Akemi Groth from AD 19. They are both expected to win approval next week from the DCCC.

Web Extra: For more queer political news, be sure to check http://www.ebar.com Monday mornings for Political Notes, the notebook's online companion. This week's column focused on a new LGBT effort to fliphouse control of statehouse chambers to Democrats.