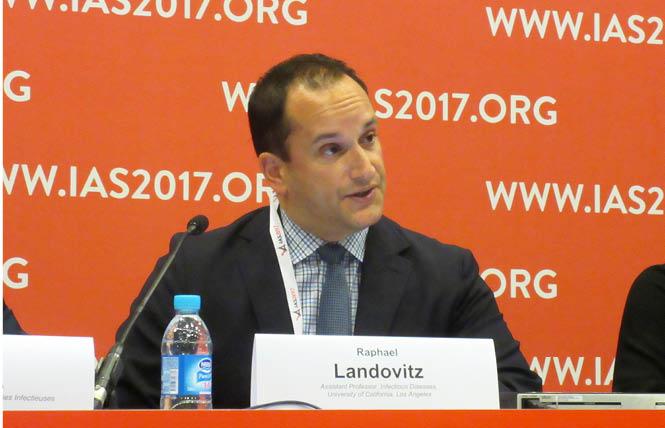 Long-acting injections given once every two months can prevent HIV at least as well as daily pills for gay and bisexual men and transgender women, according to interim study results released May 18 by the National Institutes of Health.

"Demonstrating conclusively that long-acting injectable cabotegravir is highly effective almost two years earlier than originally expected is exciting news," study chair Dr. Raphael Landovitz of UCLA said in a news release issued by the HIV Prevention Trials Network. "It is inspiring that we may soon have additional HIV prevention options for at-risk individuals who have difficulty with or prefer not to take pills."

The U.S. Food and Drug Administration approved daily Truvada for PrEP in 2012. Last October, the FDA gave the nod to a second daily PrEP pill, Descovy (tenofovir alafenamide/emtricitabine). However, due to a lack of data, that indication does not include people who are at risk of acquiring HIV through receptive vaginal or frontal sex. Daily pills are currently the only approved PrEP dosing schedule, although studies have shown that on-demand or "2-1-1" PrEP taken before and after sex is also highly effective.

The HPTN 083 trial, which started in 2016, enrolled 4,570 HIV-negative gay and bi men and transgender women who have sex with men in seven countries, including the United States. They were randomly assigned to receive either cabotegravir injections in the buttocks every eight weeks plus daily placebo pills, or placebo injections plus daily Truvada.

A planned interim review of the study showed that among the 50 people who acquired HIV, 12 were taking long-acting cabotegravir and 38 were taking daily oral Truvada. This translates to an HIV incidence rate of 0.38% in the cabotegravir group versus 1.21% in the Truvada group.

These results show that cabotegravir is "non-inferior," or at least as good as Truvada. Due to trial disruptions related to the COVID-19 crisis, the researchers decided to stop the study before it could meet the statistical criteria for showing that it is superior.

In the study population as a whole, the long-acting injectable regimen was 69% more effective in reducing the risk of HIV compared with daily pills. This is an impressive finding, because daily Truvada is more than 99% effective in reducing HIV risk when taken consistently. But some people find it difficult to stick to the daily schedule.

Based on these findings, the study's independent data and safety monitoring board recommended that the randomized portion of the trial should be stopped ahead of schedule — it was expected to run until 2021 — and everyone should be offered the injectable regimen.

"Each year, an estimated 1.7 million people are newly diagnosed with HIV. To lower that number, we believe more prevention options are needed in addition to currently available oral tablets for daily use," said HPTN co-principle investigator Dr. Myron Cohen of the University of North Carolina at Chapel Hill. "If approved, a new injectable agent, such as long-acting cabotegravir administered every two months, could play an important role in reducing HIV transmission and helping to end the HIV epidemic."

A companion study of long-acting cabotegravir for cisgender (non-trans) women is currently underway in Africa. The data safety and monitoring board also reviewed interim results from that study, which started a year later, and recommended that the trial should continue. This suggests it is too early to tell if the injectable regimen works as well as daily pills for this population.