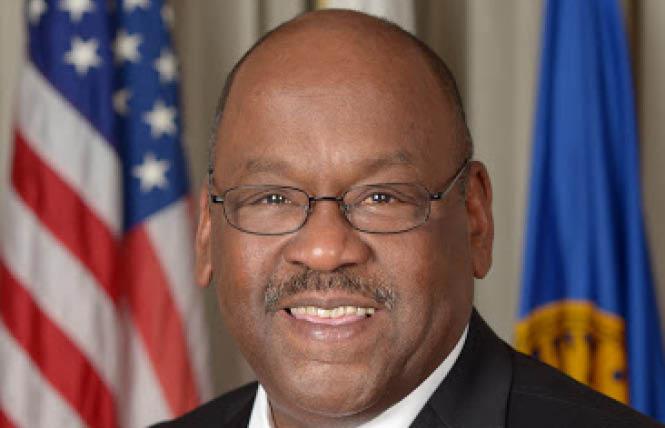 Daly City will fly the rainbow flag for the first time this June, according to city officials, as it joins several other municipalities in San Mateo County that have signed on to a Pride Visibility campaign LGBT leaders are pushing this year.

At its meeting May 11 the five-person City Council unanimously issued a proclamation declaring June as Pride Month in Daly City in honor of the annual weekslong celebration of the LGBT community. It also agreed to raise the Pride flag on Monday, June 1, which council members said would be their city's inaugural flying of the internationally recognized symbol for LGBT people.

The city agreed to do so, as explained in the proclamation, in order to recognize "all LGBTQ residents whose influential and lasting contributions to our neighborhoods make Daly City a vibrant community in which to live, work and visit."

Vice Mayor Juslyn C. Manalo initiated doing so after being contacted by a constituent, Craig Wiesner, a gay man who represents Daly City on the county's LGBTQ commission. Saying it was "really great" to hear from him about the request, Manalo said she agreed to pursue the Pride recognition with "no hesitation."

While the city in the past has issued Pride proclamations, it has never before flown the rainbow flag, said Manalo, noting that doing so will not only recognize LGBT residents of Daly City but also those LGBT people employed by the Mid-Peninsula city.

"This is a testament that even though with COVID-19, we are sharing as a community together," said Manalo, referring to the fact much of California is under shelter-in-place orders due to the outbreak of the novel coronavirus. "This is long overdue. We are happy to celebrate this June with you."

Mayor Glenn R. Sylvester recounted how, as an officer of the San Francisco Police Department (he is now retired), he used to patrol the LGBT Castro district in San Francisco back in the late 1970s and had entered the police academy the same week that the late gay supervisor Harvey Milk, who represented the neighborhood at City Hall, and then-mayor George Moscone were assassinated.

"It was at that time when folks up in the Castro district did not like police. Whenever the police came around they would blow whistles because they wanted other people to take a look at what they were doing," recalled Sylvester. "I would have had an alternative lifestyle person drive with me in the patrol car down Castro Street and he would say, 'Doesn't he look handsome?' And I would say, 'Doesn't she look good too?'

"We are all human. We all bleed red," he added. "We have to respect and love each other."

As the Bay Area Reporter first reported online Monday, May 11, LGBT leaders are working on seeing all 20 of the incorporated cities and towns in San Mateo County celebrate Pride Month in June. If achieved, it would mark a first for the Peninsula jurisdiction just south of San Francisco. A similar effort is underway in Contra Costa County this year, where the city of Danville is the lone municipality to yet recognize Pride Month in some capacity.

In 2019 at least eight of the county's cities and towns officially marked Pride in June by either issuing a Pride proclamation or raising the rainbow flag — or doing both — that month, according to local LGBT leaders and a search of city agendas and social media accounts. It is hoped that the octet will again celebrate their LGBT residents this year in some manner.

Redwood City was the very first city to kick off any Pride planning for 2020, said Belmont resident Tanya Beat, who identifies as lesbian and queer and is director of the San Mateo County LGBT Commission.

"They contacted us back in March about flag raising and doing the Proclamation," she told the B.A.R.

Woodside is exploring how it can take part in the Pride Visibility campaign for the first time this year, and the City Council in Half Moon Bay is also expected to soon take up the issue as well, according to LGBT leaders.

Speaking to his council members in Daly City Monday night, Wiesner explained how important it is for LGBT youth, seniors, and those struggling with coming out to see their local government celebrate Pride Month.

"I know how much this means to LGBTQ people," said Wiesner, who with his husband has called Daly City home for three decades. "I am proud to be here and thank you so much for proclaiming June Pride Month."

He added, "It is a small thing raising the flag for one day, but it means so much."

For more information about the Pride Visibility campaign and steps people can take to have their city join in, visit https://bit.ly/2AqCubz