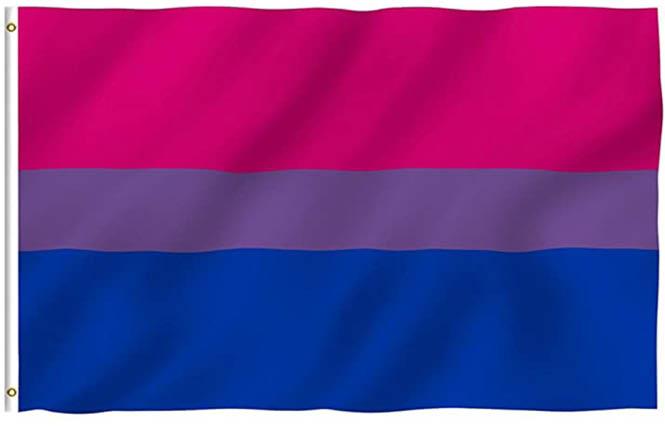 After the president of a leading national bisexual advocacy group drew controversy for (falsely) claiming ownership over the bisexual pride flag, it was announced she will be replaced by an Oakland-based bisexual artist and health care worker.

The public upheaval in BiNet USA (officially the Bisexual Network of the USA Inc.) began April 28 when the organization's president, Faith Cheltenham, took to the organization's Twitter account to assert ownership over the bisexual Pride flag.

"The copyright of the flag is solely BiNet USA's; it does not belong to any one founder and no founder can approve its use without the President and/or board approval," one in a series of April 28 tweets states. "And yet @Target where can we send a letter? Cause you sell #biprideflags too? Where is our cut?"

The bisexual flag was created in 1998 by Michael Page, with the intention of increasing bi visibility. On a contemporaneous website, Page wrote that "this flag is free for public use."

The Wikipedia entry for the bi Pride flag also credits Page with its creation.

BiNet USA's Twitter account tweeted at a number of individuals and organizations using the bisexual Pride flag without its permission. These included the Human Rights Campaign and Jayne B. Shea, a bisexual advocate and author who sells apparel with the bisexual flag design.

"Hi @JayneBShea! We at BiNet USA are asking you to get in touch so we can discuss your use of the bisexual pride flag without any money going to our organization," a nighttime April 28 tweet states. "We know this is a lot so we hope we can work a new deal!"

Thank you for joining the assholes who make our lives miserable!

New BiNet USA president will take charge next year
Lauren Beach, then a BiNet USA board member, took to Twitter the following day to explain that while the tweets were from the organization's official account they did not reflect the views of the organization as a whole.

"I want to clarify these are the views of #BiNet President (Faith Cheltenham), who also was the person tweeting this content earlier today from the now-defunct BiNet twitter. I do not share the view that #BiNet owns or should seek to license the #bisexual pride flag," Beach wrote. "I also want to say that as an organization, over the last 30+ years, #BiNet has done important work for #bisexual+ people. Though I do not agree with today's statements, I do believe in the organization and its significance in the history and ongoing advocacy for #bi+ communities."

On May 1, Beach announced her resignation from the group's board in another tweet. The same day, the board of BiNet USA released a statement seeming to back down.

"The bisexual pride flag is intended for bisexual community use," it states. "The community has long been able to utilize it for the creation of gifts and goods to help benefit ourselves and each other. BiNet USA continues to support the independent bisexual seller and is working to bring more bisexual products into market.

"We want to be clear: we are a nonprofit organization. We frequently donate our time and energy and promote others' work without the aim to make any money personally."

Two days later, Cheltenham published two blog posts. In the first, Cheltenham states that BiNet USA will no longer be using the bisexual Pride flag at all but will instead use a flag she designed in 2019, the bisexual people of color flag.

In the second, Cheltenham (referring to herself in the third person as thefayth) said that she will be stepping down from the leadership of BiNet USA effective January 21, 2021 in favor of BiNet USA's vice president, Juba Kalamka.

The second blog post references "private donations" made by Cheltenham via BiNet USA and states that these will be announced in the future.

"In September 2019, the current board of BiNet USA approved the future disclosure of all private donations made by Faith Cheltenham via BiNet USA. This was part of an agreed upon step-down plan with thefayth after board service as the most active board member, volunteer and staff member of BiNet USA from 2004-2018," Cheltenham's statement reads. "This accounting including prepared statement is forthcoming within 3 (three) months and will include the name, city and organization that benefitted from direct donation from BiNet USA members and employees."

The names of the six members of the BiNet USA board will also no longer be available to the general public "unless otherwise legally required," according to the statement.

Cheltenham, Shea, and Beach did not respond to Bay Area Reporter requests for comment for this story.

Kalamka did respond, but only to refer the B.A.R. to Cheltenham's blog posts and the May 1 statement about the flag.

"Please refer to the links below for further contextualization and clarification regarding the referenced online conversations of the last few days," he stated.

Kalamka is an assistant HIV services manager at St. James Infirmary in the Polk Gulch neighborhood of San Francisco.

The B.A.R. has been trying to confirm who is leading that organization since former executive director Toni Newman departed unexpectedly in February.

Kalamka, 49, is also a bisexual activist and recording artist. He is a founding member of the LGBT hip-hop group Deep Dickollective, which started in 2000.