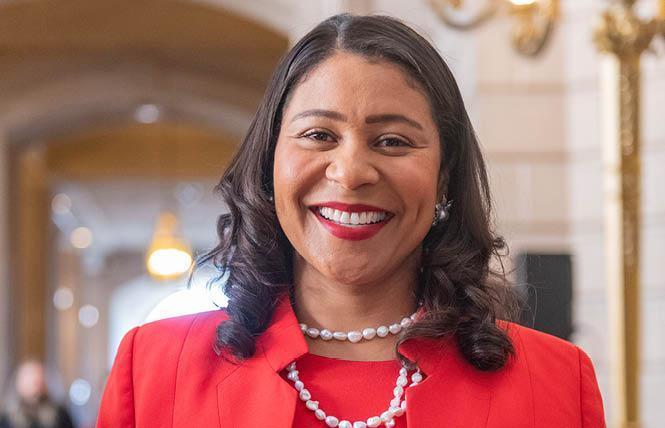 The Harvey Milk LGBTQ Democratic Club issued an apology to San Francisco Mayor London Breed after the progressive political group's president sent out an email Saturday that used a racist trope in attacking her homeless policies.

The club's May 2 email, which accused Breed of "hobophobia," drew scorn from at least one elected official, and the club subsequently apologized on its Facebook page.

Sent around 1 p.m. Saturday to the club's members, the email lashed out at Breed for "moving so sluggishly" on housing the city's homeless population in response to the novel coronavirus outbreak.

As the Bay Area Reporter previously reported, the Board of Supervisors passed an ordinance earlier this month requiring over 8,000 rooms be leased by April 26, but Breed has asserted that providing emergency staff for the rooms is logistically difficult at this time. Milk club leaders have been among those calling on the mayor to lease the hotel rooms immediately.

However, the club's emailed criticisms did not end there. It asserted that Breed, who is the city's first African American female mayor, has instituted policies toward the homeless population that constitute a form of "black on black crime." The phrase has been called out not only as a racist trope used against black people by white nationalists and others, but also factually inaccurate when looking at crime statistics.

"Homophobia and hobophobia are two sides of the same rancid, overspent coin," the email stated. "They both call upon the same negative, stereotypical instincts and propagate upon the same fearful types of human assumptions. We in the Milk Club did not come all this way just to live in a city that simply switches out one similar-sounding phobia for another and call it a day."

Speaking late Saturday by phone to the B.A.R. Kevin Bard, a gay black man who is president of the Milk club, said that he was the one who wrote the email.

"We are embarrassed and ashamed of an email that went out to the club listserv this morning. Our advocacy on behalf of people experiencing homelessness in San Francisco was harmed by today's message, and we unequivocally apologize for the reckless language used therein," the apology post states.

The club added, "We apologize to Mayor London Breed. We apologize to houseless people who deserve solidarity, not slurs. We apologize for using 'black-on-black crime,' a term with a racist history. We apologize to our members, who entrust this club to represent their values. Today's email failed that trust. We will be convening as a board to understand the lapse in judgment and accountability that allowed this email to go out unchecked."

According to a subsequent Facebook post from Jackie Thornhill, the club's vice president for events and fundraising, a single member of the club's board sent the email without any approval from other members of the board.

At a board meeting this weekend, a protocol for communications from the club going forward will be established. Bard told the B.A.R. that the meeting would happen Sunday, though he declined to say when.

He added that he didn't want to make a statement until he had the opportunity to speak with other members of the board.

Bard sent a statement to the B.A.R. May 6 saying that going forward there will be "no rush jobs on those e-blasts."

"We in the executive board decided to take a new, more peer-reviewed approach to our communications," the email stated. "More editors, more eyeballs, and different viewpoints from different writers."

The office of Mayor London Breed did not immediately respond to a request for comment.

On Sunday at 1:15 p.m. Bard posted on Facebook: "I truly feel terrible that I let everyone down. I let the issue of emergency housing for the homeless get the better of me emotionally and override my political judgment. I should have given the Milk Club Executive Board much more time to reject yesterday's eblast.

"I honestly don't know how I let this happen," he added.

Malia Cohen, a former San Francisco supervisor who now sits on the state Board of Equalization and who is black, thanked Bard on social media for apologizing. She had also called him out for the earlier comments.

"I think the rhetoric around the hotels has become unhelpfully overheated and toxic in general," he stated to the B.A.R. "The Milk club email was wrong and offensive, and the club leadership was right to quickly put out an apology."