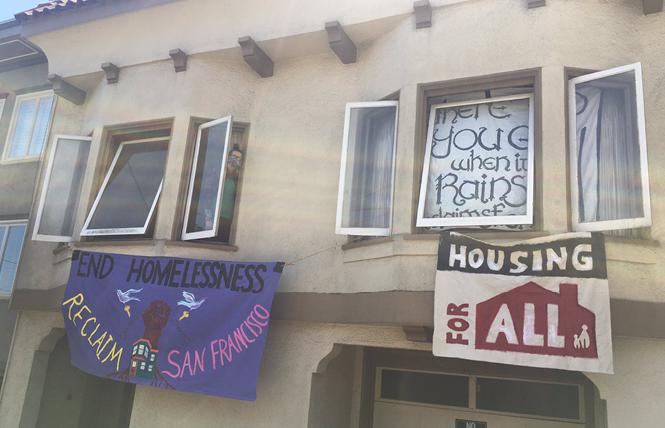 Couper Orona and Jess Gonzalez were briefly detained by San Francisco police before being cited and released around 4 p.m. May 1. They had been inside a vacant house at 4555 19th Street that was described as an investment property for about four hours, according to Quiver Watts of Reclaim SF, a housing rights group.

The women took inspiration from #Moms4Housing — the Oakland mothers who occupied a vacant house for two months before being evicted by the Alameda County sheriff's office.

Gay District 8 Supervisor Rafael Mandelman, who showed up after the pair was released by police, tied the occupation to the annual celebration of International Workers Day.

"There's a long tradition of social justice activism on May Day, and I'm glad to see that tradition alive and well even in the time of COVID," he said. "The current coronavirus crisis has thrown into high relief the vast social inequities and increasing inequality of our day. The requirement to shelter in place has reminded all of us that there are thousands of people in San Francisco that don't have that option."

"The only difference between us and someone who is housed is they have a roof over their head we don't, but we are all San Francisco residents! We should be treated as such," Orona said in a news release. "I love my city and I am there for my community, but the way our leaders have ignored our pleas for support is heartbreaking. We need permanent housing, and we need it now. We can't wait another day."

Orona used a megaphone to explain why the pair were occupying the house.

"I just want to say to London Breed that this is what I had to do, this is what we had to do," Orona said. "All in all we need housing — we are San Francisco, we are the shit, and we are supposed to take care of each other."

Around 2:45 p.m., police on-site gave dispersal orders to crowds who had gathered to express support for Orona and Gonzalez.

"I hereby declare this is an unlawful assembly and in the name of the people of the state of California all those assembled must disperse immediately," an officer said. "If you do not disperse you will be subject to arrest."

Protesters yelled "six feet" as the police forced them from 19th street around 2:50 p.m., referencing health guidelines that people should stay at least six feet apart to help prevent the spread of the novel coronavirus.

The police issued a statement on the incident to the B.A.R. via email.

"On Friday May 1, 2020 at approximately 12:26 PM, San Francisco Police officers from Mission Station responded to the 4500 block of 19th Street for a report of people blocking the street," the statement reads. "Officers arrived and determined that some individuals made entry into an unoccupied residence and locked themselves inside. Officers are in contact with the group. No injuries have been reported and no arrests have been made."

They want the city to move more people experiencing homelessness into hotels but beyond the temp fix, they want more permanent affordable housing— Erin Baldassari (@e_baldi) May 1, 2020

By 4 p.m., police had gone into the building, detained the women, cited them, and then released them outside of the house. Police also removed their property from the house and returned it to the women.

Specifically, the two women are upset that Breed has not implemented an ordinance passed by the San Francisco Board of Supervisors requiring that the city's roughly 8,000 homeless people be provided with hotel rooms during the coronavirus outbreak.

For her part, Breed has asserted that leasing these rooms to the homeless would be a logistical nightmare — providing adequate emergency staff to these hotel rooms would be very difficult, she claims.

The occupation is not the first protest of Breed's response to the ordinance — Thursday night a "die-in" was held outside her home.

The women posted banners at the Castro neighborhood home they are occupying that read "End Homelessness Reclaim San Francisco" and "Housing for All."

"It's outrageous that while houses sit empty, we're unable to safely shelter in place," Gonzalez said in a news release.

The women told a reporter with local news outlet KQED that the house has been vacant for four years. A Reclaim SF news release states that it is "investment property."

A property search on the San Francisco county assessor's website reveals that the home is owned by a trust, but it is unclear who is involved in that.

Watts told the B.A.R. by phone at 2 p.m. May 1 (several hours after the occupation began) that police were on-site and may forcibly remove the two women from the house.

"There's police outside the house," Watts said. "We certainly weren't expecting to be forcibly removed from the property today. It's certainly not good of the city to be doing this during the shelter-in-place order. We are surprised at the level of police presence."

Orona has been homeless for 10 years since she was disabled after being injured as a firefighter. She is known as the "street medic" because she gives medical care for homeless people, according to a Reclaim SF news release.

Gonzalez was evicted a year ago after her landlord would no longer allow her to have a service dog with her, according to the release.

When asked for comment May 1, Breed's office issued a statement defending the mayor's record on housing homeless people during the pandemic.

"In terms of our total homeless population, San Francisco has done more than any city in the country to move people into hotels, RVs, and other alternative housing sites," Breed press director Andy Lynch stated in an email to the B.A.R. "We have over 1,000 people right now who are in hotel rooms that we have secured, opened, and properly staffed to help ensure the safety of both the residents and the people working at these sites. We've secured over 2,700 rooms in total, and just this week we opened another four hotels with 294 rooms. We're continuing to move more people into these sites every day as we respond to this pandemic."

Updated, 5/1/20: This article has been updated with police activity and additional comments.