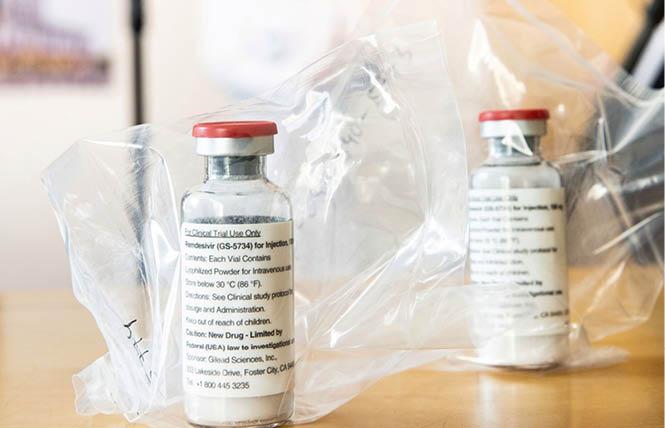 Remdesivir, an experimental antiviral drug from Gilead Sciences, led to faster recovery of patients with advanced COVID-19, the disease caused by the new coronavirus, according to data from a randomized clinical trial released April 29 by the National Institutes of Allergy and Infectious Diseases.

UPDATE: On May 1, the Food and Drug Administration granted emergency use authorization for remdesivir for the treatment of suspected or laboratory-confirmed COVID-19 in adults and children hospitalized with severe disease.

Speaking at the April 29 White House briefing, NIAID director Dr. Anthony Fauci said that the data "show that remdesivir has a clear-cut, significant positive effect in diminishing the time to recovery." He added that this is "a very important proof of concept, because what is has proven is that a drug can block this virus."

Former FDA commissioner Dr. Scott Gottlieb said he thought this study would likely provide enough evidence for an FDA emergency use authorization. Remdesivir, coupled with therapeutic antibodies, better testing, and learning how to treat COVID-19 patients more effectively in the hospital "could reduce the risk in the fall and allow us to get back to some semblance of our normal lives even with COVID circulating in the background," he told CNBC.

Remdesivir is a nucleotide analog, in the same drug class as the HIV medication tenofovir and the hepatitis C drug sofosbuvir, both also manufactured by Foster City-based Gilead. These drugs interfere with a viral enzyme and prevent viruses from copying their genetic material.

NIAID trial
The latest findings come from NIAID's Adaptive COVID-19 Treatment Trial, which has study sites in the United States and several other countries. This analysis included 1,063 hospitalized patients with advanced disease who were randomly assigned to receive remdesivir or an inactive placebo administered by intravenous infusion. The first participant was an American who had been quarantined on the Diamond Princess cruise ship docked in Japan.

According to Fauci, the independent data and safety monitoring board overseeing the trial notified him and the study investigators on Monday that remdesivir worked significantly better than the placebo. The median time to recovery was 11 days in the remdesivir group compared with 15 days in the placebo group — a 31% improvement.

The study also saw a trend toward improved survival, with mortality rates of 8% in the remdesivir group versus 12% in the placebo group, but this did not reach statistical significance, meaning it could have been due to chance.

Fauci compared the announcement to the early days of HIV drug development.

"This is reminiscent of 34 years ago, in 1986, when we were struggling for drugs for HIV. We had nothing, and there were a lot of anecdotal reports that maybe they work, maybe they don't," he said. "We did the first randomized, placebo-controlled trial with AZT, which turned out to give an effect that was modest, but that was not the end game. Building on that, every year after, we did better and better."

Fauci suggested, based on these findings, that remdesivir would likely become a new standard of care that could be used as the comparison or control treatment when studying new therapies. He also noted that studies of remdesivir in combination with other drugs are underway.

Severe COVID-19 illness is caused partly by the coronavirus itself and partly by the immune system's response to it. For this reason, combining antiviral medications that stop virus replication with anti-inflammatory drugs that control the excessive immune reaction known as a cytokine storm might lead to the best outcomes.

Other remdesivir studies
As the world eagerly awaits treatments for the new disease — which has now killed more than 60,000 people in the United States and nearly 225,000 worldwide — conflicting information about remdesivir from anecdotal reports, leaks, and preprints of unpublished studies have given a confusing picture of its effectiveness in recent weeks.

As the Bay Area Reporter previously reported, last week the medical news site STAT leaked results from a randomized clinical trial of remdesivir in China. The findings, which were accidentally posted to the World Health Organization website but quickly taken down, were published in April 29 online edition of The Lancet.

That study enrolled 237 COVID-19 patients at 10 hospitals in Hubei, before it was prematurely discontinued due to a shortage of participants once the epidemic there was brought under control. Remdesivir did not significantly speed up improvement of symptoms or reduce the likelihood of death compared with a placebo, although the study did suggest faster improvement among those treated earlier. The Chinese researchers also saw no significant differences in length of hospitals stays, time on ventilators, or how long to took to clear the virus.

In related news, Gilead on Wednesday announced early results from the company's SIMPLE trial, which is comparing five versus 10 days of remdesivir in patients hospitalized with severe COVID-19. The study aims to enroll about 6,000 people worldwide; the interim data released today come from 397 participants.

Both regimens appeared to work about equally well. The median time to clinical improvement was 10 days in the five-day treatment group and 11 days in the 10-day group. At the two-week mark, 60% of people on the five-day regimen and 52% of those on the 10-day regimen had been discharged from the hospital. Here, too, early treatment led to better outcomes, with hospital discharge rates of 62% for those who started remdesivir within 10 days of symptoms onset versus 49% for those who started later. The results differed somewhat by country, with patients in Italy faring worse.

The results from this study are not as useful as those from the randomized trials because there was no comparison group that did not receive remdesivir. A majority of people with COVID-19 recover without treatment, so without a placebo group it is hard to know how much the drug helped. But the study did show that a five-day course works as well as 10 days, which means more people could be treated while the drug is in short supply.

"Unlike traditional drug development, we are attempting to evaluate an investigational agent alongside an evolving global pandemic," Gilead chief medical officer Dr. Merdad Parsey said in a statement. "The study demonstrates the potential for some patients to be treated with a five-day regimen, which could significantly expand the number of patients who could be treated with our current supply of remdesivir. This is particularly important in the setting of a pandemic, to help hospitals and healthcare workers treat more patients in urgent need of care."

Updated, 5/1/20: This article has been updated to include action taken by the FDA.