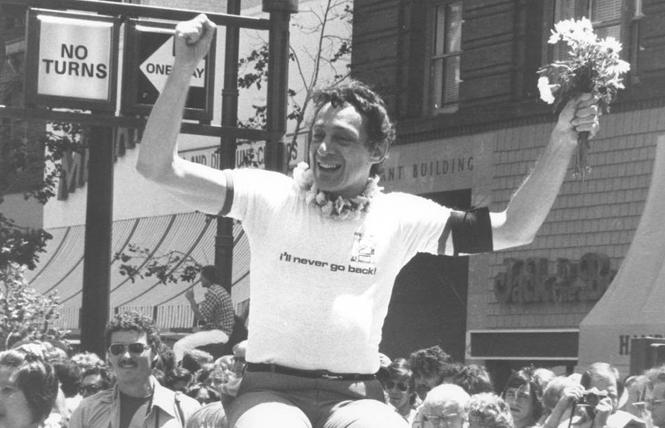 The late supervisor Harvey Milk led a coalition of different groups against the 1978 Briggs initiative that would have barred LGBTs from teaching in public schools. If went down to defeat that November. Photo: Courtesy GLBT Historical Society

We, the undersigned, are members or allies of the lesbian, gay, bisexual, transgender, and queer community in the city of San Francisco. The COVID-19 crisis has brought pain to all of our communities, and many have risen to the moment. But it has also awakened forces that we must reject with a strong voice.

No two epidemics and no two historical experiences are the same, but the horrors our community faced in the AIDS epidemic command us to stand in solidarity with communities facing injustice and violence today.

In the early years of the AIDS epidemic, LGBTQ people were targeted with violence and hate because of the virus, and our suffering was ignored by those with the power to do something about it.

Today, the Trump administration and other leaders have painted a bull's-eye on the backs of Asian Americans with racist rhetoric about the "Chinese virus," and certain public personalities and government officials argue that if "saving the economy" requires the death and suffering of older adults and people with disabilities and chronic illnesses, then we should turn away from them.

To both sentiments, we say: No.

In the current crisis, as a result of Trump's poisonous rhetoric, Slate reports that "people of Asian descent have [reported] being yelled at, being beaten, their children attacked and their businesses boycotted." The Los Angeles Times reports that one advocacy group "has received more than 1,000 reports from people in 32 states detailing verbal abuse, denial of services, discrimination on the job or physical assaults." In Texas, a man attacked an Asian American family — including small children — with a knife. The New York Times reports that Asian American leaders "have sounded the alarm about Republican messaging that they say stigmatizes their community and fans racism."

Simultaneously, politicians, television personalities, and publications have told older adults and people with disabilities and chronic illnesses that their suffering should be ignored if doing so will protect the economy. One writer argued that the virus "overwhelmingly strikes the elderly or the already severely sick. Sad to say, those victims were already nearing the end of their lifespans." As Dr. Robert Butler (who first coined the term "ageism") wrote, "Ageism allows the younger generation to see older people as different from themselves; thus they subtly cease to identify with their elders as human beings." As transgender rabbi and disability rights advocate Elliot Kukla put more bluntly in the New York Times last month, "Don't they know sick and old people can read?"

We have seen this before.

In the 1980s, as public knowledge of AIDS grew, so did violence against LGBTQ people. In a November 1986 New York Times article, one community leader reported "We're in the middle of an epidemic of violence against gay men and lesbians" because of public fear of AIDS. One member of Congress decried "dramatic increases in violence directed against gay men and lesbians, and the violence seems to be connected with the AIDS problem.'' Hate crimes, including murders, doubled over the course of one year.

The suffering of LGBTQ people and people with HIV/AIDS was also ignored, with devastating results. In 1982, after 1,000 people had already died of AIDS, a journalist asked President Ronald Reagan's press secretary, Larry Speakes, if the president had "any reaction to the announcement by the [Centers for Disease Control and Prevention] that AIDS is now an epidemic." Amidst laughter, Speakes joked, "I don't have it. Do you?" The journalist asked: "Is the president concerned about this subject, Larry?" And the press secretary replied, "I haven't heard him express concern." Reagan would not seriously address HIV/AIDS for another five years, after 21,000 people had died.

The fundamental message of the LGBT civil rights movement is that all human beings have worth, possess dignity, deserve equality under the law, and that our communities' struggles are tied together. LGBTQ communities — which includes people who are Asian American, older adults, and people with disabilities and chronic illnesses — must stand together now and always against hate and injustice.

In a June 1978 speech at San Francisco Pride against a ballot measure that would have barred LGBTQ teachers from public schools, Supervisor Harvey Milk said: "No more racism, no more sexism, no more ageism, no more hatred. No more." And in this age of pandemic, we repeat these words and stand by them.