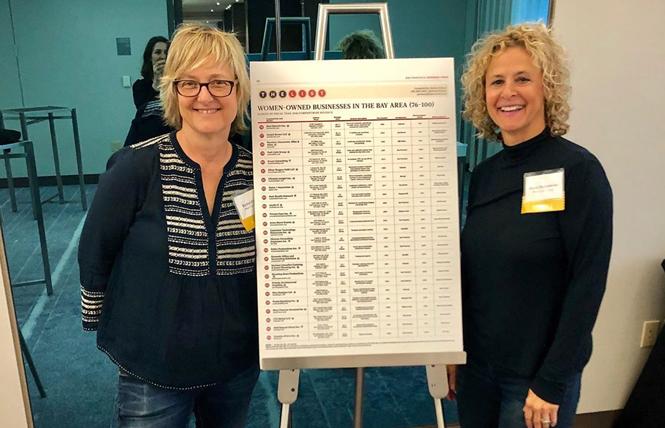 A lesbian-owned chain of local cafes will be the first LGBT business to open inside the Harvey Milk Terminal 1 at San Francisco International Airport.

It will be the fifth location for the Park Cafe Group, overseen by married couple Rachel Herbert and Dana Oppenheim. They will be opening a Dolores Park Cafe at SFO in the terminal's Boarding Area C, which is the pre-existing part of Harvey Milk Terminal 1, sometime this fall.

Both of the locations are near the heart of the city's LGBT Castro district, where in the 1970s Milk owned a camera store. He would make history in November 1977 by winning election as the area's supervisor, becoming the first gay person to win a political office in San Francisco and California.

SFO spokesman Doug Yakel confirmed to the B.A.R. Tuesday that Herbert and Oppenheim, who joined the cafe business in 2007, would be the first concessionaires inside the Milk terminal from the LGBT community. Last July, the first nine-gate section of the remodeled terminal became operational and sported a number of locally owned eateries.

Later this month another nine gates will open inside the terminal, which is undergoing a $2.4 billion renovation that will wrap up in 2023. Informed this week by the B.A.R. that they were the first LGBT business to sign a lease inside the Milk terminal, Herbert was ecstatic.

"That feels amazing! It is definitely cause for celebration, that is really cool!" she said. "Harvey is such a historic figure, and it is really amazing and wonderful that we have a terminal named after such an important figure in LGBTQ history. I just assumed another LGBTQ business was in the terminal."

The Board of Supervisors' Budget and Finance Committee approved the couple's lease at its meeting Wednesday, March 11, and the full board is expected to finalize it later this month. According to the lease terms, the Park Cafe Group is leasing a kiosk space for 10 years in the Milk terminal with a minimum annual guarantee of $240,000 for the first year of the lease.

The company had the highest score out of seven applicants for the 300 square foot kiosk space. It was one of two concession areas the airport had set aside for small businesses — the other being in SFO's Terminal 3 — with gross revenues below $7.5 million per year for each of the past three years.

"It just seemed like a really good opportunity," Herbert said about opening at the airport. "We have been approached numerous times by people wanting us to license our name for a location at the airport. Finally we thought, 'Why don't we go for it ourselves?'"

The airport location will be more of a grab-and-go concept, but there will be counter seating for customers who have time before their flight to sit down and eat. The cafe will offer hot and cold coffee and tea drinks, organic smoothies and juices, and foods like breakfast bagels, made-to-order paninis, and pre-made cold sandwiches and salads.

The coffee will be brewed from their own beans under the label Park Coffee Roasters. Over the last month the women have rolled out their in-house coffee brand to all four of their cafes.

They also operate Precita Park Cafe at the bottom of Bernal Heights in San Francisco and the Paradise Park Cafe in North Oakland, which opened in 2017. Their expansion to the airport comes amid a drop-off in airline travel due to the coronavirus outbreak.

Herbert expressed optimism that by the time they open later this year, health officials will have a better handle on the global pandemic. She told the B.A.R. that the existing cafes have not seen a downturn in business due to the health crisis.

"We operate more neighborhood cafes and as such they are really weather dependent. Whenever it is cold and rainy we are not very busy," she said, "So it is really hard to tell. It is too early to tell what the impact would be."

For more information about the Park Cafe Group, visit http://www.doloresparkcafe.com/.

The annual Lesbians Who Tech conference announced March 3 it was postponing its 2020 summit in the Castro to early August due to the coronavirus outbreak. Previously held in the winter months, the summit organizers had already pushed back the yearly gathering to April of this year.

In an email announcing the decision the summit's founder Leanne Pittsford noted that "after many discussions with local health officials, our partners, our venues, and our community, we have decided to postpone our San Francisco Summit to a later date."

It is now expected to take place August 6-8 with a potential pre-summit day on August 5. But those dates could change depending on permitting issues with the city and other factors; for more information, visit https://lesbianswhotech.org/sanfrancisco2020/

And after insisting last month that the 37th IGLTA Global Convention would take place May 6-9 in Milan, organizers of the International LGBTQ+ Travel Association get-together announced March 9 they were postponing it until this September or October.

They were forced to do so when Italian officials effectively shut down the country to outside travelers and placed their citizens on mandatory quarantine in order to stop the spread of the coronavirus.

"We believe firmly in the resilience of travel and want to be part of the industry's recovery when COVID-19 has been contained with confidence," stated IGLTA's board of directors in announcing the postponement.

For more information or updates, email convention@iglta.org or visit https://www.igltaconvention.org/